Pizza by the lake 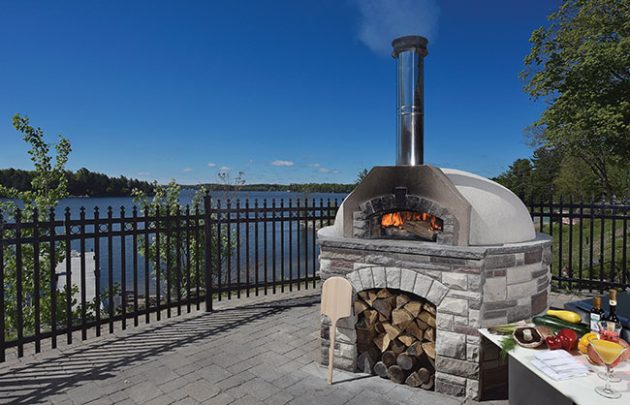 Ontario’s cottage country, north of the Greater Toronto Area, has been known for a great many things – crystalline lakes under azure skies, seemingly endless forest, resorts and cottages where family memories are made, the call of a distant loon waking the world – but great pizza wasn’t one of them.

In recent years, several outlets specializing in gourmet wood-fired pizza have opened across the region north of Toronto.

These days pizza tradition meets innovation as these restaurants expand the area’s dining horizons and delight customers who’ve built up healthy appetites carousing in the sun.

The Deck, JW Marriott The Rosseau Muskoka Resort, Minett, Ontario
Muskoka wears its appeal proudly on its sleeve: it’s all about the beautiful, refreshing lakes that draw us like a siren’s call. Summer days revolve around them, so much so that people are reluctant to pull themselves away. Even to eat.

That posed a problem for JW Marriott The Rosseau Muskoka Resort because everyone knows that a hungry guest is not a happy guest. And, of course, every meal skipped is money out of the resort’s coffers. The solution was simple in concept, if not in execution: If you can’t lure people away from the water for meals, then you bring the meals to them.

It was a dilemma not exactly foreign to director of food and beverage Shaun Crymble. He has worked at some of the finest resort restaurants in the United States, and before that but he cut his teeth at a small lodge in northern Ontario, where he cooked trout caught daily from the lake right outside the door.

“In 2015, we introduced a wood-fired pizza oven to The Deck, our lakeside and poolside bistro setting,” Crymble says. “Wood-fired pizza is ideal for the setting because it bakes quickly, just 90 seconds in the oven, which means customers get their pizza in minutes. And because it’s fast and easy to produce, it streamlines The Deck’s kitchen and doesn’t stress our staffing levels.”

Efficiency is important. Between noon and 3 p.m. on an average summer day, the Deck makes 200 pizzas. But maintaining the high level of culinary standards for which JW Marriott The Rosseau Muskoka Resort is famed is equally important. No dish other than wood-fired pizza could meet these seemingly contradictory requirements.

The pizza oven was an immediate success and has become a focal point of lazy summer days at the resort. Guests loved being able to get a delicious meal and return to their deck chairs, never straying from the water. “The pizza oven creates a great vibe on The Deck,” Crymble says.

Crymble has also used the oven as part of team-building exercises. “We have a tasting day with associates to determine which pizzas go on the menu,” he explains. “Everyone makes a pizza and collectively they critique them.”

The Deck’s wood-fired pizza is now a calling card for the resort, an asset that lures summer guests as much as does its warm hospitality and many amenities.

Pie Wood Fired Pizza Joint, Port Carling, Ontario
The first thing you notice about Craig Russell is his passion for pizza. The co-owner of Pie Wood Fired Pizza Joint loves a great-tasting wood-fired pizza, and it was the scarcity of places north of Toronto to enjoy them that led him to found the restaurant that currently has four locations (two in Barrie, two in Muskoka).

“Thin-crust wood oven pizza checks off a lot of boxes,” he says. “The smokiness of the wood oven is a huge part of its appeal, it bakes quickly, and because its typically not overloaded with toppings we can be a bit more artistic.”

But it’s a pizza that Russell discovered was underrepresented – almost non-existent – north of the Greater Toronto Area. He wanted to fill that void. 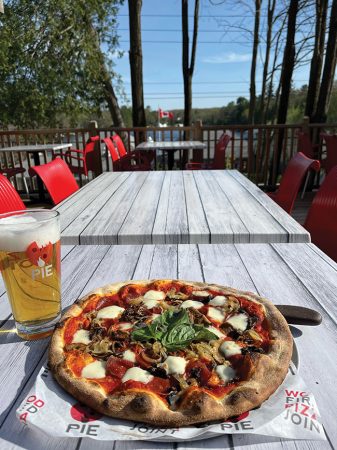 After the success of two Barrie locations, Russell eyed Muskoka as the next frontier for wood-fired pizza. “Muskoka had a lot of appeal for us. It’s a location with a lot of activity and great energy, with lots of tourists from all over the world and seasonal residents from the GTA, so it’s a natural for a pizza style that’s fresh and exciting,” he explains. “Wood oven lends itself to the area – it’s artisanal, it’s romantic and yet rustic, and there’s a real synergy between a wood oven and the forest that surrounds us.”

Russell took a leap of faith. Pie’s first restaurant was summer-only. Perhaps appropriately given the area, the outlet was housed in a refurbished boat garage, in Torrance. It served its purpose, proving there was a market. Furthermore, customer feedback made Russell certain a year-round restaurant was viable, despite the highly seasonal nature of Muskoka.

Late summer 2021 saw the opening of Pie in Port Carling, a hip and vibrant village that deserves its moniker “Hub of the Lakes.” It’s a full-service restaurant with a liquor licence and views of the water.

At the same time, Pie launched a pop-up location at Walker’s Point Marina, in boat-busy Gravenhurst, essentially serving as a boat drive-thru. It’s an innovation specifically geared to the Muskoka’s summer lifestyle and has proven to be remarkably successful. 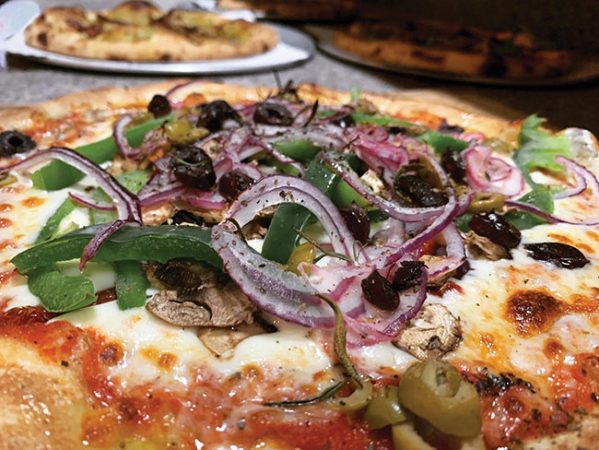 Maurizio’s Pizzeria, Parry Sound, Ontario
Maurizio Mascioli is an award-winning pizzaiolo, having competed and won medals on behalf of Canada at the International Pizza Championships. But he considers introducing thin-crust, wood-fired pizza to Parry Sound as among the accomplishments of which he is most proud.

“When you think of Parry Sound what jumps to mind is its beautiful scenery. You just naturally imagine there is beautiful food as well,” he says. “In fact, options are somewhat limited, especially for pizza that isn’t from a box store. I decided to change that.”

Maurizio is of Italian descent – one side of the family hails from the south of the peninsula, the other from Sicily – and so he grew up with thin-crust, wood-fired pizza. It’s really all he knew. When he opened Maurizio’s Pizzeria in 2013, he was excited by the prospect of sharing his love for this Italian staple.

“The beginning was a bit of a challenge because we had to do a lot of education for folks here. People only know what they know. Most simply weren’t familiar anything other than box store pizza,” he explains. “We had to think outside the box to get people to try thin-crust. They quickly came around because if you use high-end ingredients like we do, each bite is like an explosion of flavour.”

The high-end ingredients Maurizio speaks of include best-quality cold-cut meats direct from an Italian butchery, fresh cheese, sauce and flour sourced from Italy. Vegetable toppings come from local farms as much as possible, but farming in cottage country is somewhat limited. Maurizio – like all regional restauranteurs – has discovered local vendors might not always have the items, or the quantity, required.

Another challenge unique to restauranting in cottage country is the inherent seasonality. It’s feast or famine. “In the summer, with cottagers and vacationers, I work 90-hour weeks. Seventy-five per cent of my customers are seasonal,” he says. “My staff and I unwind and take vacations after Thanksgiving when cottages are closed down and the summer masses are gone.”

“It’s a different pace of life up here, and it impacts business,” Mascioli says, “but I love it.” | CP