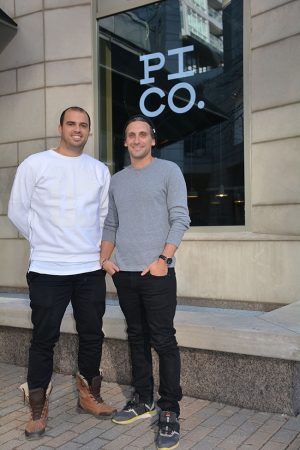 When Marc Askenasi and Sam Hazan were kicking around a soccer ball together in the 1990s, they did not imagine teaming up in the pizza business.

But the childhood friends and partners in Toronto’s Pi Co. have scored big with their build-your-own Neapolitan pizza concept and are busy expanding outside of the city.

I talk with the pair at their Yonge and Eglinton location, where bundled-up customers file in, their eyes on a colourful and inviting ingredients counter. The shop is minimalist and modern with a youthful vibe and a soundtrack of laid-back hip-hop and pop music. “That’s intentional, Askenasi says. “We’re not big suit-and-tie guys.”

Pi Co. makes two pizzas – the margherita and a build-your-own – on a Neapolitan or a gluten-free crust in a 1,000-degree oven for 90 seconds. The margherita is their top seller. “I think when you’re coming to our place, you want to compare apples to apples,” Askenasi says of the thinking behind this dual concept.

It seems their early soccer days bred in them a taste for fun and teamwork that has served them well in the pizza business. The two met at age eight while playing on a rep team in the Toronto area that took them far afield to Europe. Askenasi hails from nearby Richmond Hill and Hazan from Thornhill.

“It was fun,” says Hazan, who continued playing soccer in Europe and in Israel for a while.

Askenasi returned to Canada, got his degree at McGill University and played soccer there as well. While working in the gaming and technology industry for several years after graduation, he harboured a desire to be in the food business but waited for the right time – and the right concept. “I wouldn’t touch it unless it was scalable,” he says.

SEARCH FOR PERFECT CONCEPT
Askenasi found the perfect concept while travelling in the United States, where he saw Neapolitan quick service popping up.

“There’s a time and a place for a nice, greasy New York-style slice, but I’ve always loved Neapolitan pizza,” he says.

Recognizing he needed a strong operator to work with, he thought of longtime friend Hazan, whose family has been involved in food service for 25 years and built up strong relationships with suppliers.

Hazan agreed that’s where the opportunity was and the two went on a fact-finding foodie tour of sorts. They spent the year training with experienced chefs, researching Neapolitan pizza and honing their business plan. “We put our heads down. From Day 1 we were always focused on Neapolitan,” Askenasi says.

They had the idea for their pizzeria, worked on the branding and lastly obtained the intellectual property. In all the process took about a year.

Co-founders and equal partners in the business, Askenasi is president and chief executive officer and Hazan is vice-president of operations.

GROWTH OF DUAL PIZZA CONCEPT
When I talked with the partners in late February, Pi Co. had three locations in Toronto. Bay and Bloor was their first location, but they consider the slightly bigger shop (just over 2,000 square feet, 1,500 of that customer-facing) at Yonge and Eglinton – where we met – their flagship. Their University and Adelaide location is their first franchise location.

They expect to open two or three more stores in April alone, some newly constructed and some existing locations. One of the new spots, at the Shops at Don Mills, is their first shop not located in an urban centre. It’s suburbia, they say, with a different price point.

Their pizzas typically cost $3 to 5 less than others in similar locations. They started with a consistent price point in mind, aiming for growth beyond Toronto – to Kitchener, Hamilton and Barrie – in terms of price and the experience. “Toronto customers can afford one price, but suburbia and small-town customers can afford a different price.”

A separate central dough dispensary, or commissary, is also in the works.

STREAMLINED STAFF
Hazan and Askenasi are big on teamwork: they have surrounded themselves with experts including a community manager, construction manager and dough manager. They hired a regional manager with 10 years’ experience. They recruit people not in big groups but as they need them and they train them months in advance. The store managers have no pizza experience but are hired based on other attributes such as a positive attitude.

Training is not a one-size-fits-all. “We spend a ridiculous amount of time training franchisees,” Askenasi says. “We train them on how to train staff. Some people can fly through it in weeks; some take about three months.”

There is a mixture of full-time and part-time employees – about 10 at each location. All ages are represented, but young people seem to be drawn here. “It’s a fun place to work,” Hazan says. “A lawyer works here, he was a customer first, and now his wife works here too. Actually, we have four couples working for us,” he says, though usually at different locations.”

Hazan is not a trained chef, but has a lot of experience in the kitchen and has worked with a master chef to develop Pi Co.’s recipes. But this concept is not about the chef, Askenasi says. It is firmly in the category of fast food.

“Does McDonald’s have a chef? For us it’s about the experience. You can go to a different city or location and get the same experience.”

REPEAT CUSTOMERS
More than 80 per cent of customers are repeat customers, they say, and by repeat they mean customers who come back multiple times per week.

“We have salads as well as pizza, but I think it’s a result of the brand name, the interior design, the food and the kind of culture and experience we’ve created,” Askenasi says.

Although proud of their success, they are far from complacent. The two are laser-focused on maintaining a relationship with customers. “We always have to be careful that we don’t let our guard down or that we’re not on top of market trends or not interacting with the community around us, and thankful for the customers we have, because that’s when others can come in and steal your market share,” Askenasi says.

“Expanding is not for everyone,” Hazan says matter-of-factly. “I think you have to decide, are you a risk taker?”

Of course, risk is easier to bear when you have the support of loved ones. His wife, Melanie, and Askenasi’s wife, Amanda, have been very supportive of the venture: “That support is important to help you do what you do,” Askenasi says.

What does the future hold for Pi Co.? “We are rolling out 12 more locations,” Askenasi says with a twinkle in his eye. “We have massive plans.”