This year’s Pizza With Purpose winner, The Pizza Mill, keeps finding creative ways into the heart of its community 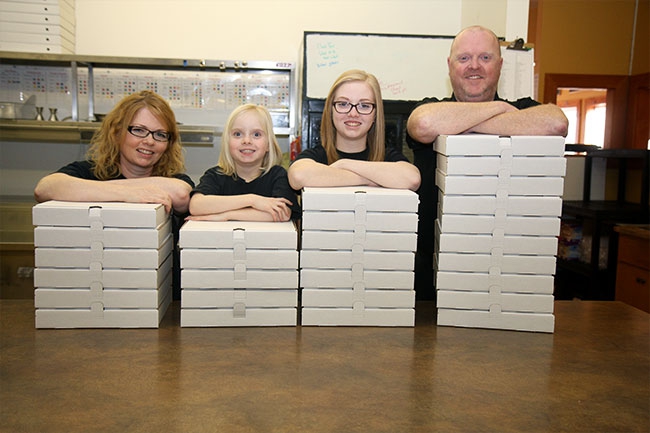 Kathryn and Dave Kitchen have turned the notion of paying it forward into something of an art form.

Since opening the doors of their pizzeria 17 years ago, the Kitchens, who own The Pizza Mill in Salisbury, N.B., have made giving back – and doing it creatively – an integral part of their business. For this reason, they are the winners of this year’s Saputo Foodservice Pizza With Purpose award and its $2,500 cash prize.

Both Kathryn and Dave Kitchen were born and spent their childhoods in Salisbury, returning as adults with a family of their own to run their thriving pizzeria with plenty of support from the village of about 2,000 people.

“When we first opened, the day we opened, we were so busy we couldn’t believe it,” Dave told Canadian Pizza in December. “We achieved our first year’s sales from our projected business plan in the first three or four months. So right from Day 1, the community fully supported us and we quickly realized how lucky we were. It didn’t make sense to either of us to take from the town without giving back.”

The Kitchens opened The Pizza Mill in 1998 after they grew tired of struggling to make ends meet. Dave, a part-time courier and delivery person for a pizza place in Moncton, noticed a small commercial space available in Salisbury. They renovated the rented two-bedroom apartment with first rights to buy it if it ever came up for sale, Dave said, but by then they knew they would outgrow it. After three years in business, they bought the lot next door.

There is no division of labour at the hopping pizzeria. It’s all hands on deck for their seven employees, who are trained to do all jobs, from working the front counter to prep and pizza making.

Dave describes Salisbury as a family-oriented town that is home to more than the average number of good people.

“When we see something we don’t feel is right going on, this town is very good at coming together and fighting against those kinds of injustices,” he said.

Dave estimated that in a given year six to 10 fundraisers are “thrown together” for someone who has a sick child spending a month at Izaak Walton Killam Hospital for Children in Halifax (known as the IWK) or someone who has a family member fighting terminal cancer. “I’ve seen fundraisers raise as much as $80,000 in one day,” he said.

“This is what this town does. They wait for the opportunity to help and they jump in,” Dave said. “That’s the main reason we did our Charity Pizza Cards.”

The pizzeria sells $1,000 in coupons for $10 each, depending on costs. Of the $10 they receive, tax included, they keep $8 to cover costs and donate $2 from that to a local charity. They put that money in a separate account and always have $2,000 at the ready to help charities.

“By doing it this way, we can just write them a cheque. It works great. What it boils down to is that we are donating our time. For the next three or four months we’re going to be giving away all these ‘free’ pizzas. We’ve sold them but we haven’t yet made them,” he said.

There are other motives for running this campaign in December, he added. “The first three months of the year are normally slow in every business. This keeps customers in the habit of coming out for pizza.

“What it also does is it keeps my staff busy and gives me enough work to keep them all here. We never lay people off. I can’t think of one person we’ve ever laid off,” Dave said.

Although it’s hard to gauge how many gift pizzas will be redeemed daily during this period, baking an extra batch of dough helps them keep pace with orders.

HOLDING COURT FOR a cause
A celebrity basketball game the Kitchens helped organize and host got a lot of attention in spring 2014. A group called Dave looking for a door prize or sponsorship. “I said, leave it with me. I think we can do better than that,” Dave said. Thus the Salisbury and District Recreation Council and Minor Basketball Program Pizza Give Away was born. In a spirited and much-watched game, Dave competed against a 6’9” centre from local pro basketball team The Moncton Miracles.

“It got more views on my Facebook page than anything we’ve ever done. I had as much fun as the kids did, but the goodwill that came out of that – that cost me 11 pizzas – was phenomenal. It’s still going around. I still have people come up to me and say that basketball game was funny.”

There is no shortage of good causes to support, but the Kitchens have learned to focus their efforts wisely; for example, they no longer sponsor athletes or teams. “If I sponsor someone, that puts my name on his sweater, but my $100 could help a lot more kids at the high school. We try to get more bang for our buck,” Dave said.

Rewarding those who care
Among all their efforts, the family’s favourite cause is the Gaspereau Award, Dave said. They have always given a small bursary to a high school student who may not otherwise get an award: they may not have had high marks, or excelled in sports or chosen to attend post-secondary education.

But a quirky news story inspired them to bolster the prize and rechristen the award. Local high school students used buckets, lacrosse nets and other makeshift tools to rescue gaspereau fish stranded on their school grounds after the Petitcodiac River overflowed.

For the last two years, The Pizza Mill has given $1,000 and a symbolic silver bucket award to the JMA Armstrong graduating student who through the course of their high school career “has demonstrated the highest qualities of citizenship, showing passion and conviction in the areas of honesty, integrity and moral ethics,” Kathryn wrote in their contest entry, and “exemplifies the strength of the human spirit to achieve great things to benefit others and therefore reflects ideals of courage, care and concern for the environment, and humanitarian needs.”

Principal William Robinson expressed in an email the school’s appreciation for the Kitchens’ contribution: “This gesture is another example of how supportive corporate citizenship, even in a small village, not only reinforces that the greater ‘community’ should help raise a child, but also, through its individual groups and business leaders, recognize those accomplishments and characteristics that will ultimately serve to sustain it. As a school community serving Salisbury and several connected areas, we are grateful!”

Experienced support firsthand
Dave and his family know firsthand how it feels to be supported by their town. Younger daughter Emmy was diagnosed before she was born with a condition called Dandy Walker syndrome (DWS). “It’s a brain malformation which is usually, nine times out of 10, fatal. There are a lot of complications that can go with it. The community really got around us. We didn’t need money but a lot of people supported us and prayed for us. Very good friends of ours let us yell and rant and be mad and go through that whole roller-coaster of emotions we went through,” he said.

People still ask how Emmy, whose full name of Emmanuelle means “God with us” – is doing, Dave said. The community was “very loyal and very supportive,” he said, “which magnified our need and our desire to help the community.” One of many causes The Pizza Mill gets behind financially is raising awareness for the Dandy Walker Alliance, a group that educates and supports families with the DWS diagnosis.

How do they organize their initiatives? “We give all the receipts to our accountant and she says, ‘What did you do?!’ ” he said, laughing.

“I’ve always been a creative guy with some crazy ideas. Kathryn is much more methodical and down to Earth. Put those together and it works really well,” he said.

Dave’s advice to others wanting to get involved in their community is simple: “Don’t fake it. If you see areas where you can help, help. If you played hockey growing up and realize the potential of what that can teach a child, and if you’re really drawn towards helping, just jump right in.

“Do it honestly and with a clear conscience. Do it for the right reasons, he said. “There are opportunities everywhere to make people’s lives better.”

Related
The Pizza Mill wins Pizza With Purpose award
From the Editor’s desk: April-May 2015
Are you serving pizza with purpose?
Make Pizza with Purpose – and tell us about it