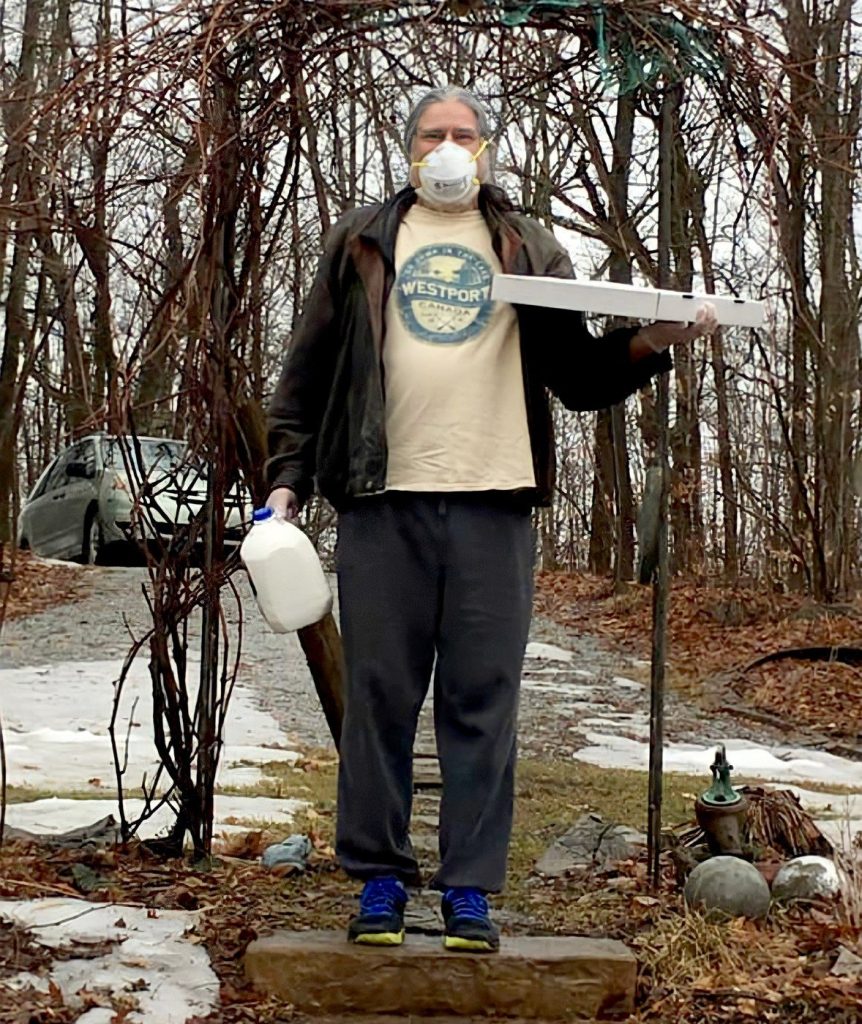 Ken Rose, a Westport, Ont., resident, started delivering free pizza to the community during the pandemic. He once delivered a pizza, a gallon of milk and toys to a family. (SUBMITTED PHOTO)

Westport, Ont. – Throughout the COVID-19 pandemic, Westport, Ont., resident Ken Rose has been bringing kindness to the village through community-centred initiatives.

One of the initiatives, Pandemic Pizza, has reopened to help beat the Omicron blues while filling neighbours with happiness in the form of a pizza of their choosing.

As the pandemic has again temporarily closed indoor dining, Rose thought he would reopen Pandemic Pizza, which was first launched in the spring of 2020 and has continued on during the different waves of COVID-19 as a way to support local restaurants and share the gift of free pizza with the community.

“I have a lot of gratitude for this town,” said Rose of the village that lies about 100 kilometres southwest of Ottawa. “My life changed when I came here. People are so welcoming and kind.”

Before Pandemic Pizza began, Rose saw the kindness the village had to offer. When his wife got sick, many residents shared their support, up until her death, by offering meals and desserts; restaurants offered free food and more, explained Rose.

According to Rose, Pandemic Pizza started with a simple idea of giving a free pizza to a family who he thought deserved it.

Once he had delivered the pizza to the local family they asked if they could pay it forward and like a domino effect it continued on. Shortly after, Rose decided to share the idea on Facebook to see if others in the village wanted to participate.

In the beginning he would find out what kind of pizza the family or individual would like and then went around the village to deliver it to them, but he noticed people were self-isolating or feeling hesitant about visitors. He eventually decided to switch things up to where people could pick up the free pizza themselves and that continues on now.

“Kindness encourages kindness,” said Rose. “It’s the little things we do for people that matters as much as bigger things.”

While picking up the pizza on their own is more common now, he will still deliver it if needed, which can be safety done by leaving it at the door and wearing a mask, said Rose.

Since reopening Pandemic Pizza on Wednesday afternoon, seven free pizzas have been promised or nominated within 24 hours. According to Rose, the first pizza that was awarded went to the Westport Pharmacy as a way to show appreciation and gratitude for their service as they continue to work through the pandemic.

Anyone can nominate a family, business or individual, said Rose, adding that if a nomination doesn’t come in with a donation, he will pay for it himself, despite being retired.

“The people who nominate should be very proud of themselves. They’re thinking about someone else,” said Rose.

He likes to keep who nominated those who have been gifted a pizza a mystery; he wants them to believe they have many admirers, which is often true. He said he sometimes gets nominations for the same person many times.

“There are people who don’t realize it but they are loved because of what they do for others,” said Rose, adding he doesn’t find people nominating others because they’re in financial troubles or in need of it but because of their kindness or other reasons like a birthday.

Those who have been nominated for a Pandemic Pizza are notified by Rose and will be able to use secret words to order, pick up and get the free pizza of their choosing from either Tangled Garden Cafe or Steve’s Rideau Restaurant.

People who would like to nominate someone in the Westport area can do so by emailing Rose at pandemicpizza1@gmail.com.

The Pandemic Pizza initiative will continue until the restaurants open again.

Throughout the pandemic, Westport Shares, a local grassroots charity, created by Rose, that helps locals get through sudden financial hurdles has continued on. The small group of local board members respond within 24 hours with a decision on how they can help.

Either the person in need contacts the charity or someone they know does it on their behalf. The charity operates quietly and privately.

For financial help, or to donate, residents can email Westport Shares at westportshares@gmail.com.