Pizza Expo 2014 intrigued us, inspired us and felt a lot like home 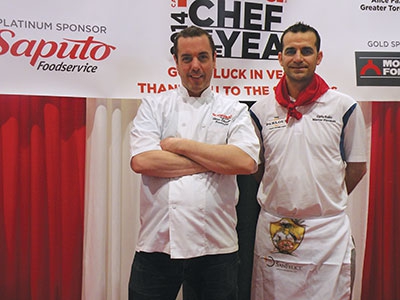 Steve Silvestro and Carlo Raillo served us proud in the International Pizza Challenge at Pizza Expo in Las Vegas.

For three days in March, we at Canadian Pizza were fortunate to be embraced by some of the friendliest, savviest, most enthusiastic – OK, I’ll say it, most passionate – pizza industry people one could hope to meet.

For three days in March, we at Canadian Pizza were fortunate to be embraced by some of the friendliest, savviest, most enthusiastic – OK, I’ll say it, most passionate – pizza industry people one could hope to meet.

“It’s one big family” is how several people described Pizza Expo in Las Vegas as they tried to put into words the scope and significance of so many American and Canadian pizza aficionados congregating in one special, aroma-filled place dedicated to learning about and celebrating the pie.

This year’s Expo had much to offer, providing plenty of seminars and demonstrations for those hungry to learn, showcasing lots of new products and playing host to a Canadian invasion at the International Pizza Challenge.

Stromboli, a type of turnover, is great for parties. It can be served with marinara for dipping sauce and makes an appealing dish for catering.

Garlic knots, made from a one-ounce dough ball and melted, sautéed butter are a customer favourite, said Freehof. Another appetizer trick is to mash up toppings such as spinach, chop them, knead the mixture into the dough for even distribution to create a flavourful dough that could be used to make sausage or spinach rolls.

Freehof said he typically makes two lasagnas for the lunch crowd and three for dinner. He says he has had success with four-cheese lasagna but offering meat and vegetables as add-on items the server can upsell at the counter.

For dessert, he suggested serving cannoli as long as they are made using a high-quality non-grainy ricotta cheese and the filling is sufficient so as not to disappoint customers. Adding a mixture of super-fine powdered sugar, almond extract, and white chocolate could make cannoli look both delicate and worthy of an extra dollar price point.

A sampling of new products
The sampling continued on the show floor as Canadian Pizza ventured out to see what is new in the world of pizza. A number of products caught our eye and taste buds.

A family company from India, VentIt, and its product, the “world’s first breathable” pizza box, greeted show-goers just inside the door. The company is looking for a distributor in North America for its innovative box, which features vents on both top and bottom. Visitors to the booth saw a demonstration under Plexiglas showing the reduction in moisture brought about by the company’s dual venting system.

Not far away, the Pizza-Savor from Big Dave Ostrander, also known as the “Pizza Doctor”, caught people’s attention with its clever way of illustrating its mesh screen inside  a miniature pizza box model. The company says a mesh screen the full size of a pizza box sits inside the box, keeping away from the bottom and free of grease. The device, which is being targeted to high-end pizzerias, is available through Montreal’s Stromboli.

Quality by Liones was offering the SpeedKnife, an ergonomically designed two-wheel pizza cutter it says cuts a straight line every time because one wheel follows the other. The full handle and large guards help prevent injury. Conveniently, the blades and bearings may be removed for cleaning using a coin to turn the fastener.

At the Manzo Food Sales and San Felice booth, Chef of the Year Carlo Raillo  made pizzas at the wood stove and chatted with visitors when not competing in the International Pizza Challenge. Manzo, a distributor,  was offering La Regina di San Marzano DOP (roughly translated to “protected designation of origin”) imported Italian tomatoes, which are thinner and pointier than Roma tomatoes, and Tutto Calabria Hot Long Chili Peppers.

Atalanta had a buzz going at its booth with its Sweety Drop peppers, winner of a 2014 Food and Beverage Innovations award. The tiny drop-shaped Peruvian peppers, more sweet than hot, were on the lips of many a visitor.

Scelta Mushrooms came to Pizza Expo with a solution to the problem of mushrooms losing their taste and texture when packaged. Scelta’s EcoPouch seals in the flavour of mushrooms. No chemicals are added, says the company. The mushrooms sit in their own juices – “Use the juice” is the tagline – and retain their texture. The pouches are available in retail or industrial portions.

Picard Ovens offered a sneak peek of its Hot Rocks model oven, which can reach temperatures of 900 degrees and offers three-unit stackability and exchangeable right and left conveyors. The company is making minor improvements on the model, which it expects to be available this fall.

On the software side, there were lots of solutions featured, among them Ireland’s ZinMobi, a manufacturer of mobile marketing technology that is used in several of Ireland’s pizza, restaurant and fast food chains. The company is now offering its platform and services in Canada. The software uses purchase behaviour analytics and algorithms to create customer profiles, which are then used to trigger customer purchases via targeted, timely and relevant messages and coupons.

Canada MAKES ITS MARK
The heart of Pizza Expo, as always, was the International Pizza Challenge, which this year boasted a cadre of Canadians who showed we are a pizza force to be reckoned with. In the finals of the Traditional category, three competitors out of eight were Canadians. John Pizzo of Veloce Italian Kitchen in London, Ont., and Armando’s Pizza in the Windsor area took third place in the category.

Canadian Pizza’s Chef of the Year runner-up Steve Silvestro of Alice Fazooli’s in Toronto and Meghan O’Dea of Pi Gourmet Eatery in St. John’s, N.L., rounded out the Canadian contingent in the Non-Traditional category. Silvestro’s Pizza Americano featuring San Marzano tomato-based sauce, 90 grams of mozzarella and in the chef’s words “as much pepperoni as will fit on the pie.”

Congratulations to all Canadians who showcased their craft with class in the friendly but competitive Challenge.

We trust that, like us, operators in attendance slipped several ideas into their tote bags, and we suspect that if they put into action even one-tenth of what they saw and learned in Vegas, it promises to be a profitable year for pizza in Canada.