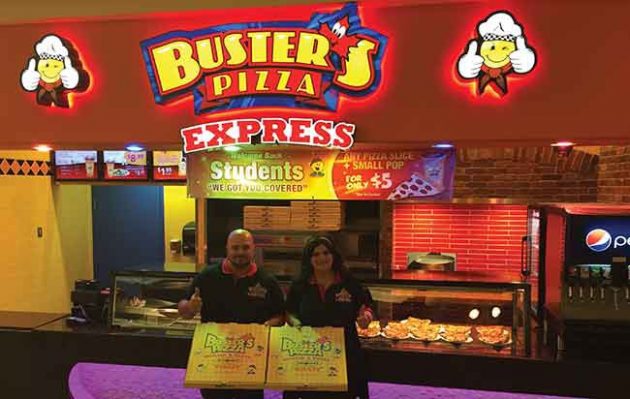 Akeed and Magdalena Salame together have built a thriving pizza business in Alberta. Support is crucial to success in any venture, Akeed says Photo courtesy Buster’s Pizza, Donair & Pasta.

Buster’s Pizza, Donair & Pasta CEO Akeed Salame has fond memories of working at his parent’s pizzeria as a child.

“I can remember being around seven or eight years old, and going straight to the shop after school with my brothers and sisters to make pizza boxes and help out at the restaurant,” Salame says. “It wasn’t straight home or to the babysitter for us. It was to the restaurant. Thinking back about it brings back great memories.”

Salame continued working in the restaurant business and at the age of 19, owned a Keg restaurant inside the Key West Inn in Devon, Alta. From the same kitchen, he operated a pizza joint, Key West 2-for-1, later selling that business to open another pizza and family steakhouse in Redwater, Alta. A few years later, Salame decided to sell that business as well and take some time off.

Pizza always a remained a passion for Salame and opening his next location happened quite by chance; a previous customer from his restaurant in Devon was the leasing manager of an Edmonton-area shopping centre and invited Salame to open a pizzeria in the mall.

“You’re the best pizza operator I know,” he told Salame. “I have just the place for you. I’m sure you’ll know what to do with it.”

Interested, Salame stepped outside of the mall and noticed a Blockbuster video store. The large blue sign with yellow lettering always caught his attention. Looking at the sign, Salame rolled the Blockbuster name over in his head and then everything hit him – he was going to open a pizzeria and call it Buster’s.

Buster’s Pizza. It had a nice ring to it that inspired and excited him. From the very start, Salame knew that he would seek out and use the best quality of ingredients, making everything fresh in house. He would perfect the menu and deliver a product that, in his own words, “would bring families together” as he had witnessed pizza do for generations of families while working as a kid at his parents’ pizzeria and later at his own businesses.

In 2001, realizing a dream through a chance encounter, Salame opened up the first Buster’s Pizza in Edmonton’s Millwood district.

Salame says franchising out was something he wanted to do, but slowly.

“My parents always told me to climb a ladder one step at a time to reach the top – and that if you climb too fast you can fall,” Salame says.

But as the success and popularity of Buster’s Pizza grew, he had customers wanting to open a Buster’s location of their own. When the right employee came along, he decided to franchise out. “I knew how they worked, and felt that they’d really do well with it. So, at that point, franchising Buster’s became an opportunity for the both of us,” he says.

“Buster’s was a brand that I built up so it was hard to even think about entrusting it to someone else,” he explains. “But I liked this employee, knew how they worked, and felt that they’d really do well with it. So, at that point, franchising Buster’s became an opportunity for the both of us.”

In 2004, the second location opened as a franchise and Salame says things just took off from there. Three more locations opened in 2006, and the growth just kept happening year after year to its current size of 14 Buster’s Pizza’s spread out across Alberta including Fort Saskatchewan, Red Deer, and several locations in the Edmonton area.

While the decision to franchise out has been a great opportunity for his family, Salame cautions that it’s not a decision to take lightly. He says owners need to do their research and be sure of whom they’re picking to help carry the brand.

“You give the operator the system but it’s really the operator who will make that store work,” Salame explains. “It’s crucial to pick the right people. When you know someone – have worked with them – you know how they operate, how dedicated and passionate they are, and that makes it easier to judge whether they’ll help continue and carry the brand you worked so hard to develop.”

When you know someone – have worked with them – you know how they operate, how dedicated and passionate they are, and that makes it easier to judge whether they’ll help continue and carry the brand you worked so hard to develop, Salame says.

Quality and consistency are two other areas Salame says are crucial to a brand’s success, and that’s why he consistently monitors the product coming out of each of the restaurant’s locations. Even now, each store uses the freshest of ingredients, cuts its own meats and makes everything in store.

Salame says he has his eye on opening other locations in Alberta, including Calgary, and also expanding across the country to B.C., Saskatchewan and Ontario.

In addition to pizza and pasta, Buster’s Pizza offers donairs and donair pizza. The specialty item, popular both on Canada’s east coast and in the west, typically features seasoned, thinly sliced lamb, chicken or beef. The menu includes donairs with lettuce, tomato and onion, with tzatziki dill sauce or sweet sauce and wrapped in warm pita bread, and donair meat as a custom pizza topping.

Salame plans on incorporating more from his Lebanese-Mediterranean background and is currently working on perfecting a shawarma recipe – something he expects they will be offering on the menu in mid-to-late 2016.

Family continues to play an important role in Salame’s life. His own children now go to the shop to help make pizza boxes and learn valuable skills and values, just at Salame did years before. And, Salame says that a huge part of Busters’ success is the support he has had from his wife, Magdalena, who he says fell into the pizza business but has been with him every step of the way.

Support, says Salame, is another crucial part of success in any venture, business or pursuit.

“Family or whomever, you need to surround yourself with loving, supportive people,” Salame says.