Let food be thy medicine and medicine be thy food

First Hippocrates in 430 BC, long thereafter the retail supplement
industry and, now, finally the commercial food industry has caught on
to the idea that foods containing healthy, functional ingredients are a
significant marketplace opportunity. 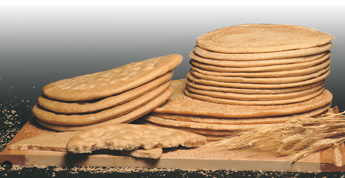 Let food be thy medicine and medicine be thy food.”

First Hippocrates in 430 BC, long thereafter the retail supplement industry and, now, finally the commercial food industry has caught on to the idea that foods containing healthy, functional ingredients are a significant marketplace opportunity.

As we can see, the link between diet and health is nothing new. It’s always been widely recognized that diet plays a strong role in the prevention of chronic disease. Only lately, however, have ingredients like Omega fatty acids created such a high commercial market demand for foods with function beyond just energy.

The modern human diet does not provide the proper amount of essential fatty acids. And since our bodies don’t naturally produce Omega-3s, we need to eat foods that will if we’re going to reap the healthy benefits. Omega-3s are said to lower cholesterol, prevent cardiovascular disease, promote visual acuity and, according to John Michaelides from the Guelph Food Technology Centre, are essential for brain development.

Michaelides said baked goods, especially bread, have a high potential for the delivery of health benefits because they are a staple of the human diet.

It’s important to note that not all Omega-3s are created equal. ALA is primarily derived from foods like soy, walnuts, and flax seed. EPA and DHA, however, are derived from oily fish like salmon, sardines and anchovies. It’s the former, EPA and DHA that are optimal for heart health.

Some of the application challenges are obvious, including an unpleasant fishy odour and flavour. Other issues, however, include sensitivity to heat and other processing conditions, and moisture retention. Fish oils can oxidize quickly, become rancid and affect the taste and shelf life of baked products, said Michaelides.

But what about pizza?

The question of whether Omega oils have a place in the pizza industry has been kicked around the Canadian market ever since Nova Scotia’s Ocean Nutrition Canada developed a product designed to remedy the challenges commonly associated with incorporating Omega into food products.

Ocean Nutrition claims to have found a solution to the problem of trying to put fish oils into foods without compromising taste or perceived quality. Their patented Powder-loc technology enables fish oils to be transformed into a powder, called Meg-3, which is similar to flour in texture and according to Lori O’Connell, marketing communications manager, can be easily incorporated into food products.

Like Hippocrates centuries ago, O’Connell is right when she says more people are looking to food instead of their medicine cabinets for the vital nutrients their bodies need. Canadians especially are raising a generation of young, health conscious label readers.

According to BuzzBack Market Research, about 80 per cent of teens read nutrition labels at least sometimes, and they’re looking for things like functional foods and dietary fibre.

In the same study, teens also said there are some foods they can’t live without. When asked what is the one food they consider a “must have,” pizza rated the highest with one in five mentions.

Is it a stretch to say that pizza fortified with essential Omega-3 fatty acids will have Canadians reaching for a slice?    One woman doesn’t think so.

A.C. La Rocco recently added Meg-3 EPA/DHA to their entire line of par-baked dough for the pizza industry. The company launched the product at the 2006 International Pizza Expo in Las Vegas.

There’s been nothing but positive response, said Leffler. And the company hopes to have the products available to Canadian pizza operators within the next six months.

“When you’re looking at both Canada and the U.S., more and more people are becoming educated about nutrition.”

Even though the low-carb fad died quickly, it did accomplish one thing, according to Leffler. It made more people aware of the different types of carbohydrates.

And it’s those types of lessons that have a direct impact on the foodservice industry.

“It’s just like when you go into Subway now and they ask you what bread you want your sub on.”

The same can be done in the pizza industry. A.C. LaRocco’s Meg-3 organic pizza crusts are par-baked, so it’s easy to provide customers with the extra option.

Operators also have the choice of incorporating products like Meg-3 into their own creations. O’Connell says the advantage of baking with Meg-3 rather than purchasing a ready-made crust is that the operator controls the formulation. This ensures customers can enjoy the same great taste they’re used to, and the quality they’ve come to trust.

Ocean Nutrition could not reveal the cost of the powder and many factors would have to be considered before incorporating it into an existing menu. But the marketing potential is huge, said Leffler … it’s all about education.

With some basic information about the benefits of essential fatty acids and the Meg-3 symbol on the menu, health conscious Canadians are likely to grab right on to the idea of an Omega-3 fortified pizza. And hopefully, never let go.•