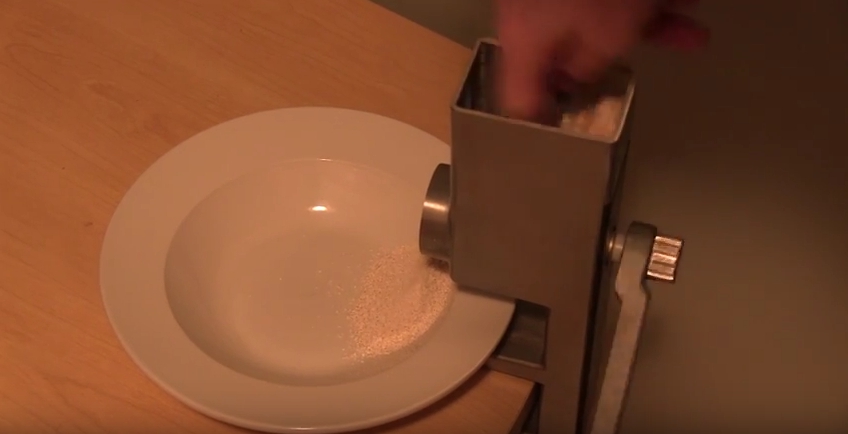 Halifax – Two students at Mount Saint Vincent University in Halifax have developed an allergen-free pizza flour that contains 25 per cent pulses and is scalable for commercial pizzerias.

Their innovation, dubbed “The Pulseible Pizza,” earned them third place in Pulse Canada’s Mission Impulse-ible competition for the Atlantic region in 2015, an event that challenges students to come up with an innovative use for pulses that helps make them more visible and accessible in the market.

The two are students in the applied human nutrition program at Mount Saint Vincent University, which is a four-year program designed to prepare students for careers in nutrition or dietetics by combining nutrition and basic food science with business courses.

Brown came up with the concept by posing the following question: “What if we made a pizza dough for commercial kitchens that would essentially meet their existing standards for preparation?”

“We wanted to incorporate the idea into something people are already eating a lot of and to create something that was allergen-free to meet Health Canada requirements and to fit as many applications as possible,” Brown said.

“Pizza consistently scores as one of the highest sensory scores of any food product anywhere,” Hamilton said.

The flour is designed specifically for commercial pizzerias and foodservice operations.

“That was the idea. How do we formulate a recipe that we can then standardize for pretty much any company that would want it and that would fit their existing operation so they wouldn’t need to retool, retrain, anything like that,” Hamilton said.

To ensure their product would be practical, they went straight to the pizza industry.

The pair developed their pulse pizza with the help of a local Pizza Delight where Hamilton had worked as a student, and Rugova’s Pizza, an independent business next door to Brown.

“Pizza Delight gave us the inside scoop on this is the amount of water we add, this is the mixing time we use in the mixer, this is how we roll out and how long we let it stand,” Hamilton said.

“Rugova’s did the toppings and baked the pizza for us,” Hamilton said. “We had to make sure the dough would hold up in the time and the temperature. We could test it at home but it wouldn’t get hot enough.”

Working with pizzerias was a great experience, Brown said. “They were curious to learn more about pulses.”

The students shared details about pulses and about how to select ingredients so you can remove all the allergens. “They didn’t offer pulse pizza, so they were really interested in that. They thought it would have value,” Brown said.

The competition, which took place in spring 2015, went smoothly.

“We had to present the product but also the business model: what would production look like, what would advertising look like as well as the nutritional characteristics,” Hamilton said.

“We made the doughs very early using our standardized formula, let them sit for the standardized amount of time. Then we went to Rugova’s, where they topped them, cooked them, boxed them, and we brought them to the competition that way,” he said.

“That was part of the process. We wanted to show that this is not a product available to the general public. But to meet that test, it actually had to work in a commercial kitchen.”

Although the developers set out to do something different, their overriding goal was to make their product look and taste the same as what pizza eaters are used to.

“If you go to any store or restaurant, when you order the healthier option, you don’t want it to look different, because healthier food generally isn’t tastier,” Hamilton said. “You see the different profiles in fat content, the carbohydrate content, the starch content and the protein content, across different pulse sources. So we wanted to go with something that looked as similar to a wheat-flour dough as we could as well as increasing the fat portion because that improves mouthfeel.”

But the biggest challenge was coming up with the dough – literally.

“We ended up using white bean flour. I just happened to have a grain mill,” Hamilton said. “We couldn’t find one anywhere in the city, so we had to grind it ourselves. It probably took us an hour and 45 minutes to grind enough for two pizza crusts.

“It was a process – definitely something you don’t want to do every day,” he said with a laugh. White bean flour is now commercially available, but it wasn’t readily available at the time, he added.

It turns out their pulse formula had a texture very similar to that of wheat flour – once cooked.

“Texture-wise, it was very similar. Taste-wise, it was decently similar,” Hamilton said. “It had a sweeter taste. Not sweet as in putting more sugar in your coffee, but sweet as in if you were to eat a sugar snap pea – that kind of sweetness.”

He said using raw pulse flours helped cut down on the “bean-y” flavour.

It took two months of trial and error to get there.

“We wanted to have it taste similar feel and similar flavour and 25 per cent turned out to be the number where people didn’t notice a difference,” Brown said. “We tried a lot of different ratios to get to that though.”

“In the finished product there wasn’t a texture difference, but it did have a different look and a different taste,” he said.

While working with the raw dough, however, the differences became clearer, Brown said. “When we worked with it, it was slightly more fragile,” he said.

They added guar gum to form a sticky dough and were able to use a large mixer to make the process more efficient.

“You have a similar texture but it’s not quite the same before it’s cooked, but after it’s cooked it the same consistency and mouthfeel,” he said.

The competition went smoothly and reaction to the pizza was positive.

“You could definitely tell there was something in it. The most telling reaction was that people in general said it tasted like a healthier crust but not in a bad way,” Hamilton said.

When told about the difference in the nutritional characteristics, including the increase in fibre and protein fractions in the dough, taste testers were enthusiastic.

Female tasters, in particular, were pleased to learn about the increase in protein, Hamilton said. “They were super excited!”

Rugova’s was impressed with the dough and willing to work with the students to develop it further as an allergen-free or gluten-free pizza crust option or just as a healthier pizza, he added.

“I think the most important thing for us was does the dough hold up over time?” Hamilton said. “Can you manipulate the dough and not have it crumble? Or it will be too chewy or too tough. He loved it. It cut the same. It handled the same way coming off the pans. It didn’t stick to the pans. We standardized everything: we used commercially bought pizza pans, we used the same amount of grease, the same type of grease on every pan that we did. We rolled out the dough and gave them the right rising time so that we could be sure it would meet all of the challenges of every commercial kitchen.”

Brown’s reaction to the crust seems to sum up the consensus that they achieved what they set out to do.

“One of my favourite pizzas would be one with garlic butter brushed on the crust,” he said. “When we made that pizza, honestly, I couldn’t tell there was a difference in the crust. I think that’s what we were aiming for.”

Bohdan Luhovyy, Hamilton and Brown’s supervising professor in the program, helped launch the Mission Impulse-ible Atlantic region competition. Luhovyy’s research has focused on the use of pulses in food preparation and he has taken on a role of promoting pulses in cooking.

This flour has both local and national market potential as it can be transported across the country, Luhovyy says.

Despite Canada’s position as a major pulse producer and exporter, and the fact that pulses are relatively cheap and dense in nutrition, “only 20 per cent of Canadians eat whole pulses regularly,” Luhovyy said. “Eighty per cent eat them on a very irregular basis. Only one per cent of yellow pea produced in Canada is consumed by Canadians.”

The students’ marketing package addressed the need for education. Their plan involved working one on one with companies to help them develop wording, design menu and train staff on how to promote the pizza to customers, Hamilton said.

Such initiatives as the Pulse Canada competition are a great way to promote nutrition and encourage students with innovative ideas who are eager to undertake food development and work with functional foods, Luhovyy said. They give students great experience analyzing the market, developing a product and carrying the concept through to food packaging, storage, distribution and shelf life.

The Global Pulse Confederation has declared 2016 the International Year of Pulses. Canada is the world’s largest producer and exporter of dry peas and lentils, shipping to more than 150 countries around the world each year, according to Pulse Canada. In 2014, Canadian pulse exports were valued at over $3 billion Canadian and pulses are the country’s fifth largest crop, after wheat, canola, corn and barley.

Hamilton and Brown will complete the four-year program in 2016. Meanwhile, with no facilities of their own and full course loads, they don’t have immediate plans to take their dough to market.

But further development of the formula is a definite possibility. Hamilton said completing this project and making connections in the business world makes it much more feasible to develop a pulse pizza dough for commercial sale.

“There is that R&D process you have to go through. We’d have to know the requirements for each pizzeria at the development stage, but you could do this with any type of dough recipe. With the smaller-scale restaurants, you could make them a standardized mix that is easily adaptable.”