No hustle in this concept 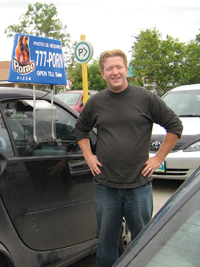 “The publicity has been insane,” he says,  “I’ve been on the BBC, the CBC, ABC, Showcase and Global. I have had requests for interviews from over two dozen radio stations, mostly in the United States but also from Germany and Israel. Our website received 15,000 hits in the first 24 hours, two-thirds of them from Germany.”

Wildeman is a 30-year-old manufacturers agent (by day) who had been delivering pizza in the evenings for the last couple of years to supplement his income.

“You know how you sit around in the evening between deliveries killing time by trying to come up with ideas to increase business,” he says. “It’s generally in fun but, when this idea came up, I didn’t see why it couldn’t work.”

Wildeman built a kitchen from scratch, a process that took about six months including passing the various licensing requirements. “In hindsight,” he says, “it would have been faster if I had just bought an
existing kitchen.”

He opened for business in late June (the week before the long weekend), with 12,000 flyers distributed to promote the business, and has been firing on all cylinders ever since.

His flyers advertise such double entendre combos as “The Missionary Position” (double pepperoni, double mushroom), “Mr. Big” (Meat Lovers), “Tossed Salad” (vegetarian) and “Climax” (loaded with all toppings), plus a few others with more suggestive names.

“It gets us a foot in the door,” he says. “But the pizza had better be good if people are going to reorder.”
To ensure the quality of the product, he has hired cooks with more than 10 years’ experience each.

“After three weeks, 30 per cent of our orders were re-orders,” he says. “We had one customer who reordered six times in the first three weeks. To date, we have had no complaints.”

He describes his customers as largely young urbanites who are looking for something new. And the majority of callers placing orders, he says, have been women – surprising given that the nude photos are of women.

Right now customers can’t pick which image they receive, but Wildeman would like to offer choices in the future. “It runs the full gamut. There are some that are very Playboyesque and others which Larry Flynt would blush at,” he told the Canadian Press, describing the photos sent out with orders. “Our drivers check for ID at the door,” he says.

Wildeman is already involved in discussions with potential franchisees in Saskatchewan, British Columbia and Quebec. He says that he has run into some legal issues in Calgary and Toronto but has lawyers working on the issues.

“Our franchising approach is different from most other pizza franchise operations,” Wildeman says.  “While we can provide a turnkey operation, we believe that what we are offering can be of equal benefit to pizza operations that have already started up that are going through that rough patch over the first couple of years trying to become established or smaller existing establishments. We provide the name, the imagery, the content and the marketing.”

Some people, however, are less than impressed with the gimmick.

Roz Prober, president of the Winnipeg chapter of child advocacy group Beyond Borders, told reporters the group believes the delivery service will end up exposing children to pornography.

Wildeman counters that pornography is easily available through plenty of other sources – including magazines, the Internet and television – that are easier to access.

And despite the contentious issue, Wildeman isn’t about to cover up his enthusiasm for the attention and success. The pizzeria owner says that his biggest problem right now is having enough staff to keep up with the demand.•