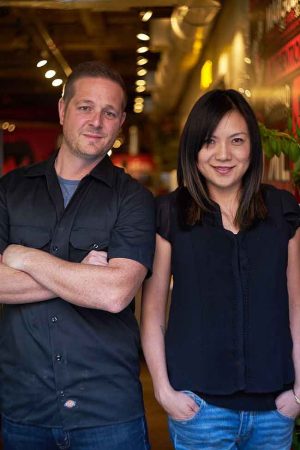 The Montreal couple have been passionate about Naples-style pizza since discovering it while travelling. But they got serious when they decided Montreal needed more of it. The determined pizzaiolos went to California to Peppe Miele’s Associazione Verace Pizza Napoletana in California to learn the art and science of making Neapolitan pizza.

After an intensive week of training, Yeh and Nadeau came back VPN-certified and fired up about making the thin-crust, easily digestible pizza.

They installed a custom-built wood-burning oven in their back yard to help them practise their newfound skills and make pizza for their friends and family, including their three children.

It was a marriage of another kind – Neapolitan pizza and fast-casual dining – that produced Brigade Pizzeria Napolitaine in August 2014.

“We saw this customized style of pizzeria in New York but thought there wasn’t anything like it here in Montreal,” Nadeau says. “We look around all the time, in LA, in New York. Sometimes we try 25 or 30 pizzas a week. And I have to say, what we’ve built is really unique. It has a look and feel you don’t see anywhere else.”

The fast-casual pizzeria serves personal 12-inch pizzas built to order by customers and baked in wood-burning ovens while they watch. “Brigadiers” hand-stretch dough, then let customers choose from more than 36 toppings as their pizza is cooked in front of them.

“People love to customize. They are excited to see pizzaiolos slapping the dough and amazed at how fast the pizza bakes,” Nadeau says, adding that it takes only 60 to 90 seconds for the pizzas to bake. Their target customers are 18 to 45 years old, many of them university students and young families.

The name Brigade was inspired by the now-legendary story of how the Naples style took hold internationally. While stationed in the Italian city during the Second World War, U.S. soldiers developed a taste for Neapolitan pizza and continued to seek it out in different Italian cities and in the United States when they returned.

“We liked the idea of people coming together, of food bridging worlds,” Yeh says.

MANAGING MILLENNIALS
Yeh, 39, and Nadeau, 38, split their duties. Nadeau, who is CEO, handles marketing, design, branding, supervises the pizzaiolos and dough slappers, including teaching them to train others on Neapolitan principles and technique. Yeh prepares recipes, maintains day-to-day operations and handles financial duties.

Yeh is a fashion designer by training and Nadeau a designer and multimedia artist. No strangers to entrepreneurship, the two also created Montreal based Yeh! frozen yogurt chain in 2008 that they successfully sold in December 2012.

They both work on developing their dough all the time and describe it as very different from other doughs. “We raise it rather than put it in the fridge for 48 hours,” Nadeau says. “We are always trying to improve. We change the dough, we change the temperature of the water. It’s a real passion. We really, really love it.”

They have about 20 employees, about half of whom work full time. Most are 18 to 25 years old and many are students from nearby McGill University. Brigade’s highly organized business model allows the restaurant to operate efficiently with as few as two staff on the floor, Nadeau says. During busy times, however, as many as nine may be working.

“It’s easy to get staff and hard to keep them,” he adds. How do they do it? With so many students on staff, they try to accommodate their schedules and be flexible with shifts. They also make sure to give workers positive and constructive feedback.

“Young people crave feedback. They want to be told they’re doing a good job,” Yeh says. “They also need structure. They like rules,” she says, adding that she and Nadeau have set up a deep-cleaning schedule and other checklists to guide staff in their work.

Their first oven’s entry into the kitchen is a chapter unto itself. “We had to hire an engineer to figure out how to get it in,” Nadeau says. They had to shore up the floor beneath to provide enough support for the heavy oven, Yeh explains.

The couple describe their pizzeria as an industrial open space that’s comfortable, casual and family friendly. “It’s like being in Naples. It’s a party atmosphere,” Yeh says.

“We wanted it to be more accessible, more democratic,” she adds.

They see their mid-range price point as an extension of this democracy. Many pizzas of this calibre sell for about $15, Nadeau says. Our custom-made pizzas are $8.95 and our signature pizzas are $13.95.

SOURCING INGREDIENTS
When it comes to ingredients, however, not all are created equal. They are big believers in searching out the freshest and most transparent. For example, when they couldn’t find the quantity of fresh basil they wanted from a local supplier, they went with an organic supplier, thus allowing them to satisfy customers seeking organic ingredients.

“For the tomatoes, we went with a company in Italy that grow their own tomatoes,” Nadeau says. “They can them, they label them, they package them . . . so they know exactly what is in there. We choose our provider specifically because they provide us with good quality tomatoes and we have a good relationship with them.”

Among their ingredients are meatballs made from scratch using pork, beef, and Parmesan cheese, free-range eggs, ricotta from Quebec and merguez, 100 per cent beef made locally.

They make all sauces in house. “We really believe it’s tastier,” Yeh says.

One of their ingredients is merguez sausage, a food often made with pork. They sourced an all-beef merguez because a lot of people in the city don’t eat pork, Yeh says.

Jean-Daniel Nadeau and Grace Yeh are the power couple behind Brigade Pizzeria Napolitaine.

NEAPOLITAN TRENDS
They have seen a definite rise in the popularity of Neapolitan pizza in recent years. “More people are claiming to have had it and more people are aware of it,” Yeh says. “People’s tastes are more sophisticated. And they want more artisanal toppings.”

Their most popular toppings are their hand-sliced prosciutto, wild cremini mushrooms, Italian sausage and arugula.

Of course, Neapolitan pizza is all about balance, Yeh says. Two to three toppings is the ideal. This creates balance in price as well, she adds. “We don’t put as much on each pizza, so they are not as expensive.”

Diners can also customize salads and their specialty, the panuozzo. Panuozzo is a sort of panini or sandwich they cook twice a day. The fillings are melted and the outside crispy. They used to make them using ciabatta but then began making them the more traditional way using their own pizza dough, Nadeau says.

“We can make a panuozzo with any toppings. We slice it open and fill it up with olive oil, basil, mozza fior di latte and warm it in the oven,” he says.

“It’s melted on the inside and crunchy on the outside,” Yeh chimes in enthusiastically.

DELIVERING OPTIONS
They started out with strictly counter service but recently have been bringing food to the tables. Customers enjoy having their food served at the table combined with the convenience of counter service, which includes quick settling of the bill, Yeh says.

Those who can’t get to the restaurant can have it delivered by a third-party delivery service. In the early days, they provided limited delivery by bicycle courier, but to reach more customers they use Foodora and Just Eat.

In keeping with their focus on customization, they plan to develop their own app. But for now it’s a good balance between convenience and reasonable cost. If it gets more expensive, they say they may have to rethink the model.

EXPANSION PLANS
They considered opening a second corporate store in Montreal. About a year and a half after opening, they decided to franchise. They worked on a manual, found an ideal franchisee in their current manager and hired a representative they felt understood their values. The goal is to get the right franchisee, Nadeau says.

Yeh and Nadeau will be in charge of supporting the franchise as well as doing research and development for the brand.