Maurizio’s Inc.: The fire within 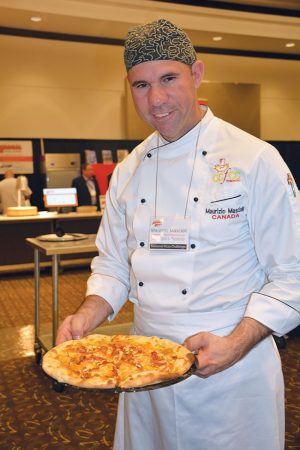 Maurizio Mascioli displays his Great Canadian Apple Cheddar Bacon Pizza, a tribute to Canada 150 that won the Seasonal Pizza Challenge at the Canadian Pizza Show in 2017.

The uniqueness of Maurizio Mascioli’s pizza has made his season-driven shop popular with locals and a must-do for visitors of Parry Sound, Ont., and surrounding area.

Cultivating exclusivity is one way an independent pizzeria can be successful in a competitive market, Mascioli tells me during a conversation that covers award-winning pizza, smart marketing and – intriguingly – firefighting. But let’s start at the beginning of his unique pizza journey.

Eight years ago, he moved from his hometown of Vaughan, Ont., more than two hours’ drive north to an area favoured by cottagers – a step that had nothing to do with pizza and everything to do with another passion. He loved his work as a volunteer firefighter and wanted to do it full time. Once settled in at the department, he decided to get into the restaurant business.

But Mascioli didn’t always specialize in pizza. Before opening Maurizio’s, the young entrepreneur sold sandwiches, pasta, calzones, fries and pastries at his shop in Parry Sound. As he puts it, the glamour faded: He didn’t have the traffic needed to sustain the business, and some ingredients were spoiling because he had to keep too many on hand to support the broad menu.

In 2013, he turned his focus to pizza. But he wanted to stand out from the crowd.

“I wanted to bring wholesome mom-and-pop service to a place not already inundated with fast food. I wanted to be the “pizza master of northern Ontario,” he says.

At Maurizio’s, they no longer serve sandwiches, fries, or calzones, unless it’s for a catering job booked in advance. All they do is make pizza, and by all accounts they do it well.

It was an Italian recipe from his mom, Sina Mascioli, who hails from Trapani in Sicily, that started the dough ball rolling.

Mascioli took classes at the School of Italian Pizza in Toronto, perfecting the treasured recipe along the way. But not everyone in Parry Sound was familiar with thin-crust Italian pizza. To get the word out, he ran a promotion through the local radio station and online. His “Perk at Work” invited businesses to get in on a draw to receive pizza and coffee delivered to their workplace by a radio station rep every Friday. It was a success.

“We did that all year long. We also did fundraisers and community work,” says Mascioli, who has three times won a chamber of commerce for his outstanding customer service.

Although Maurizio’s makes only pizza, it makes a wide variety of pies, all of which require hours of research and development and sometimes up to 30 versions before gracing the menu.

His best “high-calibre” pizzas are played up, priced at a premium and offered for a limited time. These include pizzas that won him accolades in the Canadian Culinary Federation (Toronto branch) competition and the International Pizza Championship in Bucharest, Romania, where last March he won the Gold Cup Master Chef and gold and silver medals.

Mascioli’s Great Canadian Apple Bacon Cheddar Pizza, which won the Seasonal Pizza Challenge at the Canadian Pizza Show in October 2017, is a go-to pie almost as popular on the menu as the perennial pepperoni. The veteran competitor shared insights on how he developed this culinary tribute to Canada 150, or the 150th anniversary of Confederation.

In particular, he wanted to make a pizza that was both sweet and savoury – not a dessert pizza: “So we thought, “What fruits go well together? What fruits will caramelize and not make the pizza too soggy? With a thin-crust pizza you can’t be soggy or it makes a mess in your oven.”

He also wanted to get more crunch than the bacon provided. Pecans fit the bill nicely.

The win seems fitting given that Maurizio’s is a seasonal operation. Parry Sound is a town of 6,000 people most of the year – and 140,000 in the summer months. To meet the high demand, the pizzeria operates full time five days a week starting in April and runs at full tilt from 12 to 8 p.m. (or later) from June to Thanksgiving. July and August, as you would expect, are its busiest months.

“We like to use high-quality, fresh ingredients all the time,” he says. “I can be open longer and more days [in the summer] and go through my ingredients faster so everyone gets the best possible ingredients all of the time. In the shoulder months, we like to do a skeleton week and our busiest days are Thursday, Friday and Saturday.” The slowdown gives the team a break and lets Mascioli compete in events and work on the business.

Staying open at least three days all year long lets them accommodate customers year round. “We don’t want to close but we don’t want to be open a full week and lose money, so we have to take the lesser of two evils,” he says.

During the peak summer rush, fans of Maurizio’s pizza sometimes have a long wait. A lot of people order on Thursday for a pickup on Friday to so as not to be disappointed, he says. On Fridays they are often booked solid by noon.

The 500-square-feet shop is “bursting at the seams,” Staff consists of Maurizio, Sina and two part-time employees. Sina assembles the pizzas. “She likes to put her touch on each one,” he says. Mascioli bakes, oversees staff and serves customers. “The final product always goes through my hands. It’s about accountability,” he says.

IN PERSON MEANS PERSONAL
Although the business could make more money doing delivery, Maurizio’s does not deliver. That is a deliberate choice, as is accepting only orders made in person or by phone.

“If we delivered, I would want to deliver every pizza in person – you know what I mean,” Mascioli says. He prefers to keep the personal touch by talking with customers and by making sure they have a pleasing experience. Chatting with the owner, watching the pizza being made and smelling the aromas are all important elements of that, he adds.

“We always open the pizza box in front of the customer,” he says. Part of this strategy is psychology, and part is to keep the business accountable.

“People see the pizza as it should look, smell,” he explains: “It’s about the aroma and the beauty of the pizza. It’s a five-second ritual that can eliminate disappointment – in case we miss something.” He invokes firefighting imagery: if you notice a problem at that point, “you’ve caught a fire before it happens.”

“Exceptional” is a key word found on his website to express the uniqueness of the pizzeria’s products and service. He encourages his staff to provide what he calls exceptional service by empowering them to go the extra mile to make a customer happy. He tells of a customer who spilled his pop on the way out the door. His employee didn’t miss a beat, going to the cooler to get him a new one. “I want that from my staff,” he says.

They will add a missing topping, bake the pizza again or – if the customer can’t wait – give them a free pop or gift card. That way, they leave on a neutral note and not a negative one. “You get a second chance,” he says. “It’s important that as a customer you leave happy.”

Masicioli also likes to reward the people who are already customers. One way he does this is through a one-day event when he fills a basket with gift cards for $5, 10, 20 50 and 100. Every customer gets to draw from the basket, everyone gets a prize and everyone makes a purchase. They use social media blasts to promote the event.

Maurizio Mascioli displays his Great Canadian Apple Cheddar Bacon Pizza, a tribute to Canada 150 that won the Seasonal Pizza Challenge at the Canadian Pizza Show in 2017.

As a volunteer firefighter, he is on call 24-7 and responds based on the severity of the call and also his availability. Having more than 30 firefighters on the force allows for that flexibility. At Maurizio’s, they need at least two staff on duty at all times, so he leaves the pizzeria only if there are enough staff on hand. For important calls, he closes the pizzeria, something he has done only three times.

Mascioli shares an unofficial firefighting creed that helped shape his business concept. “If you’re going to do something, ensure you do it exceptionally well, or don’t do it at all, because your life may depend on it,” he says earnestly.

“I’ve taken that idealism and I’ve brought it to my business. That’s one reason we only make pizza.”

The all-hands-on-deck attitude of volunteer departments has influenced his cross training of staff. “I give a lot of respect to the fire department and their structure. With a full-time [paid] fire department you have dedicated firefighters who do a certain function. They may do multiple functions, but typically you’re always looking to run a ladder truck, or you’re always on the hose line, or you’re on auto extrication or hazardous materials – that’s all you do, day in and day out, and you are the best of the best of that function.

“In a volunteer department, we don’t have the luxury of having 500 firefighters: we have 30. And we don’t know who’s going to arrive or who’s able to respond. So everybody knows everybody’s job.”

“I’ve taken that approach to my restaurant. Everyone knows the front end – how to assemble a pizza, how to stretch the dough, how to bake it, how to box it, how to greet the customer properly, how to take orders, how to modify orders.”

Another way he combines the two passions is by offering police, fire, emergency medical services, the military and other first responders a 15 per cent discount by simply being in uniform or showing their ID. “Whether you’re active or retired, it’s always in effect. It’s our way of saying thank you for what they do,” he says.

Topping the list of other people Mascioli wants to thank are his girlfriend, Sandra Porretta, and his parents, Sina and Lelio, who together provide a great support system and are part of this independent operator’s success. He encourages others to persevere and pursue their dreams.

“You have to educate yourself. Find the answers. Keep to your vision,” he says. “It will take you where you want to be.”