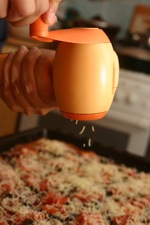 January 6, 2011, Dublin, Ireland – Food scientists at University College Dublin have created a processed cheese product with 60 per cent less sodium than full salt versions, and little difference in terms of taste and structure.

The research, published in the journal Food Research International, found that cheese made from dry protein ingredients (such as casein powder) was rated well by tasters who preferred the reduced salt versions to those with standard levels of sodium chloride.

“With so much processed food being consumed, western diets have about three times more sodium than is needed,” says Michael O’Sullivan, a scientist with the university’s Institute of Food and Health. “This excessive intake of sodium is linked to increased rates or hypertension and stroke. So in recent years there has been a move towards reducing sodium in processed foods, including cheese products.”

According to O’Sullivan, emulsifying salts, which include phosphates and citrates, and sodium chloride, are the main sources of added sodium content in processed cheese. By altering the manufacturing conditions, researchers were able to maintain the taste and structure of the imitation cheese while reducing the sodium content by up to 60 per cent.

These methods also reduced processing times and the amount of energy required for mixing and manufacturing. The post-manufacture hardness of the cheese also decreased due to slight changes in the way fat and moisture are distributed within the product.

Although the pilot-scale conditions the team employed to produce the imitation cheeses are not directly comparable to manufacturing conditions on an industrial scale, the team believes its methods could easily be scaled-up for industrial production.