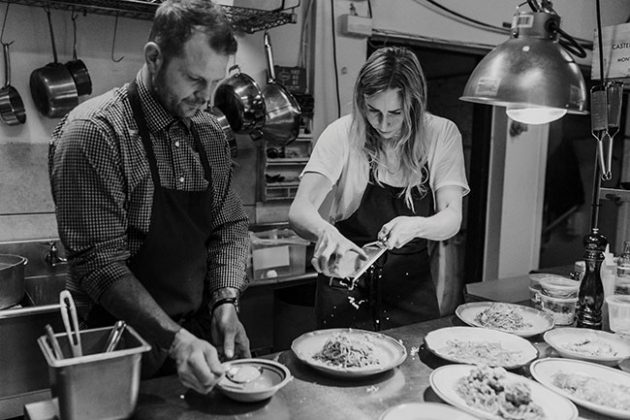 Since opening its doors in 2014, this pasta house has gained a loyal following in one of Canada’s fastest growing cities. Peters sat down with Canadian Pizza to talk about life as a restaurateur in Saskatoon, a youthful city often heralded as the “Paris of the Prairies.”

How did you meet?
We met in Vancouver, where he’s from. I’m from Saskatoon, but I moved to Vancouver because I wanted to learn how to cook in bigger, city restaurants. We both worked at Rob Feenie’s restaurant and became really good friends, travelled around cooking in San Francisco, Amsterdam and Spain, and then I convinced him to move back to Saskatoon with me and open a restaurant.

How has that experience of cooking around the world fed into Primal?
I like the food to be representative of the place we’re in and the ingredients that surround us. Saskatchewan is known as the bread basket of the world, producing much of the world’s grain, wheat and heritage grains, so we thought it would be the perfect place to have a pasta restaurant. We’re using what’s growing around us.

You already own The Hollows, a high-end restaurant that opened in 2011 serving seasonal dishes from locally sourced ingredients. What prompted you to open Primal in 2014?
We wanted to expand and we felt it was time to do a second restaurant. You learn so much with the first restaurant, so the second one can be that much more streamlined and done much more efficiently. We wanted to do something different from our first concept, which was five-course tasting menus, so we decided to shift the focus at Primal to Italian food done with Saskatchewan ingredients. We had so many pasta ideas that we needed to do a pasta space.

How does the use of Saskatchewan heritage grains feed into the taste of the pasta?
All of our pasta is made fresh, in house: we do handmade doughs and fresh pasta, and then we also have a pasta extruder that extrudes pasta. It just depends on the kind of grain you’re using. We use Red Fife wheat, which has more of a nutty flavour. And then we have our rye flour pasta that we do with braised, smoked beef tongue and housemade sauerkraut to complement the rye spaghetti; it’s a really big hit and has more of an earthy flavour. We use Saskatchewan-grown durum wheat in most of the other pastas.

I imagine you have strong connections with local farmers, based on your use of local grains. Can you tell me about that farm-to-table relationship?

We basically have a couple of farmers that we get whole grains from and then The Night Oven bakery in town has two stones to mill grain with, so they grind up the grains that we use for our pastas. Their mill is called Two Stones Mill.

Married chefs Christie Peters and Kyle Michael promote sustainability, environmentalism and handmade food through their restaurants, The Hollows and Primal.

Can you describe whole animal butchery and what it means for the dishes you create at Primal?
We only get in whole animals, so we do whole pigs, lamb, elk and cow. We butcher it down and use a lot of the prime cuts at The Hollows where we do the fine dining and then [at Primal] we use a lot of the braised bits in pasta fillings. We also make salumi for our housemade charcuterie. We use every single part of the animal; nothing goes to waste. It’s a really great way for us to use a little bit less meat because we can stretch it more in the pastas. Even the bones we make stock out of and then make that into au jus that we can toss with the noodles. Any unusable fat from the animals that we can’t use for cooking we turn into a liquid hand soap for the restaurant in an old pioneer way, using lye and essential oils. Any scraps from the plates or food waste created during prep is composted, so we’re a very low waste restaurant.

What’s your most popular dish at Primal?
I’d say it’s our beef heart bolognaise. We have our signature bolognaise sauce made with ground beef hearts – a cut of meat that wouldn’t normally be used as often – so it’s very sustainable and very nutrient-rich. When we slice our prosciutto we have some trim left over so we grind that into our bolognaise sauce as well, and any trim or ends left over from charcuterie boards and in-house salumi. We also grind vegetable stems that normally wouldn’t get used – so things like fennel stems, which give the bolognaise a really great fennel flavour.

What do you recommend all customers try at least once when they visit Primal?
Our fried bread. It’s a take on bannock, but it’s an Italian version. It’s basically like a fried pizza dough, but it’s a little round, fried bun. Customers just love it because it’s fresh-fried to order, so it puffs up and is just a really delicious bread that’s covered in corn meal and has a bit of roasted garlic and chilies inside and then we dip it in balsamic and olive oil.

What’s the next step for Primal?
Pizza is what we’re thinking. It would be something similar to our fried bread, but we’re still developing it. It’ll have to be good no matter what it is because we’re very picky about that. The pizza oven we’ve picked up is vintage. It’s very old, very used. It came out of an old hotel and we wanted to refurbish it. Part of our sustainability program is that we think they don’t build things like they used to, so we end up refurbishing a lot of the older equipment, saving it from the dump and making it new again. This oven’s an electric and gas combined; it’s very weird and probably dates back to the 1960s.

If you could sum up the restaurant scene in Saskatoon using three words, what would they be?
Community. Local. Young.