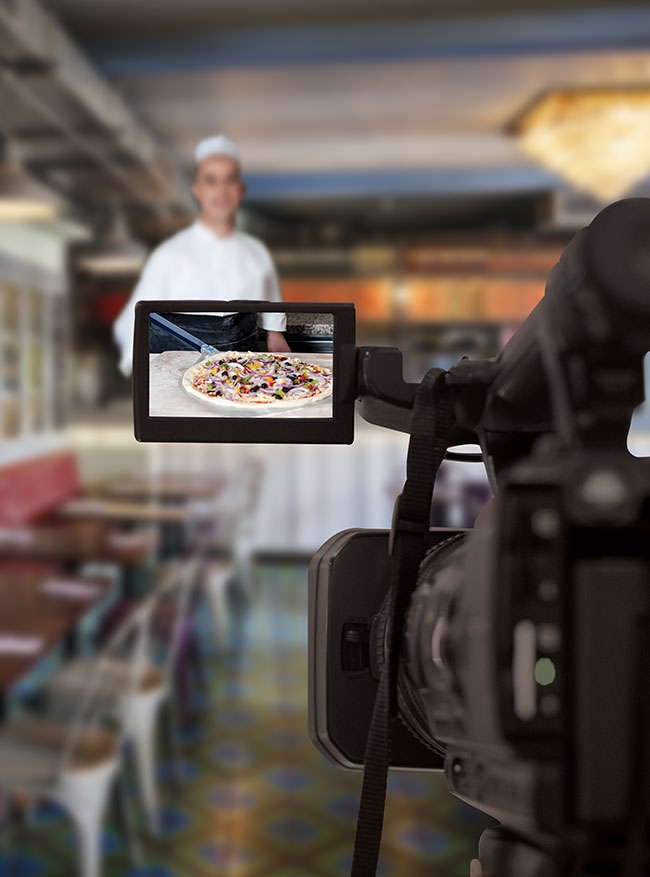 When you’re a small business, marketing can be the biggest challenge. There are a few old staples out there: the door-hangers and discount coupons. Maybe you’ve even stepped away from the oven for a moment and tried a little direct marketing or gotten creative with some pizza-box messaging. So what’s next in the constant battle to stand out in the crowd?

Consumer buying habits in the pizza business are a fickle thing. What’s hot and spicy one day, can be cold and old the next. But one thing is for sure, they’re evolving rapidly, and expanding your reach in the market requires some ingenuity and understanding of what influences the purchase.

A survey by the online marketing company MultiVisionDigital found that consumers are 64 per cent more likely to buy something after watching a video. The same study also suggests that videos have a four-year marketing lifespan – providing one of the best vehicles out there for sharing your brand message.

Watson, whose company has a number of restaurant installations, says the customer’s perception of wait times in the foodservice industry is far different from that in other services.

“That’s why a lot of restaurants write down the time you arrived – people tend to think ‘we’ve been waiting an hour’ when really it’s only been 15 to 20 minutes. It can be very easy to create a bad customer experience – but we want to take that and create a positive experience.”

The role video can play in that is by providing the customer something to focus on. Psychology already suggests video is processed by the brain 60,000 times faster than print. And it’s much better at seduction – convincing the viewer to make a buying decision. Reading is about thinking, whereas video is about feeling.

“Video, today, is really important. Everyone is so visual; and it’s the best way to evoke emotion. Without that emotion, you’re not reaching people,” says Cheryl Weedmark, a London-based video producer.

And she says the most effective video strategy goes beyond a single platform.

“A video needs to be searchable, and not just on a website,” she says. “It must be part of a bigger social media strategy – something you can build a campaign around.”

Most operations these days have dabbled in online promotion – either through a traditional social media platform like Facebook and Twitter, or through the more niche-driven Instagram and Pinterest. Our world is already connected and growing more so each day. In Canada, there are 28 million cellphone users, and one in five households use only cell service as the primary phone.

Nielsen, the folks that bring us TV ratings, reports that YouTube reaches more people in the 18 to 34 demographic than cable TV. Internet statistics continually support that it is also the second most used search engine after Google.

The big picture is we’re rapidly breaking away from traditional methods of obtaining information – and traditional ways of influencing a buying decision. And Canadians have the highest social media engagement level globally – 82 per cent have at least one active social media account.

As such, video allows you to connect with consumers on a far deeper level than traditional print marketing pieces. With effective storytelling and a human element, your customers will begin to see you as more than just an easy alternative to cooking at home.

The trick is to focus on what your customer cares about – and that may require you to accept that what you think they care about may, in fact, be wrong.

“The consumer has most of the influence these days,” Watson says. “That’s a complete reversal of 10 years ago.”

Testing is a vital part of the success in any visual campaign. Watson says it shouldn’t be done any differently from how a pizzeria tests new menu items.

“You might have five new pizzas that you think are amazing, but the customer may only agree with you on one of those. The market dictates what it likes, so always be testing. It definitely pays off.”

Tell the story
From a pizzeria perspective, Weedmark says video is an excellent way to extend the storytelling, by focusing not on the owner but rather on those key clients who will help connect people. “Think about that busy mom who comes in on a Friday, but she needs to have a gluten-free option, or a vegetarian option – or get out to the local farm to talk about the importance of fresh ingredients.”

Keeping up with food trends can be tough. Organic, local, artisan, gluten-free – there are as many new takes on what we put in our bodies as there are combinations for what we can put on our pies.

Storytelling is the key – and is what will provide more longevity to the marketing value of a well-made video. The extension to that is the concept of building a series, perhaps designed to be released over an extended period of time, with each new release adding to the previous story. For example, if the strategy is to highlight the value of the ingredients, the chain of videos can be layered much like preparing the pizza itself, building from the dough up.

Another huge trend, Weedmark says, is focusing on the heritage behind the family business – and in a pizzeria that could mean anything from talking about what makes “Grandma’s sauce recipe” so unique to the values of a multi-generational operation.

Content doesn’t necessarily have to be strictly focused on marketing, she adds. There’s a lot to be said for creating a story that people will see the value in – and that means going back to those emotional attachments. Sharing the customer experience, solving a problem, educating or merely showing appreciation will help trigger the human connection.

Going viral
Everyone wants the viral video, but when your traditional delivery area isn’t global, how will one million views benefit your core business?

“Video is getting a lot more accessible to people these days,” Weedmark says. “But don’t shortchange on the quality. There is a huge demand for good-quality video – not something filmed on someone’s smartphone. These days content is forever; and the average person doesn’t have time for poor quality.”

And while she says the best option – and not as expensive an option as people might think given the longevity of a good video campaign – is to use a production company. Weedmark doesn’t rule out the idea of self-producing. “Just use good equipment. With so much of it being available in high-definition, there shouldn’t be an excuse to use a cellphone. Even when you look at some of the best viral videos out there, you can tell there was some thought and quality put into them.”

The other hook – clean audio, she says. “Yes, you need the picture, but if people can’t hear it, they’re not going to pay any attention to it.”

“Dynamic media is much more engaging,” Watson says. “Can you imagine sitting there waiting and watching this steaming hot pizza coming out of the oven, the cheese bubbling . . . that imagery is far more engaging than looking at a poster.”

If you’ve spent any time trying to grasp the changing way technology affects today’s consumer, think of it this way – video traffic is predicted to count for almost 70 per cent of consumer Internet traffic by 2017. Do you have a plan to be a part of that?

What makes great videos?
London-based video producer Cheryl Weedmark says a video needs to be three things at all times:

“If you can do these three, you’ll have a great marketing tool for your business,” she says. “And if you can, try to narrow down your target to be as specific as possible. Speak to a specific demographic; don’t try to be everything to everyone.”

By the numbers
Here are some statistics that point to the growing power of video: