As Alberta’s economy booms, the pressures to keep staff in the foodservice industry also explode.

A bold, black sign stands on metal legs in front of a
small Calgary business that was forced to close its doors. The sign’s
neon letters were changed from “Help Wanted” to “No One Left to Hire.”
The grim icon represents Alberta’s labour market crisis. 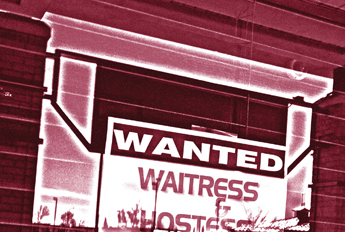 A bold, black sign stands on metal legs in front of a small Calgary business that was forced to close its doors. The sign’s neon letters were changed from “Help Wanted” to “No One Left to Hire.” The grim icon represents Alberta’s labour market crisis.

Lindy Rollingson, president and CEO of the Alberta Restaurant and Foodservices Association, calls the shortage of workers “critical.”

“The restaurant industry has been very hard hit,” she said.

A 2006 report by the Canadian Restaurant and Foodservices Association (CRFA), found the province has a current shortage of 13,000 employees in the foodservice industry alone. The severe demand is expected to grow by 33 per cent over the next 10 years.

The resulting fallout comes in the form of poor service, frustrated customers, lost business and reduction of an operator’s investment. In an effort to combat this, some pizzaiolos have looked long and hard about their kitchen environment, and what it is that really engages their staff.

“I try to make it as much fun as possible to work here and still get the work done,” said Wendy Radant, owner of Pizzaberg Café, in the town of Okotoks, just south of Calgary. “Hollering at students just isn’t effective.”

The crunch for Radant has come with wage increases, resulting from both an increase in the minimum wage and competition for workers. She pays almost double since acquiring Pizzaberg Café six years ago.

The combination of rising payroll and cheese costs, made it necessary for her to raise menu prices this year. Compromising food quality would never be an option Radant would consider as a way to counter rising costs of doing business here.

Restaurateurs have increased wages from 20 to 50 per cent within the past couple of years in an attempt to retain or attract staff. Employers are often forced to take what help they can get, when they get it, if they can get any at all. Employees carry exceptional clout, calling the shots on the hours and wages they’ll accept.

“You either agree with their rules or they’re gone,” said Stacey Polychronis of Plato’s Restaurant and Bar in Calgary.

“You know staff are helping themselves behind the bar – drinking on the job and ripping you off,” she said. “But, you can’t say anything or they leave you. The next one you get will likely be worse.”

The family business has been in operation for 27 years, and has never seen the labour market this bleak. “We were without a dishwasher for a long time this past summer,” Polychronis said. “When we did find one, he told us the terms he’d be willing to work by.”

“I try to make this a fun place to work,” Cory Medd said of his own challenges in maintaining staffing levels. The owner of Two Guys & A Pizza Place in Lethbridge added he’s thankful to have his business where there’s a large student population, and hasn’t been as dramatically impacted as his fellow pizzaiolos closer to the oil sands.

The Canadian Federation of Independent Business has found that more than 80 per cent of business owners in Alberta have experienced difficulties in hiring employees over the past three years. They also report that 65 per cent of the owners say they’re unable to pay higher salaries and benefits to attract workers.

However, workers who feel their contributions are appreciated and supported are likely to give back when it comes to loyalty. A pat on the back, a generous dose of respect and a good flow of humour can make all the difference to an employee who might otherwise walk across the street and get another job.

With many restaurant employees falling into the “Nexus” or “Y” generation (people born between 1975 and today) it can be beneficial to gain a little knowledge about them.

“It’s also important for organizations to understand what makes the Nexus generation tick,” said Dr. Linda Duxbury, a renowned authority on workplace and employment trends and a professor at Carleton University’s Sprott School of Business.

When employing someone from the Nexus generation, know that they seek variety, constant challenge, independence, and fun. And if an organization doesn’t deliver, this employee will walk, Duxbury warned.•