How the Montgomery Inn brings people together over bread 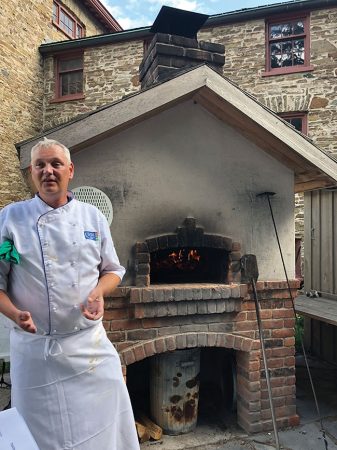 The wood-fired oven outside the Montgomery Inn Museum in Etobicoke, Ont., is a 19th-century tool used to teach 21st-century students.

As the oven is blazing, the students are learning to make a range of yeast-free artisanal loaves by hand. If it weren’t for the museum’s volunteers, and a traditionally trained chef’s know-how, this class on wood-baked bread would never have come to pass. This course on bread isn’t the Montgomery Inn’s only link between bringing people together over its kitchen: The people working behind the scenes have a way of not just making the past come to life, but also bringing education to future generations.

Chef Thorsen Pannek has more than 20 years of experience in baking traditional loaves using whole grains. He was trained in Hamburg, Germany, where as an apprentice he learned how to grind flour in a stone mill and bake bread using whole grains from local farmers.

Set up in the wood panelled kitchen, with students lined up along the length of the long pinewood table, “Chef Thor” is in his element, teaching today’s students the ancient craft of wood-baked bread.

Why teach in a working museum kitchen, and not at the well-equipped George Brown College? Pannek found a unique partnership that paired old with new. “I was actually interested in the wood-burning ovens themselves.” A friend of Pannek’s referred him to Montgomery Inn’s “INNovators” as the volunteers are called.

“So I went, and I met the co-ordinator,” recounts Pannek, “and there are really wonderful people here. They bake once a week for the farmer’s market, they sell bread and they take care of the oven.”

Montgomery Inn is a time capsule of early 19th-century Canada. It’s easy to see how its old-world charm won over the chef, with its meticulous attention to period details and a welcoming, warm environment. The proceeds from the bread sold at the farmer’s market supports activities like the Youth Food Project and the museum’s restoration and repairs.

“I did some training for the INNovators,” adds Pannek. “I’ve done one or two private workshops, basically, with some people that I knew, then I pitched the idea to my boss: It would be a great partnership to connect those two, to do off-site wood oven classes for George Brown College, because it’s very unique.”

The partnership fills a much-needed gap. The sourdough bread baking class is fitting for the period, and satisfies the current interest in working with natural and gluten-reduced breads. Lauren McCallum, the program director, is thrilled with the partnership. She feels it is in keeping with the tradition of the Montgomerys, who had a 400-acre farm as well as an inn during the 1800s. The nearly 180-year-old building has seen many iterations, first as a family farm turned rental farm, then an inn, later a church and finally, a museum.

McCallum recognizes how bread can be a bridge between communities and also served as a historical staple in colonial kitchens. What better way to teach people about culture or history than by breaking bread with them? She is particularly proud of a youth group initiative that introduced different cultures to each other through something nearly universal: Freshly baked bread.

“Breaking Bread was a partnership with the Toronto Ward Museum. It was an annual series that they run. And it’s usually a close, cultural perspective of one cuisine, with one culture, and they asked if they could do this with Montgomery Inn, with their culinary arts project,” explains McCallum.

“Because our youth are from various cultures, we didn’t feel that representing one type of food would cut it, and since we have bread as a theme throughout the inn, we knew that each could speak to the breads of their culture.” McCallum continues, “The youth were able to present their cultural stories and their breads, for this tasting,” says McCallum with a smile. “We’ve made those recipes over and over again, because those breads have become a new part of our history that we’re building.”

The Montgomery INNovators are putting the location to its best possible use. The building is still bringing communities together as it would have as an inn, breaking bread with Canadian newcomers and locals alike. An “Inn-ovative” approaching to learning, indeed.

PLAYING WITH FIRE: BAKING IN A WOOD-FIRED OVEN
Bakers are always concerned with keeping an eye on future trends while keeping traditions alive, and working with wood-fired ovens meets both concerns.

Chef Thor has found a way to highlight the old-fashioned world while keeping his students aware of future trends. With current baking movements veering towards whole-grain, wheat-free and yeast-free baking, traditional loaves have found a new market, and Pannek wants to share that knowledge with Canadian chefs.

Chef Thor hopes his students will learn an awareness of traditional methods from this class, specifically the skill of working with wood-fired ovens. He hopes they learn how to “deal with a wood-burning oven,” and how to control the fire and often-fluctuating temperatures.

“But also, how to match it with what you’re baking. We’re using a falling temperature, basically. We’re making a pizza, first, at a very high temperature, and then the wood gets swept out and we’ll make two or three products after that, that we match to the temperature.”

Chef Thor’s teaching assistant, Annie Boulanger (whose name, it must be noted, is French for “baker”) shares her tips for baking in a wood-fired oven.

Boulanger describes the logistics of baking in a wood-fired oven: The volunteers at Montgomery Inn began the fire in the outdoor brick oven at 8 a.m. By 10 a.m., they moved the fire to the front, and little by little they moved it to the back.

“It’s easier to work with the fire at the front,” explains Boulanger. “Fire is fed by oxygen, so it’s easier to get the fire going. Then, slowly, move the fire to the back to spread the embers, to make sure the oven floor is evenly heated.”

Annie adds that even an experienced chef can have difficulties measuring the temperature in a wood stove. Once the embers are swept from the oven floor, she doesn’t hesitate to use a 21st-century tool on the 19th-century-style oven. “I use my trusty infrared thermometer gun to gauge it.”

For those who do not have access to a high-tech thermometer, she does recommend that burgeoning chefs learn to use their senses. “Make sure the embers are spread evenly, so you won’t have a hot spot caused by a fire raging in a corner,” she admonishes. “An even temperature is key, it’s very important to get the embers spread evenly,” adds Chef Thor.

Boulanger says that even the most quick-handed chef can make a mistake when working with the often unpredictable quality of wood ovens. She recalls a time making pizza, when she burned it to a crisp within seconds. “I was standing right near the oven, and even as I was lifting the dough out, I heard it crackle.” Boulanger shakes her head at the memory. “That sound alone let me know I was too late.” She reminds her students that when it comes to fire, to remember “you’re not the boss. The oven is the boss. You need to think about all the variables, like the wind, the ambient temperature, and you deal with that. “It’s important that you’re flexible and you’re able to adapt to what the oven is doing.”

What most people who work with Boulanger don’t know is that she doesn’t have a modern oven range in her home. “All I have is a barbecue and a wood-fire oven,” she shares. “There’s always a way to transfer a recipe for an electric range to a wood-fire version, or to a barbecue.”

For those without a wood-fired oven, she recommends using something called a Tuscan Oven, which is a form of cast-iron pan that can be heated in an electric oven. Once it’s warm, it can be placed on the barbecue grill in a preheated barbecue.

What kinds of wood are best for baking in a wood-fired oven? Contrary to popular belief that a sweet-smelling fruitwood yields a fragrant bread, Boulanger recommends avoiding them. Instead, she recommends buying spare bits of hardwood lumber from a yard or using a hardware store that stocks hardwood like oak or maple to be sufficient.

“Save your peach wood or apple wood for meat, if you’re smoking something or roasting meat on a barbecue. For pizza or bread, it’s not going to impart enough flavour. Hardwood is just fine.”

Annie is a sympathetic teacher. She feels that the most important thing for someone to learn when baking in wood-fired oven is a zen approach to baking.

“Like a lot of things in life, you don’t get it right the first time. But it’s good not to get discouraged, and continue because baking with a wood oven is extremely rewarding,” she says with a smile. “Once you get a wonderful loaf of bread – whether it’s cooked in an oven or a wood-fire oven – it’s so wonderful. It’s real magic.”

Keeping culture alive” and “Playing with fire: Baking in a wood-fired oven” were originally published in our sister magazine Bakers Journal in October.