Joes Family Pizzeria & Poutinerie of Pembroke, Ont., reaches out to its community in creative ways and has a new pizza-kit venture to share 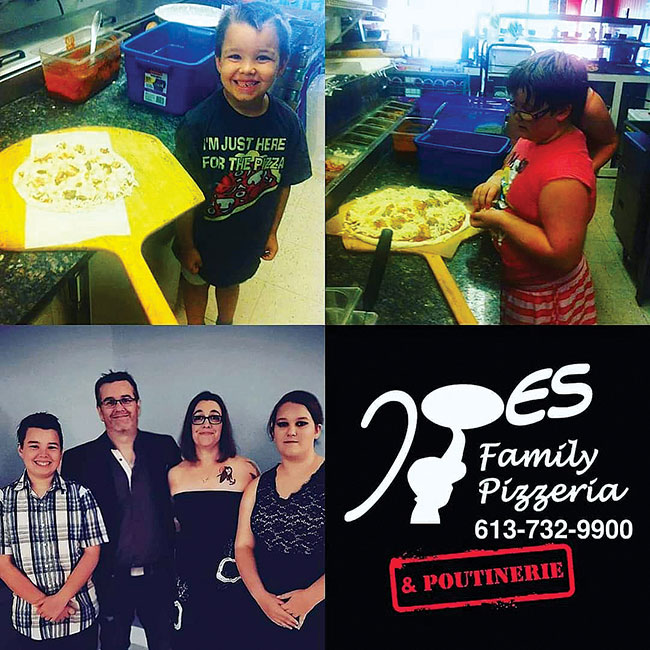 Joes is run by Joe and Natacha Ward and family. Their children all work or have at one time worked in the pizzeria. Photos courtesy Joes Family Pizzeria

After just over a decade in business, the runner-up in our Pizzeria of the Year competition is firmly embedded in its community of Pembroke, Ont., near Ottawa. Joes supports many local causes and activities, and now is reaching customers in their homes through its pizza kits sold in area grocery stores.

Joes is being recognized for its hyper-local community activities, which are not just part of the business’s marketing plan – they are its marketing plan.

“We give 100 per cent of our advertising budget back to our community through social media draws, charitable donations and cross-promotions with other business,” says Joe Ward, who with his wife Natacha owns the popular local pizzeria. “Seven per cent of gross sales goes directly back in to the community through charities and giveaways.”

In 11 years, they’ve never turned down a request from a charity, he says. “We always give something.”

Local partnerships
A former corporate store manager for two stores in a chain pizzeria, Joe appreciates the freedom he enjoys as an independent, including to buy locally and keep money in the community.

He and Natacha work with other local businesses to piggyback on one another’s events and radio ads. “We do a lot of cross-promoting. If you look down our well long enough you see we promote other businesses. I advertise even for other pizzerias,” he says. They buy as much produce locally as possible, including bison meat from a local farmer and sausage from a local butcher.

The couple have a combined 53 years in the pizza business, with Joe’s family going back five generations in Pembroke. Natacha, who hails from Stanstead, a town on the U.S./Canadian border, met Joe while visiting Pembroke.

During their first three years in business, Joe worked 11 a.m. to 10 p.m. seven days a week, and Natacha worked 4-7 shifts when she wasn’t on duty as a personal support worker.

Their children – Kayla, 26, Halle, 16, Joey, 14, and foster child Levi, 17 – all work or have at one time worked in the pizzeria. In fact, Kayla, Halle and Joey did a series of radio spots that got a lot of traction, promoting specials featuring their favourite foods and dishes with their names on them.

A savvy businessperson, Joe says that in the early days, the hardest part was getting people to try the pizza: “Every three months we would give away free pizza for a year and we would tell everybody to like us on Facebook,” he says. “Now we’ve pivoted. We still do that, but our main promotion now is every month we give away five $100 gift certificates. We randomly pick posts and commenters, and each one chosen wins $100.”

“If I retain that customer for a year, it’s worth it,” he says, estimating that the average customer is worth $1,200 to their business. And he doesn’t worry about giving away pizza because the pizzeria makes money when customers take them up on the free offer then add extra toppings.

“The biggest hurdle I find is just getting somebody to eat your food,” he says. “People’s habits are hard to break.”

Here is just a sampling of the pizzeria’s creative campaigns for getting pizza into stomachs:

#ItPaysToEatAtJoes: Joes draws a customer’s name every morning and the winner gets a gift certificate for the amount they spent the night before.

The spinning wheel: “We have a spinning wheel we lend out to other businesses for them to use during special events (and provide them thousands of coupons for free slices, poutines and pizzas for them to give away using the wheel).”

Freebie frenzies: sees them handing out free pizzas around town. “On Family Day the last few years we have gone to all the ice shacks on the Ottawa River and handed out free pizzas to families – also at our local skate park in summer and tobogganing hill in winter.”

Connecting with students: In 2020, when all four local high schools had to cancel their graduation and prom due to the pandemic, Joes gave every graduating student a free poutine.

Business-card coupons: They give out business-card-sized coupons at other local businesses, including restaurants. They did an Easter egg hunt at Value Village, hiding the small cards in displays and on shelves around the store.

Scavenger hunts: They sometimes post a selfie taken somewhere in town with their custom-branded truck, telling followers on social media, “Hey guys, if you recognize where we are, you’ll find a coupon here!”

Bartering: They love to barter with fellow businesses. “It’s just getting out there and talking.”

Joes is known for its 30-inch pizza challenge, which has been covered widely by newspapers, radio and TV. Customer teams of up to three people travel accept the challenge of eating a pizza the rough equivalent of six large pizzas with three toppings of their choice. That’s 18-20 pounds! The prize is a hefty $600 store credit. Three teams have successfully completed the challenge and their pictures hang on the wall. The last team to do it was a military group from the nearby 2 Signal Battalion, which pleases Joe, who himself was a “base brat.” 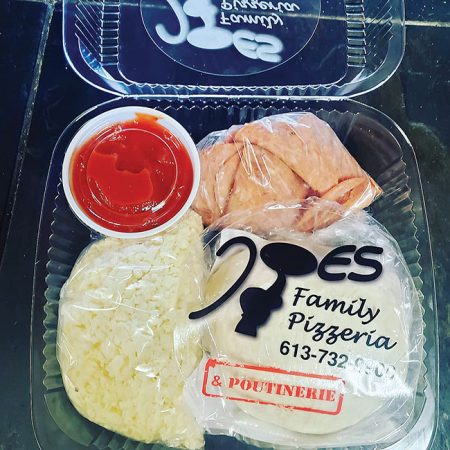 As of mid-May Joes pizza kits are available in 20 stores, and are expected to be in Ottawa by summer. Future plans include selling across Ontario and in Quebec. Photo courtesy Joes Family Pizzeria

Pizza-kit factory
Like many pizzerias, Joes started selling pizza kits early in 2020. They went over so well the Wards decided to try growing this part of the business. Joe reached out to a local independent grocer, Steven & Julie’s No Frills.

Joe Ward continues the story: “We started in January and worked exclusively with them for first three months. We slowly expanded to other smaller stores. . . . Arnprior took 120 kits the first day and ordered another 15 packs of 12. Soon we were selling 20 cases a week to each No Frills.”

It was time scale up. “We have leased a 4,000-square-foot warehouse to make a pizza-kit factory!” he says with excitement.

There’s a lot to this operation, including buying custom bags and stickers that won’t fall off in the freezer.

In Joes tradition, they put a coupon in every kit sold at No Frills. “People could win a free large pizza, poutine, slice or $5 gift certificate, and we have given prizes to people sharing their family’s creations.”

“We’re building a brand. That was the whole end game. I didn’t want to franchise. This is a little bit better. Eventually, the next step will be getting our pizza sauce private-labelled and get a co-packer.”

Scaling up has not been simple or easy. “There is a lag waiting to be paid. It’s tough to grow,” Joe says. In Joes’ case, they were able to grow gradually by selling privately to their local No Frills stores without “listing” (providing specific information and meeting certain requirements).

As of mid-May the kits were available in 20 stores, including small independents, in surrounding communities such as Deep River, Barry’s Bay and Renfrew and are expected to be in Ottawa by summer. By next year the couple hopes the kits will be available across Ontario and in Quebec.

They provide yet another way for area charities to make money: charity organizations sell them and get 20 per cent to keep for the charity.

Finally, we can’t talk about Joes without mentioning Big Joe Mufferaw, a.k.a. Joseph Montferrand, a French-Canadian logger, strongman and folk hero of the working man who worked in many small towns in the Ottawa Valley, and celebrated by folk singer Stompin’ Tom Connors. The Big Joe Mufferaw, featuring meatballs, bacon, diced dill pickles and old cheddar, is a bestseller on the pizzeria’s menu and the perfect symbol of Joes Family Pizzeria and its local pride.