Is speed of the essence?

Independent Canadian pizzeria operators finally have the
opportunity to best the big boys in the fight for fastest pies out the
door by utilizing new technology to see a 10-35 per cent reduction in
bake time, depending on the product, cutting off a minute and a half
from each pizza. 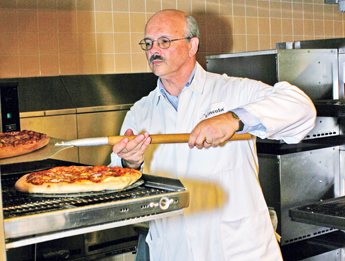 Independent Canadian pizzeria operators finally have the opportunity to best the big boys in the fight for fastest pies out the door by utilizing new technology to see a 10-35 per cent reduction in bake time, depending on the product, cutting off a minute and a half from each pizza.

Ben Gregory, product manager for Lincoln Ovens in Fort Wayne, Ind., says usually when this kind of new technology arrives in the pizza oven industry, the large chains have the power and financial backing to make the leap.

This time, he believes there’s a huge window of opportunity available in the Canadian market as the major players work through the process of corporate bureaucracy and decision-making.

“This could be a real competitive advantage for the Canadian independents,” Gregory said in explaining the latest “FastBake” technology from the company that specializes in forced hot-air conveyor cooking methods.

The newest oven – named the Low Profile with FastBake – brings a reduced bake time to pizzerias in a focused 32/40 format. The dual technology element is a combination of air impingement and infrared toasting.

As in the traditional impingement format, there are a series of “fingers” that deliver forced hot air to the pizza as it conveys through the baking path. The addition of the infrared technology brings a new element of high-level heat on top and bottom, to improve on browning and toasting of the products in less time.

“The advantage with the speed is that cutting bake times, while maintaining or even improving on the quality of the bake, means a decrease in the amount of time a customer has to wait, a faster turn to allow for more customers, and the opportunity to increase the number of pizzas a delivery person can take on a run,” Gregory said.

“And by removing that minute and a half of bake time, and operator can increase their capacity by 28 per cent.”

However, in the market where quality and taste are edging out speed and pricing, there are those who remain skeptical.

Roberto Vergalito, owner of Roberto’s Pizza in St. Catharines, Ont., operates both deck and conveyor type ovens. His belief is that they each have a place in the kitchen – but there’s still nothing that comes close to a stone-baked pie.

“Do you want to sacrifice quality for the time?” he questioned. “For taste, you just can’t beat a gas stone oven.”

Vergalito doesn’t see his offering as the fastest out the door, but rather the one with the best quality and taste. And with his customers seeking everything from gluten-free to whole wheat crusts, would there be a time savings if the oven had to be continually recalibrated for proper cooking temperatures?

“It totally depends on the dough, and even with a regular crust you still need 10 to 12 minutes to properly cook that pizza,” Vergalito said.

“You have to bake your best pizza every time. Increasing the capacity of finished product would be a huge benefit to creating more business & shortening the wait time,” Scott Gartly said. The owner of Belmont, Ont.’s A Guy, 4 Girls & A Pizza Factory, believes the conveyor ovens are easier to teach the inexperienced, young work force how to cook.

“The conveyor oven is great for creating a consistent product every time, once you have it set the way you need it to work. The pace of employees is maintained by the speed of the oven to some extent. If there is no backlog to cooking the pies, our whole operation pace would speed up.”

Gartly said in his pizzeria, they tend to “go like mad until the oven gets backed up. This puts our quoted pick up or delivery times further away.”

In advance of a major rollout, the engineers at Lincoln invited North American pizza expert Tom Lehmann to jump into the driver’s seat at the Fort Wayne test kitchen. And Lehmann, who made it quite clear he would not compromise on quality and consistency, put the designers through the wringer.

Lehmann also openly admitted he was skeptical of the marketing spin.

“We’ve seen the five-minute bake before,” he said pointedly. “And quite frankly, we’ve all heard how it just
doesn’t work.”

However, Lehmann clarified what he sees as the biggest issue with these kinds of technologies: no one seems to know how to calibrate the temperatures properly.

The oven designed by research engineers Mitch Henke and Carol Nealley is the product of two decades of working together. They’re both fiercely proud of the latest offering, and met Lehmann’s challenge and skepticism head on.

Lehmann pushed the pair through more than a dozen test pizzas before he claimed he was content they had the baking temperatures correct.

As each test pizza rolled, Lehmann literally and figuratively dissected it. He explained he was looking to see how the dough reacted, the condition of the gum line – if it existed at all – the reaction of the cheese and other toppings, and if they were properly cooked.

Of course, this again will boil down to the kind of dough being used, Lehmann stressed. Sheeted dough, as opposed to hand-tossed, has a thinner structure. The heat transfer through the dough to the sauce is faster, and that is dissipating as steam, which removes heat into the oven cavern away from the product. The end result is the toppings can’t get hot enough.

“FastBake has managed to solve that issue,” he said.

For Rick Swinemar the conveyors came after 12 years of deck ovens at his Big Red’s Family Restaurant in Western Shore, N.S.
“The only concern we had when we switched was if the bake would satisfy our existing customers. It was a big decision because the ovens were very expensive. We were dealing with Irving Propane so we got to know the salesman quite well. He arranged for us to go to Cape Breton to try out the oven with our product with one of his customers. We were very pleased with the outcome. We have bought 17 of these ovens over the 18 year period.”

Swinemar said he saw a number of benefits to using the conveyors, starting with the ease of use for the employee.

“If they make product right you will have a consistent bake every you get a pizza. Consistency. You can leave the store and feel confident things will go okay.”

Keith Toppazzini, co-CEO of Toppers Pizza, said they have seen a consistent improvement in the quality of their product since they made the move to Middleby-Marshall’s PS570-EMS, a gas-powered energy-saving oven. The move has allowed the 36-store company to improve their bake times to about six minutes, from a previous eight.

“If you’re only making one pizza per half-hour, the deck is perfect. But if you’re making 200-plus pizzas per half-hour, a conveyor is the only way to go. No matter how skilled you are at opening and closing the oven door, the temperature will still be reduced.”

Adding to that, he said the impingement finger configuration is also extremely important.

Is the technology one that carries weight in an industry looking to gain on its current status as “fast food” falls out of vogue?
Papa John’s, a U.S. pizza chain, believes so. They recently invested in Middleby’s equipment to the tune of some $20 million.

“This will put us in line to compete with other fast feeders like Wendy’s,” Tim O’Hern, senior vice-president of development at Papa John’s, told USA Today. “Ten minutes is about the time people spend waiting in line at the drive-through window.”•