The Canadian Pizza Show was innovation central, where the pizza industry gathered to eat, meet, mingle and learn for one exciting day 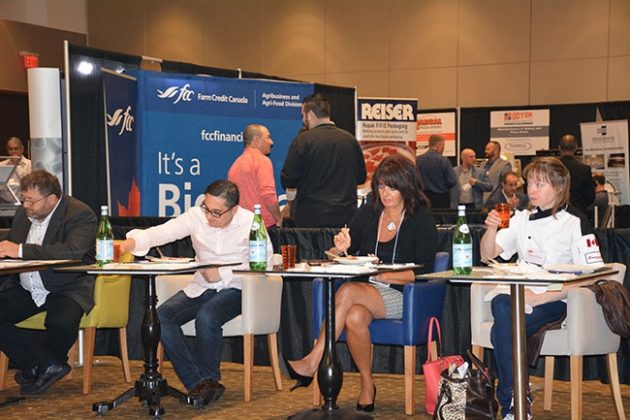 Judges Gabriele Paganelli of Paganelli Bar-Osteria and Speducci Mercato; Giorgio Taverniti of Frank’s Pizza House in Toronto; Marina Rondinelli, former owner of Rondo’s Bar & Eatery in Sarnia, Ont., Pizza Plus Corunna and Pizza Plus Petrolia; and Diana Cline of Diana’s Cucina and Lounge in Winnipeg had their work cut out for them.

Spicing up pizza toppings with ethnic influences was a noticeable trend from ingredient exhibitors at this year’s Canadian Pizza Show, but it was simplicity that won over the judges in the Canadian Pizza magazine Chef of the Year competition, which saw a repeat champion showcasing a very modern-world pie.

Some 40 pizzeria-focused exhibitors filled the fifth annual edition of the event held Monday, Oct. 17, at the International Centre in Mississauga, Ont. Sponsored by Saputo Foodservice, PizzaMaster (distributed by Alfa Food Service) and Stanislaus Food Products, the show offered plenty to see for the 250 attendees, including commercial ovens, heated delivery bags, flours, yeasts, flavourful toppings and a selection of business and financial services that included a mascot design company.

Heating up
On the equipment side, the S100E modular electric pizza ovens by Moretti Forni (distributed by Euro-Milan) and PizzaMaster 900 series were in operation for the daylong Pizza Chef of the Year competition, allowing pizzaiolos and visitors to experience the ovens in action. Also attracting attention was the compact TurboChef Fire ventless oven being shown by W.D. Colledge, which is designed to cook a 14-inch fresh dough pizza in 90 seconds.

Dough know-how
Speaking of dough, Ardent Mills was promoting its pizza flour and pizza mix solutions, while yeast suppliers Lallemand and Lesaffre were highlighting productivity improvers. Montreal-based Lallemand was promoting FlexFirm, a dry bakers yeast used in pizza dough to provide convenience and consistency in proofing while Lesaffre had many products on display, including its deactivated yeast that relaxes doughs to reduce tearing and shrinkage while moulding. Gluten-free manufacturer Canbrands Specialty Foods was showing its formed and vacuum-packaged par-baked pizza crusts, with a non-GMO version now available.

Say cheese
Saputo Foodservice revealed the company’s new look and highlighted its website recipe and  pairing articles, while Weins Foods of Montreal was featuring its soy-mozzarella pizza topping blend. Salerno, a Gay Lea brand, was showing its PizzaMate blocks and PizzaPro shredded blend, while Arla Foods was displaying its Tre Stella smoked cheeses, featuring a new smoked gorgonzola wheel. Parmalat hosted celebrity chef Massimo Capra, who was turning out pesto pizzas and highlighting Galbani mozzarella, a brand he grew up with in Italy.

Tasty toppers
remium tomato options were on display at the show. Stanislaus was sampling its selections, while Escalon, a KraftHeinz brand that has been in Canada for two years, was offering tastings and holding a draw for a pallet of product – close to 50 cases of tomatoes. Old California brand was featuring its shipping-friendly pouch packaging.

For shops looking to add a chicken alternative to the menu, Reuven was featuring its new Karaage Japanese-inspired breaded chicken bites, which are fully cooked and made with boneless leg meat.

Importer Finica Food Specialties was showing a variety of pizza-friendly ingredients, but eye-catching toppers included Sweety Drops, which are small, tear-shaped peppers originating from Peru that burst with a sweet, tangy flavour.

Business boosters
On the business service side, VisualTouch POS was demonstrating its integrated point of sale and digital signage solution. Now a change at the cash register will immediately be reflected on the menu board and vice versa.

Pizza prowess
The Canadian Pizza magazine Chef of the Year competition, sponsored by Saputo Foodservice, Moretti Forni, Escalon Premier Brands and Ardent Mills, was central to the show. This year a gluten-free pizza topped a strong and larger-than-ever field of talented pizza makers.

The top prize went to Carlo Raillo of Buco Pizzeria + Vino in St. Albert, Alta. A third-time champion, Raillo impressed judges with a gluten-free vegetarian pizza that paid tribute to a modern customer’s lifestyle. Rodolfo Santo of Mastro Roberto Trattoria & Pizzeria in Woodbridge, Ont., took second place with a classic pie that focused on its 90 per cent hydration crust made of organic flour, spelt, amaranth and rice flour. Raillo and Santo both won trips to compete at the International Pizza Challenge at Pizza Expo in Las Vegas in March.

Raillo, a veteran chef who took the title in 2013 and 2014, made a gluten-free, vegetarian pie he calls the Life Style using a gluten-free dough that included wheat starch, corn starch, buckwheat flour and rice starch. He topped the winning pizza with tricolour peppers, sautéed beets and goat cheese, among other items.

Raillo and Santo both win trips to compete at the International Pizza Challenge at Pizza Expo in Las Vegas in March.

Four Canadian pizza industry giants, including several award-winning chefs, took on the tough job of narrowing the field. Fortunately this year the competition recognized more winners than ever. Seven chefs received awards for their outstanding pizzas in a strong field of competitors.

Daniel Alay of Milano’s Pizza in Etobicoke, Ont., rounded out the top five with The Albanian featuring kalamata olives and goat cheese.