November 3, 2008 – When the tsunami hit his homeland in December of
2004, it pushed Senthil Kumaran Thirugnana to help those devastated.

When the tsunami hit his homeland in December of
2004, it pushed Senthil Kumaran Thirugnana to help those devastated by the tidal wave.
Since
the beginning of 2005, through various events he's organized,
Thirugnana, 41, has been able to raise $880,000, including $690,000 to
build Canada Tamil Village in north Sri Lanka which will have 250 homes
and is expected to house 1,500 refugees.
"Raising $880,000, just by myself, is not easy but people trust me because I'm very open about everything I do," he said.  Now he's opened a Pizza Depot in Mississauga, and a portion of the restaurant's profits will go towards various charities. 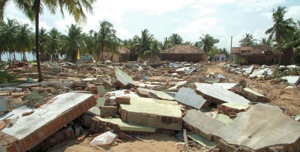 Thirugnana
immigrated to Canada from Sri Lanka in 1987 when he was in his early
20s. He lived in Mississauga and obtained an economics degree from York
University.
"After the tsunami hit, I saw how vulnerable people
were. They lost everything," said Thirugnana, who now lives in Oakville
with his wife


and two children.  He visited his native land in 2005
and saw first-hand the carnage caused by the monstrous wave, which left
more than 40,000 dead and a staggering 2.5 million people displaced.

In
early 2005, he held his first fundraising musical show, called
Nivaranam, and later that year another. Those shows raised about
$150,000 which went to the Tamils Rehabilitation Organization — Canada.
There have now been 10 of those events. Fifteen per cent of the
proceeds from the next Nivaranam, which means relief in Tamil, will go
towards the Ontario Schizophrenia Society.

Because he runs so many
of these events, Thirugnana has to regularly take time off his work as
an advertising consultant for a media company. With the pizza shop,
he's hoping to have a steady income while being able to have some time
to run his many fundraisers.

Why pizza? "We're in economic tough times but people will still eat pizza."
The
grand opening for the restaurant, located at 3945 Doug Leavens Blvd. in
Meadowvale, was this past Saturday, Nov. 1 at noon. The restaurant handed
out 200 medium pizzas for free. Check out his personal website at www.minnal.ca.