Features Business and Operations Trends
How did your pizzeria do in 2020? Survey says half of participants saw sales up or on par with 2019 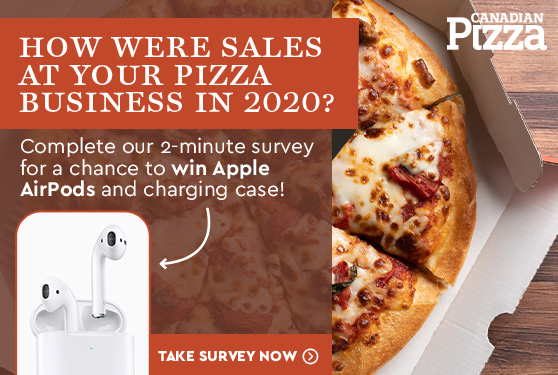 How were sales at your pizza business in 2020? Canadian Pizza magazine conducted a short national online survey to find out how pizzerias in Canada fared in 2020.

We entered participants in a draw for a chance to win a set of Apple AirPods.

Congratulations to Domenic Ruggiero of Dante’s Mobile Pizza in Grimsby, Ont., who won the AirPods!

Here is a sampling of the survey results:

To our question “How were sales at your pizzeria in 2020?” answers were mixed. More than 25 per cent reported sales decreasing by more than 10 per cent compared to 2019 sales.

Nearly as many pizzerias (21 per cent) reported sales increasing by more than 10 per cent.

For 15 per cent of participants sales increased slightly.

For 11 per cent sales decreased slightly.

The 12 per cent – seven pizzerias – who responded “Other” to this question told an interesting tale. Discouragingly, one business reported sales decreased by 45 per cent compared to 2019 and another reported sales were down by about 65 per cent. However, there was also good news: Five pizzerias opened in 2020. One response was encouraging for the future independents: “I opened on April 1 and our sales are increased up to 25% on top of the break-even point.”

Taken as a whole more than half of participants saw sales go up or stay on par with 2019 sales, an encouraging sign for this sector.

When asked “What was your biggest operational challenge in 2020?” 32 per cent reported finding and keeping competent, reliable staff as their biggest challenge. One quarter said managing the flow of orders from different sources (delivery/curbside pickup/walk-in traffic) was keeping them up at night. For almost 20 per cent, managing staff scheduling was a headache. Nine per cent found marketing and reaching new customers a major challenge.

As expected there were several responses outside of the choices given (14 per cent responded “Other”):

Learn more insights gleaned from the survey – including fellow operators’ delivery experiences and their plans for 2021 – in the next edition of Canadian Pizza.

Although the prize has already been awarded, our survey remains open. We encourage pizzerias to participate and have your say.

If you have questions about the survey, contact editor Colleen Cross at ccross@annexbusinessmedia.com.

2 Comments » for How did your pizzeria do in 2020? Survey says half of participants saw sales up or on par with 2019