How did your pizzeria do in 2020? Full survey results in 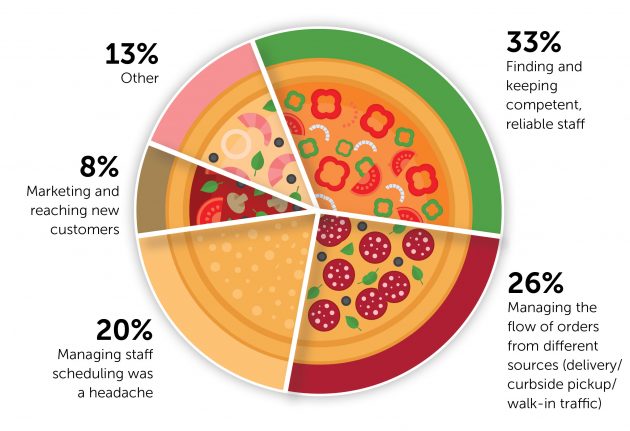 How were sales at your pizza business in 2020? Canadian Pizza magazine conducted a short national online survey in January to find out how pizzerias in Canada fared in 2020.

As a thank-you to participants, we entered them in a draw for a chance to win a set of Apple AirPods. Congratulations to Domenic Ruggiero of Dante’s Mobile Pizza in Grimsby, Ont., who won the AirPods!

To our question “How were sales at your pizzeria in 2020?” answers were mixed:

The 12 per cent – seven pizzerias – who responded “Other” to this question told an interesting tale. Discouragingly, one business reported sales decreased by 45 per cent compared to 2019 and another reported sales were down by about 65 per cent. However, there was also good news: five pizzerias told us they opened in 2020. One response was encouraging for the future independents: “I opened on April 1 and our sales are increased up to 25% on top of the break-even point.”

What was your biggest operational challenge in 2020?
One-third of pizzerias said that finding and keeping competent, reliable staff was their biggest operational challenge (see pie chart). One-quarter said managing the flow of orders from different sources (delivery/curbside pickup/walk-in traffic) was keeping them up at night. For almost 20 per cent of pizzerias, managing staff scheduling was a headache. Eight per cent found marketing and reaching new customers a major challenge.

As expected there were several responses outside of the choices given (13 per cent responded “Other”):

How would you describe your delivery capability?
Forty-two per cent of pizzerias described their delivery service as in-house only. Twenty-one per cent don’t deliver and an equal number use third-party service only. Others (14 per cent) offer both in-house delivery and service through a third-party company. One participant reported they launched delivery in January 2021. The result? “So far it’s not as popular, people still prefer to pick up.”

However, pizzeria operators had more – much more – to say. A quarter of participants answered “Other” to this question. Clearly, the range of choices we gave did not fully describe the experience many of you had. Here is a representative sampling of the comments:

What changes are you planning for 2021?
Looking ahead, more than 20 per cent planned to increase take-out/curbside/delivery capability. About the same percentage planned to add a new pizza style or major product category. A good number (18 per cent) see 2021 as a good time to renovate or upgrade current location.

A significant percentage of responding pizzerias (14 per cent) had more to say about making changes to their business. Some said multiple changes were in store and others said “none of the above” changes were planned. Some had “No major plans for 2021” other than to “stay afloat and carry on.” One forward-thinking operator planned to add virtual concepts to their kitchen. Another reported starting to sell frozen dough and pizza kits at a grocery store.

It’s clear from our poll that pizza businesses do not all fit into one mold. For every individual business there is an individual circumstance. It’s our goal to recognize and understand those differences, and to provide information and inspiration for all of our readers. Look for online and print coverage of issues uncovered in this national survey.

Related
How did your pizzeria do in 2020? Survey says half of participants saw sales up or on par with 2019
Survey says! Insights from our national survey of pizzeria operators
Meet our Pizzeria of the Year!
Delivery grew by 98% in Canada in 2020: NPD Group summarizes ordering trends
Editors’ Picks
Digital Edition