For many years, Ricco Foods’ Don Windsor has been quietly supporting causes and events that make his community a place to proudly call home – all the while embedding himself deeply in the pizza industry 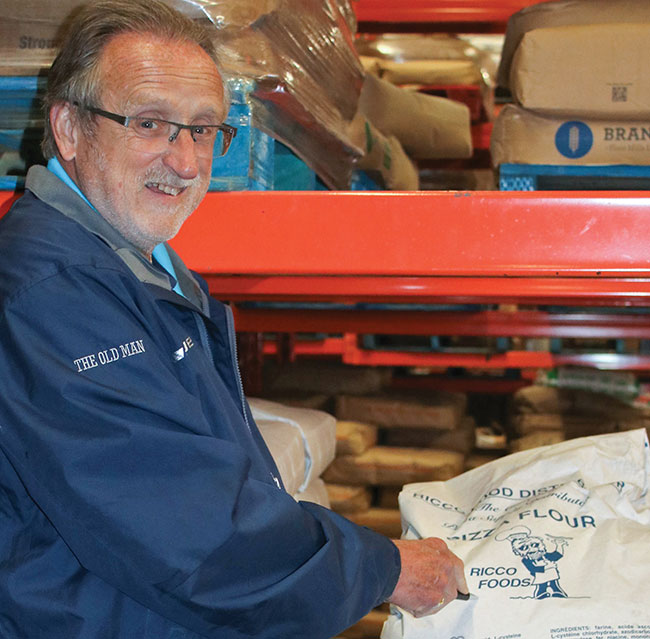 Like many in Strathroy, Ont., Don Windsor is looking ahead to the local Santa Claus parade.

“I hope we can have a parade this year,” says the president and owner of Ricco Foods Distributor in the rural municipality of about 20,000, just west of London. “It’s not for me to decide but I hope we can do it somehow,” he adds, referring to ongoing concerns about the pandemic.

The parade’s main sponsor since 2007, Windsor is especially hopeful the tradition can continue, with precautions in place, of course.

His philanthropy is well known in and out of the industry he has been embedded in for some three decades.

The company, which services accounts for independent shops and pizza chains, has grown dramatically since opening in London in 1990. That growth is all based on pizza, Windsor says.

Over the years Ricco has expanded distribution to full-service restaurants, grocery stores and commercial bakeries. The ratio is about 75 per cent pizza to 25 per cent grocery/bakery.

Its first location covered 1,800 square feet in south London. With the move in 1998 to nearby Strathroy – the centre of their trading area ¬– the company grew substantially to 10,000 square feet. Today the headquarters is 33,500 square feet. In 30 years, they’ve gone from one van to 13 trucks; from 100 products to more than 5,000 encompassing a wide range of pizza products and restaurant needs; and from two staff to 53 in 2020.

Ricco is both pizza-focused and family-focused. Son Don Jr. came on board as a truck driver in 1992, alongside Dave Leese and Billy Hannan. Don Jr. now handles all purchasing. Daughter Jennifer started working in the office in 1999 and now specializes in sales. Granddaughter Bailee works in inside sales and computers. “I also have a grandson who is coming up – Jaxon,” Windsor says. “He’ll join us, we hope.”

The company boasts many longtime employees and a key member of the team not always on site but no less vital. “I have an understanding wife, Sylvia,” Windsor says, referring to his 12-hour workdays.

Knowing Windsor has walked through the doors of many pizzerias, we asked him what he thinks the most successful businesses have in common. “I’ve seen a lot of three-generation pizzerias,” he reflects. “Hands-on operators who are the owners too – they have to have a passion for the business. They can’t accept it just as a job. We have other customers we’ve had for over 30 years. I appreciate all of them.”

Windsor has a philosophy: “One thing we do differently, if you’re a customer and you want Brand A sauce, we don’t wait for more customers to request it from our supplier. A lot of people forget about that word ‘service.’ ”

When asked for his help, Windsor believes in saying yes. “I try and support whoever I can. I don’t have a set amount of money, as long as the community has benefited from the support.”

When Strathroy Minor Soccer association wanted to build a new headquarters in 2008, he said yes. When the minor hockey association needed sponsorship, and a president, he said yes. And earlier this year, at the start of the COVID-19 lockdown, he said yes to essential workers. Ricco Foods teamed up with the local McDonald’s to donate more than 1,000 free meals to local grocery workers and truck drivers.

Windsor looks forward to sponsoring the next Special Olympics, in which his grandson Jaxon participates. “We’ll definitely sponsor that in Lambton where he lives and we’ll continue to sponsor many sports clubs,” the proud grandpa says.

Windsor has received much recognition for his work in the community, including the Strathroy Community Hero Award and a business excellence award from the Strathroy Chamber of Commerce. This summer he received the Medal of Distinction for the municipality, which recognizes individuals, groups and organizations “whose ongoing efforts have significantly contributed to the enhancement of the Strathroy-Caradoc community.”

Looking ahead and back

Ricco will keep up its community work and it will keep growing. The company, which was an advertiser in Canadian Pizza’s first issue 25 years ago, plans to add a new front office to the existing office next spring.

After more than three decades in this business, Windsor has good advice we all can heed: “Make sure you enjoy your job and love what you do. You spend more time at work than anywhere. This is my passion. I’m here every morning from 6 a.m. to 6 p.m., six days a week. I don’t know any better,” he says with a gentle chuckle.