Hobart to give away custom-designed mixer at Pizza Expo 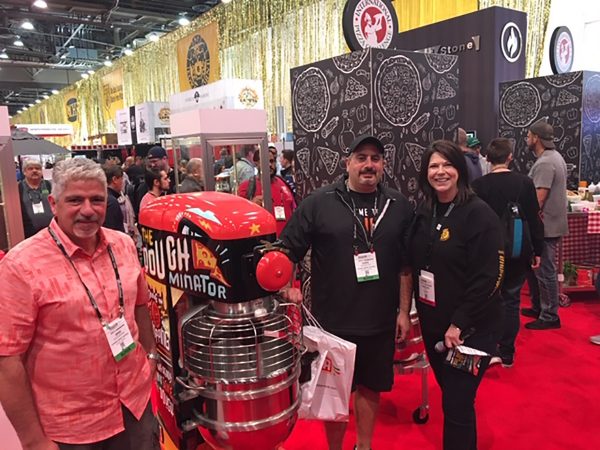 In 2019, Chris Koutsantonis of Olympia Greek Taverna in Kelowna, B.C., was the lucky winner of The Doughminator, a Legacy HL662 dough mixer made by Hobart. Photo courtesy of Hobart

Troy, OH – Commercial food equipment manufacturer Hobart is keeping up the tradition of giving away a custom-designed mixer at the International Pizza Expo in March.

During the show in Las Vegas, March 30 to April 2, Hobart will once again be giving away a custom-designed Legacy HL662 Pizza Mixer valued at $20,000 US.

This year’s custom design pays homage to the speed and power of the Legacy HL662 Pizza Mixer. The HL662 is a maximum heavy-duty 60-quart machine designed to deliver consistency for demanding dough production, Hobart said in a news release.  Hobart will unveil the one-of-a-kind mixer at booth 1845 on the first day of the expo.

In addition to a 2.7-horsepower motor and exclusive variable frequency drive technology that can handle the heaviest dough loads, the Legacy HL662 mixer features trademarked Shift-on-the-Fly and patented Soft Start technologies. Shift-on-the-Fly helps improve productivity by allowing speed changes during operation, while the Soft Start reduces the chance of product splash-out when the mixer is turned on. It slowly transitions to a higher speed.

Those interested in entering the giveaway can submit a completed sweepstakes entry card at the Hobart booth beginning at 10 a.m. on Tuesday, March 31. Cards are available at the booth and also in the gift bags provided when entering the show. The completed card must be submitted by 11 a.m. PST on Thursday, April 2, to be valid to win. Only one entry per attendee is allowed.

The winner will be randomly selected from the entries on Thursday, April 2, at approximately 12:30 p.m. PST at the Pizza Challenge Area #1 and the attendee must be present to win.