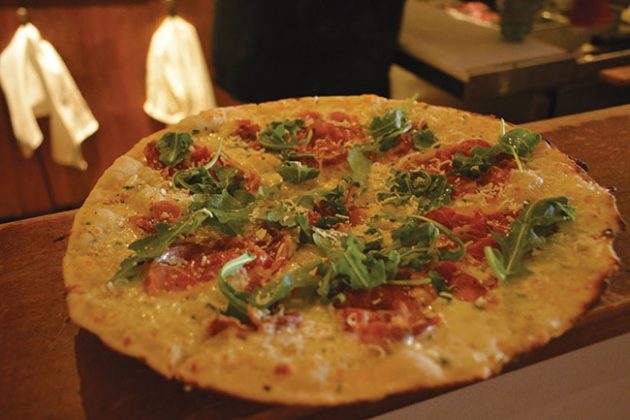 People looking for home-cooked Italian fare in Cambridge, Ont., can find the real deal tucked away in a plaza near the workaday industrial area of the city.

Amici Restaurant, as the name suggests, was conceived as a place for friends to meet.

Brothers and co-owners John and Mike Romanini came up with the idea to open a traditional Italian restaurant in July 2014 after finding nowhere in the area that seemed to offer the traditional Italian food they grew up with. They chose to locate in a plaza on Glamis Road anchored by DiPietro’s Meat and Groceries in a space where a nightclub formerly operated.

They swiftly made the space their own – part Italian restaurant, part sports bar – and put all the pieces in place to open just before Christmas that same year.

After four years in business, the brothers Romanini are enjoying the fruits of their labours, with both sales and staffing levels steady.

Seated in a cozy wooden booth next to the wood-fired oven, the brothers deadpan and joke with each other during our interview. But make no mistake, they are serious about good food.

Growing up in a household where their mother rolled pasta dough by hand every day gave them a taste for authentic food that, at times, spoiled them for eating out.

“When I grew up and started eating out, I often ordered steak at Italian places because the pasta and pizza was just not the same,” John says.

The brothers hail from near Ferrara, a city in the Emilia-Romagna region of Northern Italy. Living about 50 kilometres northeast of Bologna and about 140 kilometres east of Parma, the family had easy access to local specialties, Bolognese sauce and Parma ham. Amici features the food of this region as well as Tuscany. Their pizzas, for example, have a Tuscan base, extra-thin crust and fresh ingredients.

“We don’t do designer food. We do rustic, authentic. We make everything from scratch,” Mike says. “If you don’t like what you’re doing, you’ll never be good at it.”

The nearly 2,500-square-foot restaurant seats 75 and serves dinner from mid-afternoon to late in the evening. .

At the heart of it all is a wood-fired oven that provides both physical warmth and a visual focal point, with customers – especially kids – flocking to the oven to watch John bake.

The oven, their pride and joy, almost literally burst on to the scene through the floor-to-ceiling front window, which had to be removed to bring in the 3,500-pound edifice on a lift cart borrowed from DiPietro’s. The oven, shipped from Italy, has a 48-inch-diameter cooking area and cost them about $18,000.

“City Hall had no concept of the oven,” Mike says, adding that, after close consultation with the operators, city officials decided to label it a wood-burning stove.

Once the oven was in place, it had to undergo a complex seasoning process.

According to Mike, John is the pizza master of the two. John is modest about his skills but keen to talk about what it takes to bake in the versatile oven.

Learning to rotate the pizzas is the hardest part, he says. “You have to figure out when to put the wood in and when to spin the pizzas,” he says. The secret is knowing where your hot spots are, says John, who typically bakes at temperatures between 750 and 850 F.

The original plan was for him to work at the front of the house. But he was needed on the pizza oven, which is the last thing to be shut down each evening.

FINDING GOOD HELP
The brothers are happy with the staffing situation. Things have been stable, they say, knocking on the wooden booth for good measure. Two full-time servers – Amanda Yetman and Jessica Gowlett – have been with the business for about three years.

“It’s tough to staff a kitchen,” Mike says. They appreciate their employees and feel especially fortunate to have recently found a great worker in Alex Fauteux, who started as a chef in October.

“Having Alex on board in the kitchen has cut our workload in half,” Mike says. “One person can make a big difference. It’s nice to have the prep work done going into the shift.”

They believe in paying their employees well, and although Fauteux works slightly fewer hours than at his previous job, his employers know he values the skills training. “It’s a good tradeoff for him,” Mike says.

“Everyone wants to do designer foods,” Mike says. “Now we have someone who knows how to work. You have to have that Teflon personality to last in the restaurant business.”

FAVOURED DISHES
Amici’s motto is “Fresh food made with love.” The brothers grew up with family cooking and wanted to offer that to others. They knew they’d passed a stringent test of authenticity when their mother, Egle, took food from the restaurant home to their father, Witter, without telling him it wasn’t her own homemade. He enjoyed the food and didn’t point out any differences, they said – the highest compliment they could have asked for.

Other dishes they are often complimented on include osso buco, tiramisu and their mussels, which they buy at the best quality they can. Monday’s special is all-you-can-eat mussels.

John’s signature dish is a grilled Caesar salad made with bacon they cure themselves. “It’s romaine lettuce brushed with extra-virgin olive oil and grilled, served with our home-cured bacon, our signature dressing and topped with fresh shaved Parmigiano Reggiano,” he says. “A lot of people don’t expect lettuce to be grilled.”

In order to cater to requests for vegetarian food, they developed create-your-own menus for pizza and pasta (spaghetti, fettuccini, linguini and penne). “It’s a blank canvas,” John says.

To guide customers on combinations, they came up with several signature dishes, including seven traditional pizzas. “It’s all about educating people,” Mike says.

There is such a thing as being too adventurous. They draw the line at combinations they know will not work well together. For example, John says, if you add bacon or chorizo sausage it can mask the taste of the fish.

But Mike is the one known to put his foot down on weird combinations – customers know this and deliberately tease him by making unusual requests.

RECREATION HUB
Although the restaurant’s vibe is decidedly laid back, they keep up a hectic pace. Fridays and Saturdays are the busiest. On Friday, for example, they prep all day for that night’s crowd.

Customers of all ages visit Amici, but the partners are making a special effort to appeal to those 35 to 60 years old.

The restaurant is a destination for date nights, to watch sports on TV and to play in a darts league they run in co-operation with other pubs in the area. “Dart league has doubled our Mondays,” John says. Another entertainment draw is the slate of live bands they host, one every two weeks.

Ultimately, though, it’s consistently good food that attracts return customers who, when picking up pizzas often peek inside the box and end up eating the pizza on the spot. Says Mike, “If I had a dime for every empty box, I’d be rich.”