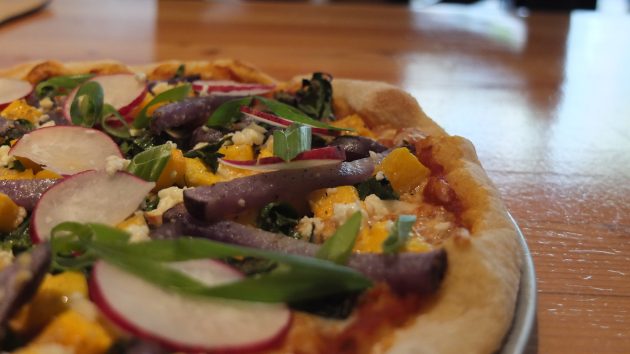 Rocky Mountain Flatbread is doing so much for its Vancouver community we could barely keep up. Owners and staff at the health-forward business have spent the pandemic thinking hard about people adversely affected by the pandemic and coming up with creative ways to help.

It started as a small business focused on healthy food and local produce that grew gradually. Suzanne and Dominic Fielden opened their first restaurant in Canmore, Alta., in May 2003. They now operate six locations in British Columbia and Alberta.

“During these uncertain and turbulent times the Rocky Mountain Flatbread put their heads together to ask the question “How we can best serve our community?” their website reads.

Some of their great ideas are feeding families in need by giving customers an option to donate a meal, a $2 food bank donation added for each online order, family value offers and take-home pizza kits, and a partnership with Feed the Front Line Canada aimed at supporting health-care workers. At last count, they created 335 pizzas for these essential workers.

But they didn’t stop there – they moved to help people who may not be first in everyone’s thoughts. They reached out to Mom2Mom, a community-based group that supports low-income mothers. “We were thinking of single moms who may feel especially isolated, many of whom have compromised immune systems,” Fielden said.

Mom2Mom thanked the business on Facebook: “Last week, our volunteers helped deliver 150 plus meals to Mom2Mom families. This wouldn’t have been possible without the support of Rocky Mountain Flatbread, who generously donated the food. Their ‘donate a meal’ program has helped feed low-income families for the past two months, and we plan to continue our partnership in July. Thank you to everyone who helped make this happen!”

They thought of the restaurant industry hard hit by pandemic restrictions, creating ready-made meals to go to hospitality workers. “We have joined forces with the folk at Say Mercy providing $5 to $10 ‘Staff Meals’ for people in the hospitality industry who are out of work and for ANYONE in need,” they announced on social media.

Necessity is the mother of invention and like so many restaurants, they’ve had to think on their feet, creating an online ordering system from scratch and encouraging customers to use it by donating $2 for each order and donating that money to the Vancouver Food Bank that many people are relying on these days.

Staff came up with an idea to create affordable, ready-made take-out meals such as Ajith’s Butter Chicken and Veggie Coconut Curry.

Thinking of overworked parents juggling kids and work, they offered a Mother’s Day special: a $45 family pizza kit with four regular doughs, tomato sauce, mozzarella, four toppings and four housemade brownies. They posted a video of staff showing how to make the pizza using the kit. And they reminded people they could donate a meal to a single mom in Vancouver.

They also work with Feed the Front Line, a campaign started by Christoph Barrow and Michael Tran, who run local restaurant Pacific Poke, and Andrea Ng at Glo Media “to rally around the tireless ICU and emergency staff who put themselves at risk daily during this COVID-19 crisis.” On Sundays, Rocky Mountain Flatbread donates $8 to the cause for every meal purchased.

“In addition, we have an offer of 25 per cent off to anyone who is a frontline worker,” Suzanne Fielden said.

EarthBites is a program near and dear to her heart and the business’s commitment to sustainability. They offer online lessons to schools, teaching students about transplanting plants. The kids get plants started, then drop them off to be planted in the garden. In a neat twist, parents and teachers are coming in to tend the garden – while following social distancing guidelines, of course.

“It’s connecting them in a safe way. No more 10 people at a time are allowed in the garden area,” Fielden said. “I never expected that. We wanted something more than video as a way to teach kids.”

As an example of their creativity: they have put a twist on their trademark pizza-making parties – normally held at Kitsilano and Main Street locations. They now sell the kits to go. They delivered 118 kits to one organization, which hosted a Zoom catch-up meeting for with participants all making pizzas. “That’s what we’re known for.”

The business its share of concerns. They are primarily a sit-down restaurant for whom only about 10 per cent of their business was previously takeout and delivery – and during the height of the pandemic increased to about 30 per cent. They were forced to temporarily close three locations and cut salaries by 25 per cent. Perhaps most painfully, their community events income disappeared. But the Fieldens and their team are choosing to see the positive side of things.

As Suzanne Fielden put it in her understated way, “We want feel that at least we’ve done the best we can.”

Update: Rocky Mountain Flatbread’s Kitsilano, Main Street Vancouver and Canmore locations are now open for dine-in and take-out service. Their dining rooms with open garage doors and patios have been redesigned for social distancing and accept tables of up to six people. Canmore and Banff locations have reopened and Calgary is set to open on June 22.