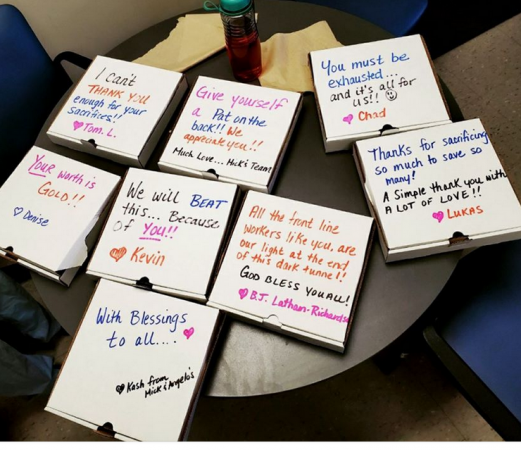 When the pandemic hit, Johnny Rocco’s, which has two locations in Niagara Falls and nearby St. Catharines, focused on making family meals to go, pizza kits for kids with instructions, lasagna and cannoli kits, and selling product wholesale directly to customers.

“In April we decided that since the frontline workers were working hard, we’d support them,” Visca said.

“Over the five days we made 3,500 to 4,000 nine- to 10-inch pizzas,” he said. “We asked all of our guests if they wanted to write a message to the workers. Messages such as “My hero wears scrubs” and “I can’t thank you enough for your sacrifices” were written on the pizza boxes. 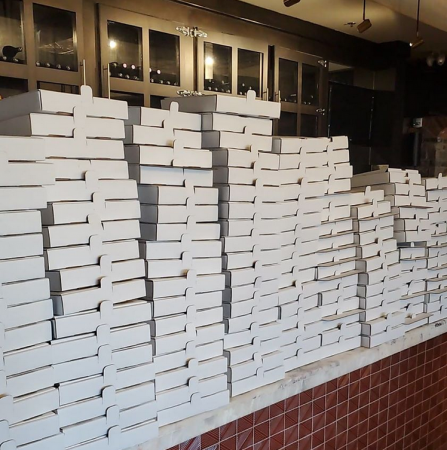 “Staff were very appreciative of the hot food. Other restaurants brought food as well. We were making pizzas on the spot. Every hospital department would send one or two people down. They’d pull up with wheelchairs and carts to pick up their pizzas – sometimes as many as 50 at a time.”

The team served lunch and supper shifts but sometimes lunch would stretch out, he said. “We’d keep going. We’d regroup.”

They were working on adrenalin. “My brother and business partner were on site. They would call me and say, “You’ve got to bring us more dough!”

“We’d feed all staff, including technicians and janitorial staff – not just doctors and nurses. They loved it. We heard from them for weeks afterward. They really liked having a pizza custom made.

“We brought a smile to their faces. If we had to do more work, it was all worth it.”

Some suppliers sent donations of cash or product. Lactalis Canada’s Galbani Professionale line, for whom Johnny Rocco’s is an ambassador, was one such supplier.

“We want to do our part to help so we donated Galbani Professionale cheeses and Lactantia chocolate milk bottles to help them feed our health-care heroes,” the company said in a news release.

During the pandemic, the restaurant’s two locations, which have large dining rooms, were hit hard by the shutdown. They closed their doors but kept delivery and takeout going. Now they are doing extended hours with the ability to seat on the patio.

Visca took a moment to tell us a bit about their COVID-19 experience. They’ve been working eight-hour shifts – shorter shifts than the typically 12-hour shifts they were pulling before the pandemic.

“It’s funny, I was telling my friends that mentally it was more exhausting to try to keep ahead and think about our next steps,” Visca said.

Some employees are coming back but finding good staff is still a challenge. In one sense, that task is a little easier by the shutdown. “In Niagara, a region with many hospitality businesses, normally to try to get a cook is nearly impossible,” he said. “This year at least we have a bigger pool to choose from.”

“For all of our properties we started about a month ago telling staff they’d need to wear gloves and masks and holding training meetings. Even if some measures aren’t mandatory, such as temperature checks, we’re doing them. We can’t afford another shutdown.”

“When we’re able to open up inside, our restaurants are all ready. We’ve installed glass in between the booths, taken out tables and limited our capacity.” They are taking another time-consuming but important step to assist with contact tracing if needed. The team is taking down guest names and contact information – from guests willing to share it.

“The extra measures are important in themselves but also for optics,” Visca said. “I’ve had people say, we’ve been watching your staff and their doing everything right. They appreciate the effort.”