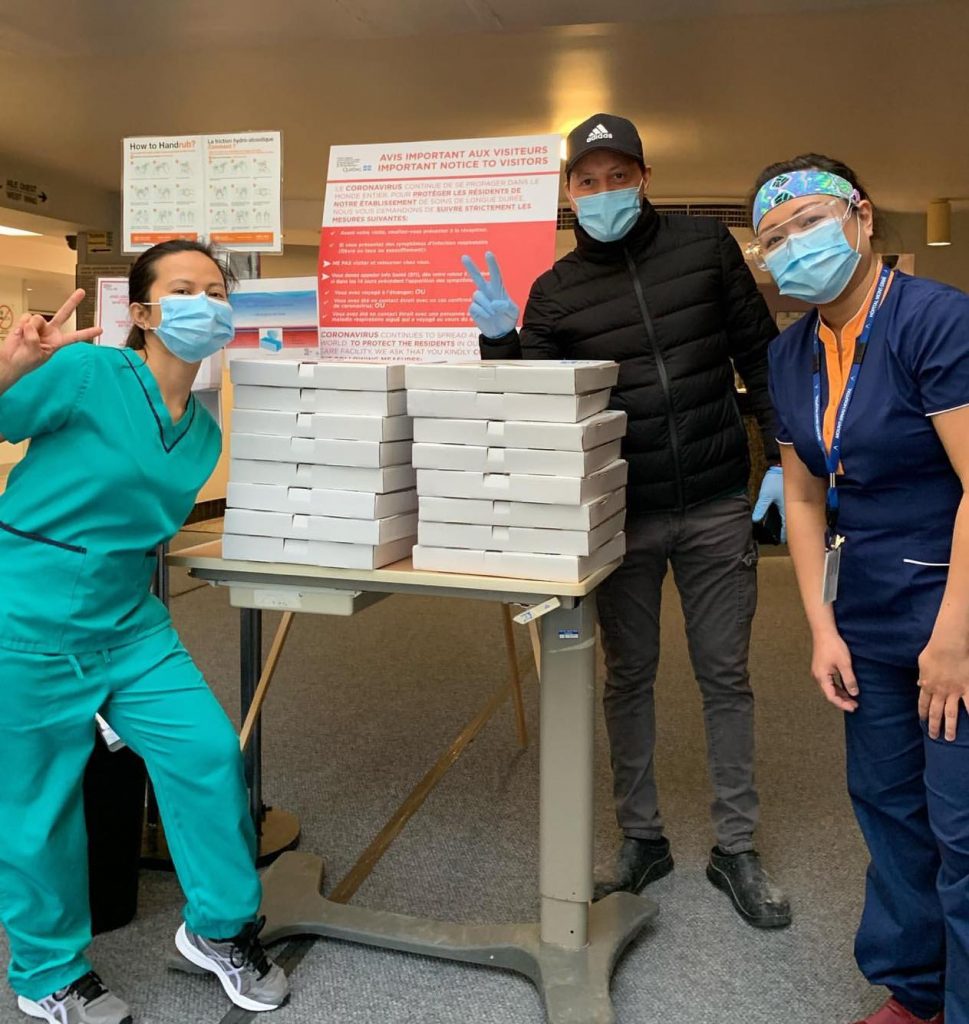 Reeling over pandemic developments and feeling helpless about the spread of COVID-19 in his beloved, hard-hit Montreal, Gianluca Esposito decided to support overworked medical staff at area hospitals the best way he knew how – through his own brand of Neapolitan pizza. Esposito is the chef and pizzaiolo at Kesté in Montreal. Along with Saverio Pileggi, Esposito owns the popular pizzeria that opened in 2015.

When the pizzeria was forced to close its dining room in March, Esposito, who is originally from Naples, decided to feed the hard-working medical staff at Montreal’s Jewish General Hospital, Lakeshore General Hospital on the city’s west island and other area hospitals.

The impulse to give food to others comes naturally to Esposito. Paying it forward is common in Naples, Italy, where he grew up. Caffe sospeso, which translates loosely to “suspended coffee,” is a century-old tradition. When customers buy coffee, they also pay in advance for a cup to be given to somebody else – usually someone who otherwise couldn’t afford it, he said.

He cooked up the plan with the encouragement of a friend. “Why don’t you start something like that?” the friend suggested. When word got out, the pizzeria’s website “went crazy – everybody wanted to get hold of us to donate,” he said. “Some other restaurants wanted to join us and other businesses too.”

“Since the pandemic hit, we’ve done only takeout and delivery,” Esposito told us. Looking to do something nice for staff at the hospitals, he set to work making the pizzeria’s signature Neapolitan pie. When Canadian Pizza spoke with the passionate pizzaiolo in mid-April, he had delivered about 400 pizzas and counting. “There is a nurse, she loves my pizza,” he said. “She was working one day and said, ‘I love your pizza.’ So I sent the pizza to them.”

Gianluca Esposito is chef, pizzaiolo, and, along with Saverio Pileggi, owns Kesté in Montreal. Photo: Kesté

Kesté pizza is greeted at the hospital door by doctors, nurses and staff with enthusiasm. Photo: Kesté

This note the grateful nurse posted on social media shows the gift was well appreciated: “Thank you to Gianluca Esposito of KESTE PIZZERIA FOR DONATING 18 pizzas to the COVID 19 NURSES AT THE LAKESHORE GENERAL HOSPITAL WEST ISLAND. The pizzas were delicious said the nurses. GOD BLESS YOU!”

They drop the pizza off at the hospital’s front door and sometimes doctors or other medical staff come down to get it, he said. His son, Luigi, and wife Gigi Mcnicoll. A post on the pizzeria’s website read: “Due to the phenomenon of Corona virus and government incentives, we will personally carry out most FREE deliveries and orders to take on site. Please note that we also deliver via platforms, without extra charge, by: foodora, UberEATS, GOLO Mobile Investors and SkipTheDishes!!!”

When we spoke he was preparing for a delivery the next day of 72 pizzas to Sacré-Coeur hospital, Montreal’s old Royal Victoria Hospital, which has a dedicated COVID-19 isolation section. Apart from the disruption of the pandemic, business is going OK, he says. Friends spread the word about the pizzeria. “I can’t complain. The government helps a lot. In Canada they’ve done a really great job to help the population. I find there are not that many restrictions, I wish there more restrictions. The problem will be later, after reopening. We don’t know when or how we will reopen.”

When we spoke he was preparing for a delivery the next day of 72 pizzas to Sacré-Coeur hospital, Montreal’s old Royal Victoria Hospital, which has a dedicated COVID-19 isolation section.

It started out as a direct donation from Esposito, then private companies started to donate. “Nurses and doctors were sending me messages directly to get some pizza. I had so much pizza to give away that it was a pleasure to give away.” The giving was contagious. One generous blogger called and wanted to have a contest. They donated three-quarters of the cost.

Esposito considers it a win-win. He has a lot of friends and family in the city and he knows a few on the front lines. Of the response from the nurse, “It was nice to hear from them, it meant so much.” One day the doctor at the children’s hospital came out to pick up the pizza, handed him an envelope with a $20, with the names of doctors and nurses.

“I’m still doing it, I’m happy to do it,” the pizzaiolo said.