A decade ago, vegetarianism and other alternative eating
philosophies were for the dogmatic. You were either a vegetarian, which
made you some sort of hippy, or you weren’t. 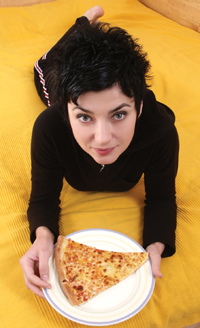 A decade ago, vegetarianism and other alternative eating philosophies were for the dogmatic. You were either a vegetarian, which made you some sort of hippy, or you weren’t. You either took supplements, which meant you were an athlete or a bodybuilder, or you didn’t.

All this according to Max Valiquette, president of Youthography, a leading youth-driven marketing organization, and the author who coined the term, “alternivore.”

Nowadays, explained Valiquette, more young people are incorporating some sort of alterna-eating rituals into their daily lifestyles. Some are looking for protein enhanced beverages at the corner store; the non-vegetarians are looking for vegetarian cuisine; and the anti-globalists are rejecting the big fast food chains, if not for anything else, then for the perceived food quality.

Valiquette said that with each passing day, more and more young people subscribe to the ethos of the alternivore: “the notion that the food and drink category is ripe for experimentation and none of the old rules apply.”

Fortunately, pizza seems to be a part of this paradigm shift that Valiquette describes. Pizza is as flexible as the youth market that once made it so popular. Independent pizzerias can keep pace with new youth-driven developments in food and drink – the chai teas and the soy burgers – by augmenting their already popular pizzas with some healthy alternative ingredients.

And dough seems like a good place to start. Dough is perhaps the most complex component of pizza preparation, and therefore allows for ample opportunity to add healthy grains, proteins and oils.

Canadian pizzaiolos are already experimenting with their pizza crusts. They’re adding natural and healthy goods, and newly formulated supplements to complement their pies.

THE BARLEY TRAIN
Don Marshall, manager of Doughboys Pizzeria in Winnipeg, Manitoba, recently switched to wheat flour augmented with barley grain. His motivations, however, had nothing to do with barley’s growing popularity. He started using Schroeder Milling’s Prairie Sun wheat flour with barley because it remedied the issues he was having with dough shrinkage.

Marshall was having problems with the dough he was using, because once it was stretched out, it had the tendency to shrink back on the pie sheet. When Marshall contacted Jim Schroeder, he was promised a barley-infused wheat flour that would help retain dough moisture and increase pizza shell flexibility. And Schroeder delivered on his promise.

Marshall isn’t marketing his pizza as having a barley crust, but the marketing potential may be there now that this old-school grain is back in vogue. Barley is being toted as one of the greatest sources of fibre and antioxidants. Because it is a soluble fibre, barley absorbs and removes cholesterol from the body, and helps to moderate blood glucose, according Bev Whitmore, registered dietician and agri-food consultant. Soluble fibres in general are said to help with weight loss because they’re so filling.

“As a dietician, I feel strongly about the health benefits of barley,” said Whitmore. And because Canada is one of the largest growers of barley, she recommends Canadian pizzerias get on the barley train.

“But it does change the baking properties a little,” warned Whitmore, “so people are going to have to learn how to use it.”
If breads are made with 100 per cent barley flour, they end up with much less volume, she said. For products like cookies or muffins, you can use 100 per cent barley, but for yeast products like pizza dough, she recommends about 25 per cent.

THE FLAX PHENOMENON
Flaxseed has a long history as one of the first crops ever grown, but it wasn’t until flax was outed as a significant source of the increasingly popular omega-3-fatty acid, that it became the latest throwback trend.

All the buzz about omega-3, the essential fatty acid that our bodies need but can’t produce, has inspired a long line of omega-fortified everything – breads, eggs, yogurt – you name it.

Omega-3’s are said to improve heart health, reduce blood pressure, and increase metabolic reactions in the body, according to Premium Gold Packaging, a leading flax producer.

About 42 per cent of flax seed is oil, and for years vegans and vegetarians have used a formula of flaxseed and water as replacement for eggs in baked goods. “It adds to the lift and contributes to a texture like that created by eggs,” according to the Vegetarian Resource Group.

‘Whey’ into protein
The lure of whey protein has expanded outside the bodybuilding community to the general public who are looking for a quick protein fix. Whey protein is a pure, natural protein sourced from cows’ milk. It is a rich source of the essential amino acids the body requires on a daily basis. It is arguably the most rapidly absorbed protein, which is why it was initially positioned on the market as a post-workout pump-up.

Today, baking manufacturers and independent restaurateurs looking to formulate products with whole grains are turning to whey protein, according to Laura Gottschalk, Dairy Management Inc. Because flours made with whole grains are high in soluble fibre, they may become gummy during processing. Since denatured whey proteins exhibit good water-binding properties, they can be used to maintain better water control, she said.

Tom Lehman of the American Institute of Baking said whey protein can be added to any pizza crust, but it works best in thick crusts because it binds water.

WILD ABOUT WALNUTS
Progressive pizzaiolos are turning to the rich buttery taste and golden colour of toasted walnuts to complement their pizza crusts.

Mydral believes that the unique combination of nutrients in walnuts (fibre, omega-3 fatty acids, antioxidants, etc.) and their ability to lower cholesterol have accounted for the huge increase in demand. “That’s what is driving the growth worldwide. In 2005, we had a record crop … people are just clamouring to get their hands on walnuts.”

Recent health research showed that walnuts contribute to keeping the arteries elastic, added Myrdal. For instance, after a high-fat meal, the arteries tend to lose flexibility, but if walnuts are included, the arteries are more responsive. Elastic, responsive arteries lead to improved blood flow and reduced blood pressure. Walnuts contain no trans fat, no cholesterol and no sodium.

In the end, if you’re trying to launch a new product into today’s youth-driven market, Valiquette says make it as
forward-thinking as possible. After all, the “coolest” young person is the one who wants to find out whatever it is that’s new – the one who gravitates away from mainstream fast food brands and towards unconventional, modern eateries.•