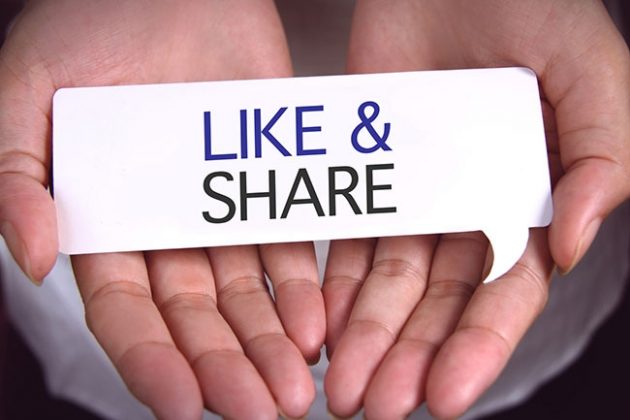 In terms of meaningful engagement, obtaining comments and shares tops the list while “likes” are much less important. Photo: Fotolia by Adobe Stock

If information is power, and data is information, then we’re all euchred.

Alexander Nix, CEO of data research firm Cambridge Analytica, is quoted as saying, “Today in the United States we have somewhere close to four or five thousand data points on every individual . . . . So we model the personality of every adult across the United States, some 230 million people.” If the name Cambridge Analytica rings a bell, it’s because it is directly connected to major criminal investigations currently underway in the U.S. and the U.K. The company used data obtained under hazy conditions to potentially manipulate the course of history. Facebook, by association, ended up squarely in the pot.

In terms of social networking and social marketing, Facebook is the “elder statesman.” The platform boasts one billion daily users and two billion monthly users. It has a wide appeal to both genders with 83 per cent of women and 75 per cent of men using the platform. The majority of all age groups from 18 to 65+ are on Facebook. With an appeal that broad, it’s safe to say that Facebook should be a key part of your digital marketing strategy. But what should we make of this scandal?

THOSE PESKY FACEBOOK QUIZZES
While investigations are still underway as of this writing, we know that Cambridge Analytica used an app that administered quirky Facebook quizzes to collect data. The quizzes might tempt you with headlines like “Sex Compass” but were actually based on well-documented scientific research. The quizzes were able to segment people based on their personality scores and accurately target those Facebook profiles most likely to be swayed by messaging designed to impact the Brexit vote and the U.S. election. The quizzes hit Facebook in 2014 and were shut down by Facebook later that year when the company realized that Cambridge Analytica and other such apps were actually harvesting data.

If you’re silently congratulating yourself because you were smart enough not to fall for any of those quizzes, here’s the thing that makes one’s blood boil: it doesn’t matter. If your cousin Larry took a quiz and you are his Facebook friend, your data may have been “scraped” along with his by virtue of your connection to him. The political aftermath of this scandal has caused Facebook to do some serious navel-gazing with regards to its responsibility to those who use the service and those who benefit from the data and pay the bills. These developments won’t cause a mass exodus from Facebook: we’ve come to rely on the platform too much. They have, however, resulted in some changes to Facebook’s business model and algorithms that as users of the service we need to understand.

FACEBOOK GOES BACK TO BASICS
Facebook began as a service to connect people with each other on a personal level. As the company looked for ways to make money, it had a choice: to charge a fee to those of us using it for personal interactions or to continue to make it available for free but sell advertising services to companies eager for access to users. It chose the second option.  No big deal. It wasn’t a new concept: television and radio have been doing it for years.

There was a catch, however. TVs and radios were strictly a broadcast medium where audiences were largely anonymous. The intimacy of Facebook’s platform combined with the wizardry of technology turned broadcasters into eavesdroppers on our most intimate conversations. Those conversations became powerful data that allowed people in search of political control to target all of us with messaging designed to play on our fears and desires.

THE DOUBLE-EDGED SWORD OF DATA MINING
Facebook changed its algorithms in January 2018 to favour personal engagement and connections over pages and news feeds. The local news outlets that had relied on the platform as a promotional vehicle have seen a drastic reduction in their engagement. Facebook has and continues to be a very appealing and effective vehicle for business advertising for companies of any size or budget.

As a small business you can buy ad space on Facebook and build a Custom Audience that is truly predisposed to be more interested in your product or service than a random audience is. You can identify a profile that you build based on age, gender, interests and location or let the Facebook algorithms create a profile to mimic a list of your existing customers. You simply import your customer email list and Facebook will find a whole bunch of new people who “look” just like the folks who already love you and buy from you. Facebook pixels can be embedded strategically on your website to build you an audience of people who visit your website and look at certain products or services but don’t take any action. If I look at the new deep-dish pizza on your menu and then leave your site, an ad for that same pizza can pop up on my feed the next day.

The irony in all of this is that we as advertisers are also using information obtained covertly to nudge a customer in a direction that benefits us. There is also a distinct possibility that because of the Cambridge Analytica scandal, in the near or distant future, being able to target messaging with data obtained this way may come under stricter regulatory constraints. For small businesses, it’s important to know what role Facebook should play in a long-term marketing strategy.

WHAT’S AHEAD FOR FACEBOOK ADVERTISERS?
Diversification is the best course of action. Marketing isn’t an expense: when done properly it’s an investment that should pay back any costs with increased revenue that continues to build. Facebook has the broadest appeal across genders and age groups of any of the social media channels, and given the size of its audience, it remains a solid place to spend some time and marketing dollars. The Facebook Live feature allows you to create short live videos that can be used to feature a new menu item coming out of the oven or a tour of your restaurant all decorated for an event.

In terms of meaningful engagement, obtaining comments and shares top the list while “likes” are much less important. Likes are referred to often as “vanity metrics” because people boast about them but the “drive-by” nature of the engagement isn’t as meaningful as taking the time to comment or share with your friends is. Facebook Live videos are rising in the engagement ranks faster than other types of posts. Locowise reports that the average video post in April 2017 reached 12.05 per cent of the total page audience, just ahead of photos at 11.63 per cent, links at 7.81 per cent, and status updates at only 4.56 per cent. Videos also had the most profound engagement. It also would be wise to diversify your digital footprint. Don’t forget about tools like Trip Advisor, Yelp, LinkedIn and blogging. Instagram is great to target twenty-something females but is also owned by Facebook. Facebook can change its algorithms or be forced to at any time and you wouldn’t want to have all of your digital eggs in one basket. •

Michelle Brisebois is a marketing consultant specializing in e-commerce and digital content strategy and retail/in-store activation. Michelle has worked in the food, pharmaceutical, financial services and wine industries. She can be reached at michelle@textrixconsulting.com.
Print this page