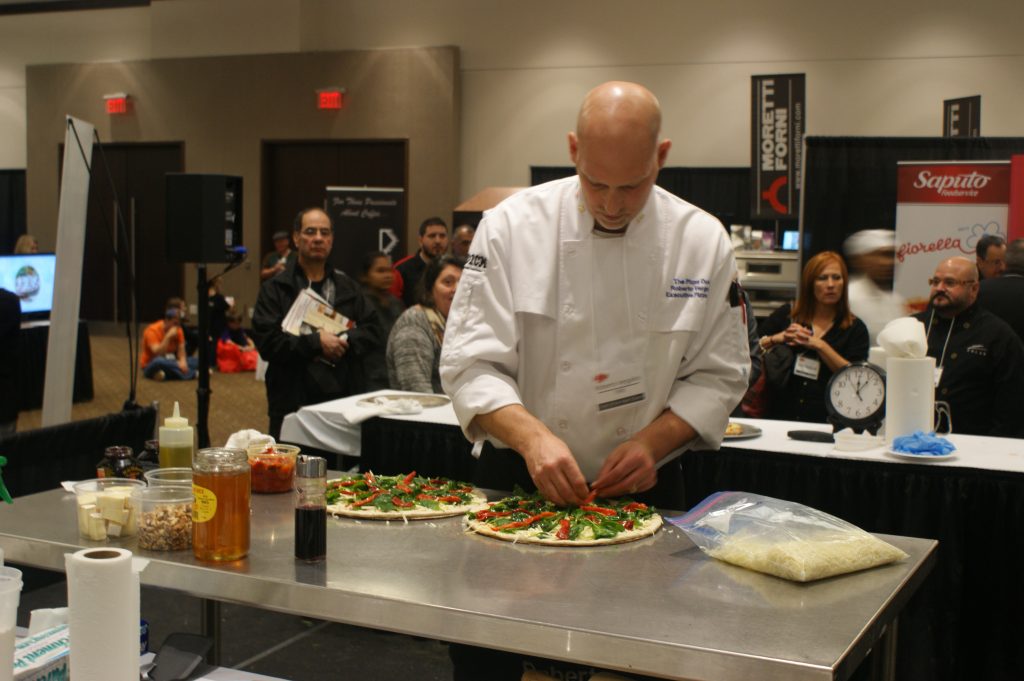 Roberto Vergalito competes in the Chef of the Year open division at the Canadian Pizza Show in October 2015.

Have a look at these standout Canadian pizza industry news stories, features and columns from the past year. Here’s to a busy and happy 2016!

Cheese, dairy prices going up Feb. 1, 2016
In December, the Canadian Dairy Commission announced the price of milk processed into yogurt, ice cream, cheese and butter will go up to an estimated 2.2 per cent effective Feb. 1, 2016.

Work-life balance is for everyone
In addition to managing your own work-life balance, employers also must be conscious of what is important to staff, Tom Stankiewicz wrote in his December column.

Fostering respect
Pizzerias are often fun, informal workplaces, and most owners encourage a little levity in their restaurant to boost morale. But when does teasing, joking and store banter cross that fine line into harassment?

Pizza party
Canadian Pizza magazine’s annual pizza party, held in October at the International Centre in Mississauga, Ont., provided a trifecta of attractions: a trade show tailored to the pizza industry, an educational program aimed squarely at helping operators thrive and a competition stage that delivered on excitement with new divisions.

How to catch a star
It’s hard to know who the right candidate is based on an interview but your chances of finding that person increase if you ask the right questions. Michelle Brisebois showed managers how to do just that.

Foreign-worker program overhauled
The federal government’s temporary foreign worker program has added limits on where low-paid hires can work and strict penalties for companies that do not comply, the Vancouver Sun reported in September.

The rise of fast-casual
Competition for share of Canadian restaurant spending is heating up, thanks, in part, to an emerging category that’s attracting increasingly confident consumers in droves.

Next stop: pizza
Recent growth in Canada’s tourism industry combined with the rising popularity of culinary travel presents a lucrative opportunity for Canadian pizzerias. Julie Fitz-Gerald explored how to work with other businesses to create a food experience.

An Italian campaign
The Italian Trade Commission in Canada in April launched a “Made in Italy” campaign designed to educate Canadians on the difference between authentic Italian and imitation Italian-sounding food products.

Six reasons e-ordering is the way to go
In today’s fast-paced world, you need to get your customers in and out as quickly as possible. Diane Chiasson explored a big trend at restaurants: the rollout of high-tech gadgetry and software, including e-ordering.

Sweet second victory
Edmonton’s Carlo Raillo successfully defended his title of Canadian Pizza Chef of the Year title in October 2014 – and he didn’t pull it off by playing it safe. Raillo told us about his cappuccino-inspired dessert pizza featuring cocoa powder-infused classic Neapolitan dough and rosettes of whipped cream.