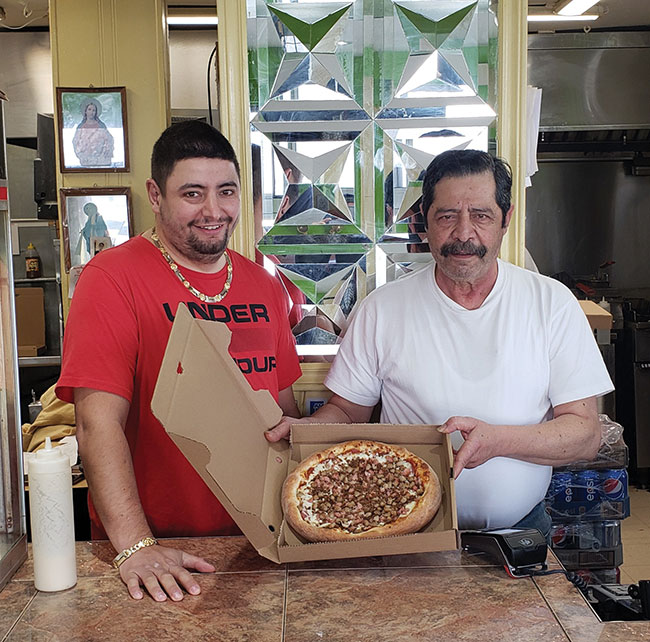 Mimo and Walid Farid represent two generations of Lebanese influenced pizza in the Halifax area. Mimo, Ziad and Randy Farid run multiple locations of the pizza shop started by their parents Walid and Safria Farid in 1987. All PHOTO: JEREMY HULL

There is no great secret to Walid Farid’s success, even if his story is miraculous. “You have to work hard with any business,” says the owner of Randy’s Pizza in Halifax. “You go from nine o’clock in the morning to 12 o’clock at night, seven days a week.”

Farid follows only one rule: “You have to look after your customers.” He wears a big smile when he tells stories. It’s the kind of smile you earn. “The customer is always right, even when they are wrong.”

Walid and his wife Safria had nothing when they immigrated to Canada. They made a lot of mistakes turning Randy’s Pizza into the thriving business it is today. “After a while it was worth it, but it was very hard,” he says. Walid arrived in Nova Scotia during a wave of immigration after the onset of the Lebanese Civil War in 1982. Randy’s Pizza opened its doors in 1987. Walid Farid and his contemporaries were the pioneers whose cultural influence on food and business would spread through every sector of the Maritimes.

It all started from the humblest of beginnings. When he landed in Halifax, Walid washed dishes until the late night became the early morning. “I think, why did I come to Canada?” He laughs. When war came to Lebanon, he and Safria didn’t have a choice. They weren’t entrepreneurs or restaurateurs. Walid was a teacher in Lebanon. They made a lot of mistakes. Their first business was a small grocery store. “It’s an easy business to run in spite of language,” says Walid, an adept storyteller who understands English well, but retains a thick accent after 40 years. Small stores like his first business began to struggle when big grocery chains extended their hours and opened seven days a week. The Farids were survivors, but their business was buckling.

“I would leave my wife in the store, and the kids sleeping under the counter, while I went out working so I could pay the bills,” Farid says. He found an answer when someone from his community opened a pizzeria. It was apparent that the margins were better in the pizza business than they were in the grocery business. He borrowed money wherever he could to open Randy’s. The gamble paid off. The Farid family has been selling pizza in Halifax for 35 years.

Randy’s is still family owned and operated. Son Mimo says that makes all the difference. “It’s the effort.” Mimo and his brothers, Ziad and Randy, are proud of their parents’ tradition and sacrifice. They use the same recipe their father and mother used in 1987.

Despite their influence over a generation of Maritime palates, Walid doesn’t believe there is such a thing as Lebanese-style pizza. “We’re working on it,” he says with a laugh. “We do a better job than the people who were here. We’re doing good.” Despite their success, Walid isn’t sure he’d get into the pizza business today.

Randy’s Donair is served on warm pita bread with sauce, the meat is cut thin and served hot with tomatoes and onions. PHOTO: JEREMY HULL

“There were only four or five pizza restaurants in the city in 1987.” It’s more competitive today. Cheaper, corporate pizza chains have flooded the market. There are also more traditional Italian options available. The Farid brothers maintain customer loyalty by making a pie like the one their parents made when the Lebanese  East Coast Pizza revolution began.

By the late 1990s, a lot of small towns in Nova Scotia had a Lebanese-owned pizzeria and a convenience store. The grocery model that failed in the city worked in rural communities that weren’t large enough to support a Sobeys or a Superstore. The pizza model worked everywhere. A culture of soft crust, big slice, Lebanese pizza spread throughout Nova Scotia. Walid didn’t have flyers. He did his marketing the old-fashioned way. “I gave out a few slices. Word of mouth is more important than anything.” Randy’s Pizza is packed with high school students at lunchtime, proving that, at least in the neighbourhood, the appetite for Lebanese-style pizza is still alive.

Walid’s sons run Randy’s multiple locations today. Given the booming real estate market in Nova Scotia, their father thinks it could be a good time to sell a proven pizzeria in the north end of the city, but the Farid brothers are keeping the business in the family. They are expanding to capitalize on the province’s growth by investing in a pair of immigrant-owned Filipino restaurants. Mimo is proud that they are paying their family’s good fortune forward. “They came with nothing, just like us.” With Filipino cuisine poised to be a breakout culinary trend, it’s a humanitarian effort and a savvy business strategy from a family with a proven track record.

A few things have changed since the late ’80s, but the recipe for success remains the same. Hard work, family values, and a belief in a better future have paved the way for the success of Walid and Safria’s family. So long as they are serving the Halifax Regional Municipality, customers can expect a high-quality pizza that has earned its reputation. You will discover Lebanese contributions in every sector of Nova Scotia’s economy today. Lebanese is now an established staple of the local culinary culture, but in 1987, customers were buying the pizza. The rest of the miracle needed time to rise.

Jeremy Hull is a freelance writer from Halifax, N.S., who has worked extensively at independent pizzerias in Toronto and in the food and beverage industry.