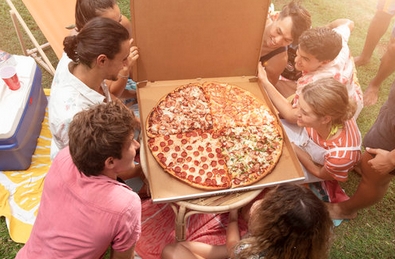 Australia – Domino’s stores in Australia are drawing lots of attention with “The Big One,” a pizza equivalent to two large pizzas.

The supersized pizza features four quarters of the chain’s most popular recipes – pepperoni, supreme, barbecue meat lovers and Hawaiian. Each is roughly equivalent in size to two large pizzas, according to a press release from Domino’s Pizza Enterprises Limited.

“We couldn’t make the pizza any bigger or else it wouldn’t fit through a standard doorway,” said Michael Treacy, Domino’s global development chef.

Each supersized pizza serves about 20 people and contains 800 grams of mozzarella and 600 grams of sauce.

“We had to source new, custom made pizza pans and specially-designed pizza boxes, which are much thicker and more robust than our standard boxes, so that they can withstand the weight of the pizza,” Treacy said.

“The Big One is only available for pick up as it is too large to transport on one of Domino’s electronic bikes. Customers will need to make sure they bring a friend to help them carry the pizza out of the store and clear the boot space in their car, so it can lay flat.”

Only two of the specialty pizzas will be available per store each day, said Nick Knight, Domino’s CEO for Australia and New Zealand.

“Customers will need to get in quick to reserve their pizza as only two will be available per store each day and we are expecting them to sell out,” Knight said.