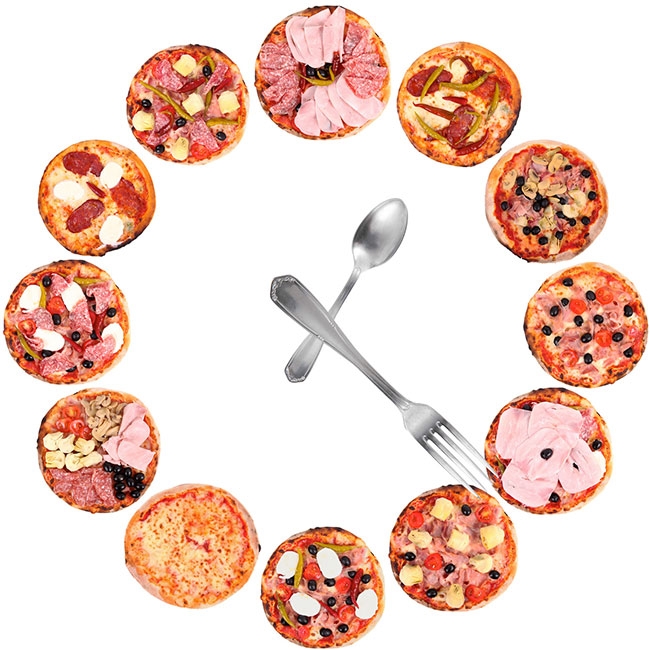 The demise of the day part and the rise of grazing mean pizzerias should consider broadening their marketing. Time your advertising to promote your products all through the day. Photo: Fotolia

Every year Canadian Pizza has traditionally reported on key trends impacting food consumption patterns. The trends have largely evolved over time with each year building on the previous one. From health concerns to ethnic influences to the yen for comfort food…it’s generally been about the product itself – the pizza.

This year is different. While flavour profiles and health concerns are still key factors, the big shifts aren’t only in what food we eat: they’re also in how we get the food we eat.

Innovation, or disruption, isn’t happening at the product level. It’s happening in the business model.

DISRUPTION DEFINED
A business model is by definition the structure by which the business operates. It includes such things as customer base, revenue streams, products and financing. Products are a component of the business model, and traditionally, companies have innovated by coming up with new products or variations on existing products. The term “disruption” first popped up in business literature in the mid-1990s to define a small company getting a toehold in an industry and stealing share from established players, eventually doing significant damage to their business and overtaking them. Disruptors are successful at this quest because they create a new business model that connects with an unmet consumer need. In the food industry, that disruption is largely coming from new and innovative distribution models.

Let’s look at what’s happening and think about how independent operators can take advantage of their strong customer relationships and nimbleness to continue to thrive.

DELIVERY: GOOD AND BAD NEWS FOR PIZZA
Delivery isn’t anything new but people’s appetite to consume food offsite has escalated dramatically. NPD Group reports that the 80/20 split between food sourced from home and that sourced from food service, including restaurants, respectively has shifted in recent years to be evenly split between the two sources.

This is good news for pizza because it is a sector experienced in the delivery model and bad news because there is now more competition. Independent operators can stay more competitive by focusing on menu items and packaging that work well for a delivery model, says Erik Thoresen of research firm Technomic.

“Operators need to limit delivery to those items that travel well and really have the flavour and freshness to impress the consumer,” Thoresen says.

Given this, it would be dangerous for the pizza sector to rest on its laurels because delivery is such an integral part of the business model already. Third-party delivery services such as UberEats and Just Eat do charge a fee but the cost of losing market share may be heftier than paying a user fee. Consumers don’t care about back-end operational issues and they increasingly want the convenience of delivery.

Pizza should learn from department store chain Sears’ mistakes when it comes to defending a channel it has traditionally dominated. The company pioneered direct-to-consumer selling when it launched its catalogue more than 100 years ago, but its failure to continue innovating has cost it dearly. Sears should own e-commerce in today’s retail environment; instead it’s now extinct.

BLURRING THE CHANNELS
Another trend is being expressed by both the product and business model innovation. Flavours are fusing, day parts are shifting and industries are melding. Look for food trucks to continue to be on the leading edge of flavour trends. And while Caribbean, Japanese and African cuisines are becoming more and more mainstream, you know the streams have been crossed when a delicacy like the sushi burrito pops up. The definition of mealtime also is blurring. Neilsen Company data suggests that 40 per cent of Canadians use snacks to replace a meal. Perhaps it’s time to offer all of your menu items throughout the day?

SPECIFICALLY TALKING SNACKS
According to Facebook IQ, which monitors social conversations about everything, including food, #isameal is frequently used as a hashtag alongside of posts about snacking. Facebook’s data indicates that foods traditionally considered part of the meal come up in conversations about snacking. These foods include salads, french fries and sandwiches. The social media site also reports that 63 per cent of U.S. consumers snack in place of a meal, 84 per cent snack between meals and the #snack hashtag on Facebook grew 20 per cent faster than other hashtags in 2016-17.

When participants in a University of Surrey study were given the exact same amount of food, they ate 50 per cent more if it was labelled a snack as opposed to a meal. The demise of the day part and the rise of grazing means that anytime is a good time to talk about food consumption, so look at your marketing in a broader manner too. Time your advertising to promote your products all through the day.

EAT IT ALL
We are starting to view food as a precious resource to be honoured. There is an increasing awareness of the environmental impact of food waste, not to mention the sheer arrogance of throwing out something that sustains life. In 2012, Statistics Canada estimated food waste per person to be 109 kilograms of fruits and vegetables, six kilograms of dairy and 16 kilograms of beef. The trend is showing up in a variety of ways: one example is “ugly fruit” – fruit that may not be perfectly shaped – popping up in grocery stores as a cost-effective alternative to pristine fruit.

Technomic’s Thoresen points out that the acceptance of more variation in food presentation is driven by a consumer desire for authenticity. “We’re seeing more restaurants serving food that’s all shapes and sizes,” he says. “Even things like french fries of different lengths and vegetables that aren’t all uniform in size; it’s similar to the in-home dining experience.”

Nose-to-tail cooking that uses the whole animal has been a wave in fine dining for several years, and as tends to happen, the trend is becoming mainstream. Promote the fact you support reducing food waste and encourage customers taking the uneaten part of their meal to go. Make sure you have the appropriate packaging to make this easy for you and the customer, and don’t miss the opportunity to use that packaging to have fun with your branding. An engaging message about the food being so good it’s worth “enjoying twice as much” will remind them of you with a smile when they eat it at home later.

The demise of the day part and the rise of grazing mean pizzerias should consider broadening their marketing. Time your advertising to promote your products all through the day.

PLANT-BASED PROTEINS
The trend to eating plant-based proteins is driven by a consumer desire to support the environment, but it is also influenced by that consumer’s budget. As animal proteins increase in price and awareness about the environmental impact of farming livestock grows, plant proteins are gaining appeal. There have also been great strides made in terms of making plant proteins taste great, for example, many delicious black bean burgers are on the market and on menus. In Europe, The Vegetarian Butcher is a new retailer making vegetable meat substitutes. The company is able to mimick the texture of meat fibre by using machine pressure to make a paste made from soybeans.

Millennials are key drivers of this trend. The Hartman Group reports that 14 per cent of millennials consider themselves vegetarians while the number drops to four per cent for generation X and one per cent of baby boomers. Millennials are promoting a plant-based culinary lifestyle through social media. Millennial blogger “Chocolate Covered Katie” showcases a variety of recipe hacks using plant-based proteins in place of flour and fat. “Flexitarians” consume a plant-based diet with occasional animal protein, so think beyond vegetarians when you consider plant-based menu items. The segment is much larger.

A 2015 report by Heraldonline says that 80 per cent of the 242 Americans surveyed admit to having leftover, cold pizza for breakfast. That breakfast pizza recipe you passed over because your operation isn’t open in the morning may just find new life on the dinner menu. Consider a call to action on your larger pizzas to tell people to “go for the big size…you can have it again for breakfast.”

This year promises to be another year of great change. Technology is affecting how we feel about our food and how we acquire and pay for our food. This disruption is actually good for the smaller operators because nimbleness and innovation are strengths of a less bureaucratic culture. When David fought Goliath he chose not to wear the King’s armour because it was cumbersome. Instead he opted for a slingshot. Nimble is good.