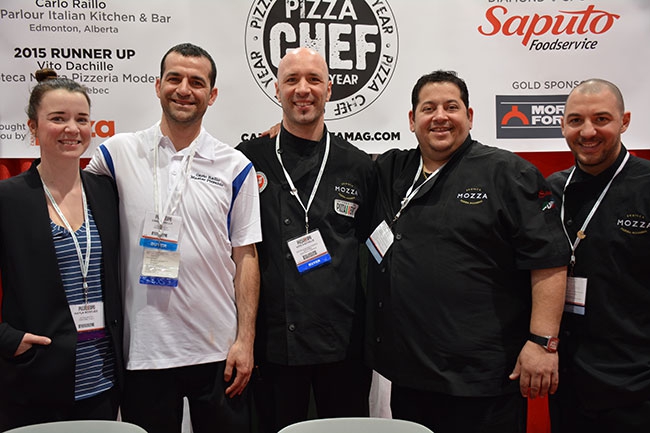 Plenty of Canadians stopped by the Canadian Pizza booth to say hello and wave the flag. Among our visitors were Kayla Wyntjes, husband Chef of the Year Carlo Raillo, runner-up Vito Dachille and his team Raffaele “Butch” Mercuri and Alfredo Pellechia from Enoteca Mozza Pizzeria Moderna.

Never mind Vegas and all of its charms. If you love learning about every aspect of pizza from the best and watching innovative pizzaiolos in action, Pizza Expo is a vacation destination unto itself.

We might put it down to a reaction to this winter’s nasty weather, but attendance at the March 23-26 event at the Las Vegas Convention Center was decidedly up this year according to organizers. In particular, attendance was unusually high at the Monday new-operator sessions, perhaps a sign the industry as a whole is thriving.

Plenty of Canadians stopped by the Canadian Pizza booth to say hello and wave the flag a bit. The Muntains, last year’s Pizza With Purpose winners, stopped by to say hello, as did our Chef of the Year Carlo Raillo and wife Kayla Wyntjes, and runner-up Vito Dachille and his team Raffaele “Butch” Mercuri and Alfredo Pellechia from Enoteca Mozza Pizzeria Moderna.

Vito handled himself like a pro in the Traditional preliminaries of his first International Pizza Challenge, creating a dreamy pizza called The Calabrese featuring nduja, a Calabrian sausage, and caramelized onions. Although he did not make the stiff cut to four pizzaiolos who advanced to the finals, he was happy with his pizza and smiling throughout the process, as were the gang of tasters who snapped up his pie.

Carlo competed in the Non-Traditional category with his frothy Cappuccino Pizza. Created and served at about 10:30 a.m., it made for a wonderful breakfast for a lucky few who sampled the light, crispy cocoa crust. Alas, the Italian treat, which was judged alongside such innovations as duck and reindeer pizza, did not advance to the finals.

Geographically speaking, Canada was well represented at the challenge with one British Columbian reaching the Traditional finals. Aaron Gehrman of Emilio Finatti Pizzeria in White Rock presented what he calls his “old-school” pepperoni pizza to judges. This was Gehrman’s second year competing: “As a chef, it’s so rewarding,” he told Canadian Pizza. “It comes down to ingredient profile and you get to be really creative.”

Meghan O’Dea of Pi Gourmet Eatery in St. John’s was happy with her second-place finish in the International division of the Non-Traditional category. This was O’Dea’s eighth time competing in the challenge. Her entry featured pickled lemon alfredo, salted pistachios and edible gold.

Jennie Dobbs and her team from Morris East Restaurant & Wine Bar in Halifax placed third in the International division with a pie made by downtown location head chef Tim Andresen that featured wine-poached pears prosciutto and blue cheese.

The formidable Armando’s Pizza team from the Windsor area was out in full force, with four members competing in the Pan and Gluten-free preliminaries, co-owner John Pizzo said.

Mario Flores of Williamsburg Pizza in Brooklyn, N.Y., won in the Traditional and Tim Silva of Pizza My Heart in San Francisco, Calif., triumphed in the
Non-Traditional category. Silva also will have his name added to the coveted Pizza Maker of the Year hardware.

We took in some fantastic seminars and demonstrations that provided lots of food for thought, including a catering how-to and a primer on creating a system of systems in your pizzeria (watch for more on these in future issues of Canadian Pizza and on the website). Here we offer highlights from a couple of standout talks:

He made a chipotle chicken pizza using quarter-inch pan-fried chicken strips seasoned on one side only, whole milk mozzarella, chipotle sauce (you can get away with as little as two ounces, he said) cherry tomatoes, lime juice, cilantro, sriracha sauce accentuated by olive oil. Keep the pizza in one spot in the oven, spin it right there in the oven to get a nice charring effect, Cybulski told a large audience.

He also made a chicken sausage pie with sun-dried tomatoes and a crispy chicken pizza (skin on). For this last he used olive oil, sriracha and crispy spiced chicken. The olive oil helps bring out the flavours in both sriracha sauce and the chicken skin, he said. He used just three ounces of whole milk mozzarella, noting that, contrary to popular belief, you don’t need a lot for a good pizza: you can pass it off as a healthier option.

Summing up the desired effect, he said, “You want customers to taste everything on the pizza and for the flavours to blend in the mouth.”

Plenty of Canadians stopped by the Canadian Pizza booth to say hello and wave the flag. Among our visitors were Kayla Wyntjes, husband Chef of the Year Carlo Raillo, runner-up Vito Dachille and his team Raffaele “Butch” Mercuri and Alfredo Pellechia from Enoteca Mozza Pizzeria Moderna.

Dos and don’ts with the ‘Dough Doctor’
Spending an hour with “Dough Doctor” Tom Lehmann is a little like going back to your high school science class – but it’s a highly applied kind of science aimed at solving some of pizza makers’ most puzzling dough problems. Lehmann, director of bakery assistance at the American Institute of Baking in Manhattan, Kan., and a technical advisor and field consultant for the pizza industry, hosted a Q-and-A session that started off by tackling the question, “What kind of flour should I be using?” He said many pizza makers use a typical pizza dough consisting of about 14 per cent protein, but that formulation usually results in a tough and chewy crust. The higher the protein, the greater the potential for crispness, but there is equal risk of a bad result.

One solution is to “mellow” or degrade the protein over four or five days, Lehmann said. However, most people don’t have the storage space. Mixing the dough less won’t work because of something called biochemical gluten development, he warned. A good starting point for total compressed yeast contribution is one per cent. Do not adjust yeast downward to store it over a few days. Instead manage it by keeping it in cold water. Aim for 80 to 85 F, erring on the lower end of that, and 80 is suitable for a reach-in cooler, he said.

If you have to store dough over seven days, strictly speaking it can’t be done without the quality suffering, Lehmann said. You must choose three consecutive days within that period as your three optimum days, he said, adding that over the years he’s been asked to create a dough that lasts seven days and found that it can’t be done without sacrificing quality. The optimum storage temperature: 36 to 38.

Lehmann also offered his take on wooden versus metal peels. Generally speaking, use wooden peels for prep and metal peels for baking, he said, admitting not everyone will agree. Why? In a cold climate, warm dough on metal may form condensation.

Such sessions are proof positive that sharing through lessons learned and face-to-face networking is what the pizza industry is all about and perhaps its very definition of success.