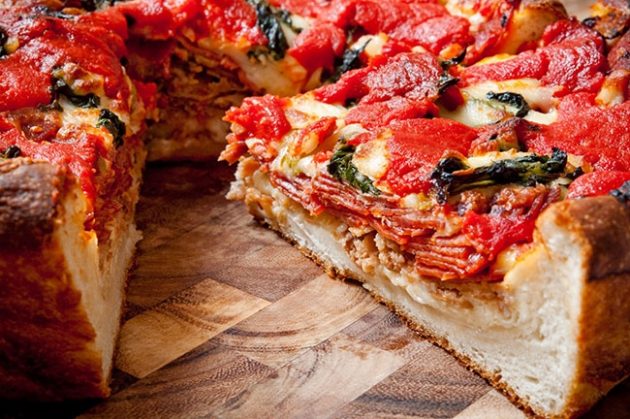 Lineups, sold-out pizza and dough reservations are sweeping deep-dish pizzerias across Toronto and the surrounding area as Canadian consumers drive demand for the decadent pie. It’s a stark change from the blistered thin-crust masterpieces of the Neapolitan craze that has dominated Canada’s pizza industry for close to a decade. It seems some customers – at least in Toronto – are looking for a change.

At Mickey’s Dragon Pizza in Mississauga, Ont., owner Sandi Stoyan allows customers to reserve their dough because many are driving long distances – close to two hours – for her deep-dish pizza. “If you’re coming from far away, we say, ‘We don’t have reserved seating but we do have reserved dough’ because we sell out,” she explains. “We have to hide the [reserved] dough in the kitchen because we’ve had people hijack other people’s dough. Someone actually leaned into the fridge, looked at the name and said they were that person. I was floored.”

Stoyan’s 900-square-foot space is jam-packed with dough fridges, as well as two ovens, in an attempt to keep up with demand. Upon opening her doors seven years ago, she recalls the previous owner saying the business was 90 per cent delivery and a two-person operation. Today, Mickey’s employs 12 staff and is takeout only – there’s no time for delivery.  If you’re lucky, you can snag a seat; there are six barstools tucked under a granite countertop and a couple of bistro sets that bring the total seating capacity to 12. Opening at 4 p.m. Tuesday to Sunday, the pizzeria often sells out within three hours.

While Stoyan’s operation offers thin-crust as well as deep-dish options, she says customers prefer her deep-dish pies at a ratio of 2:1. “It used to be that people who lived locally didn’t know what deep-dish was, so they would have thin crust. But little by little people started hearing about our deep-dish pizza and it just grew.”

In Toronto’s east end, two other deep-dish pizzerias with limited seating are enjoying lineups out the door, often selling out. Double D’s pizza on Gerrard Street East, owned by Mike Yaworski, is serving up authentic Chicago-style pizza; it’s a virtual rarity in the city. Since opening his doors in January, the tremendous response from customers led Yaworski to quickly open a second location in the city’s west end that focuses on takeout and delivery only. Both locations run with a limited menu of three set pizzas (Chicago Classic, Jalapeno Blue and Farmers Market) and a build-your-own option. There are no salads, no appetizers: just mouthwatering, deep-dish pizza that’s chock-full of fresh veggies, quality meats and cheese.

Drive a couple of minutes south to Queen Street East and you’ll find Descendant Detroit Style Pizza serving up rectangular-shaped pies with a light and airy focaccia-style crust and cheese that caramelizes and crisps around the edges. Owner Chris Getchell opened the business in August 2015. “We’re the only ones – in Canada I think – that are even doing Detroit-style pizza,” he says.

With just 22 seats, the pizzeria often has a lineup and can sell out on days when surging demand is even higher than anticipated.

“Our numbers were on the increase all summer long and we never had a week even in the worst of winter that didn’t beat our summer weeks,”
Getchell notes. “We keep breaking either single-day records or weekly records. We haven’t hit our potential yet, but I think we will by the end of this summer. I think we’ll be pretty maxed out here.”

He says his Detroit-style pizza, sitting at an inch and a quarter thick, is different from Chicago-style in many ways. “I don’t even like to call it deep-dish, because it’s just baked in a deeper pan. Chicago deep-dish is a thinner to medium crust that goes right up the sides and is a lot more cheesy and saucy; more of a stuffed pizza. Ours is a Sicilian pizza baked in a deeper pan. It allows the cheese to stay on the inside of the pan and caramelize to the sides – it’s the Detroit-style characteristic – so you have a crunchy, fried cheese on the edge.”

: Sandi Stoyan of Mickey’s Dragon Pizza has custom boxes made for deep-dish pies like this Custom King. She informs customers that the pizza won’t be cut unless they’re eating it in the restaurant, to avoid any messy disasters.

Getchell’s menu is solely focused on pizza, with a few carefully selected beer and cider options to complement the main attraction. His most popular pie is “Truff-Ghi,” topped with a mozzarella and brick cheese blend, caramelized onions, double smoked bacon and slow-roasted garlic cremini mushrooms. “When it comes out it gets post-oven white truffle sauce, fresh cracked black pepper, sea salt, grana padano, fresh lemon zest and fresh thyme. We go lightly on everything so it’s really well balanced. We go through 150 pounds of mushrooms per week for this pizza,” Getchell says.

The time and care that go into making beautifully crafted deep-dish pizzas are extensive and possibly account for why deep-dish establishments aren’t more widespread. From intensive dough prep to extra cooking time and specialty boxes, the considerations are abundant. “I think the biggest challenge with deep-dish is that you need a dough substantial enough to hold a vegetable pizza so customers can lift it up and eat it without it collapsing all over them. But it must be gentle enough so people can eat it without it breaking their jaws,” Stoyan explains. “Our dough is made fresh every night. It has very limited yeast, is gentle on the stomach, and is worked by hand and allowed to proof very slowly.”

Getchell agrees that dough management is the most challenging aspect to a quality deep-dish pizza. “We ferment the dough for 24 hours; then we pull it out in batches and let it sit for a bit until we can easily push each dough into the corner of the pan. Then we let it rise for about an hour in the pan before putting them away. Then prior to service we pull out several at a time and get them proofing so they’re close to room temperature before we top them and bake them.”

Getchell’s pies are cooked in a Montague oven for 10 to 12 minutes at 525 to 550 F. Stoyan uses two ovens. First, her pies cook for about 16 minutes at 240 C in a deep-dish stone oven. Then they’re transferred to a cast-iron, rotating five-foot oven and deck that operates at 700 to 800 F. “It has three infrared burners that blast the pizza as it rotates around. It’s a different beast altogether. The deep-dish pizzas always do victory laps in that one,” Stoyan says.

Boxing up these beauties is the final precisely planned step before customers can sink their teeth into Stoyan’s creations. She has custom boxes manufactured for her deep-dish pies and informs customers that the pizza won’t be cut unless they’re eating it in the restaurant, to avoid any messy disasters. Instructions are also given for transportation in cars (place on floor, not on seats!) and reheating for customers who have a long drive ahead of them. “I really care, and so do my staff, about what people are going to eat at the end and how they’re going to serve it. They’ll enjoy it more this way. We want people to enjoy eating and to have a good time with their family and friends. They need a happy experience.”

With surging demand for their deep-dish products, both Getchell and

Stoyan are planning for expansion in the near future.