Dairy prices rise by 11.7 per cent 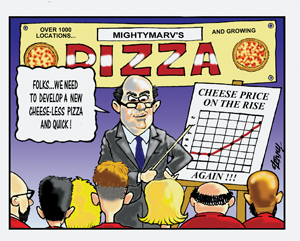 On Thursday, Dec. 9, 2004, the Canadian Restaurant and Foodservices Association (CRFA), which represents 17,500 restaurants, bars, caterers, hotels and other foodservice establishments in Canada, delivered a strong message to the Canadian Dairy Commission (CDC). The CRFA delivered 50 pizza boxes to the CDC, stuffed with 3,600 postcards from restaurateurs and their customers protestinganother dairy price hike. The same protest cards were also sent directly to the Minister of Agriculture and Agri-food.

The message fell on deaf ears.


The following day, the CDC announced that the price of industrial milk would increase by 11.7 per cent, effective Feb. 1, 2005. (Industrial milk is used to make products such as cheese, yogurt and ice cream.) The price hike will cost Canadian restaurateurs, who purchase more than $2 billion in dairy products annually, a total of $254 million per year.

The CDC says a significant increase in dairy prices was necessary to offset BSE-related losses by dairy producers. But critics argue that BSE compensation is outside the mandate of the CDC, and federal and provincial governments already have a process in place to determine appropriate levels of BSE compensation for beef and dairy farmers.

“If the CDC duplicates these efforts, it will amount to double-dipping at the expense of Canadian taxpayers,” says Stephanie Jones, CRFA vice-president of food supply. “Farmers deserve compensation for severe losses due to BSE, but not in the form of a
permanent price increase.”

CRFA is also calling on the federal minister of Agriculture and Agri-food to take steps to make the CDC more accountable to Canadian taxpayers. In the last 10 years, Canadian dairy prices rose by 38 per cent, while the cost of milk production fell by 5 per cent, according to CDC figures.

“Under Canada’s supply management system, dairy prices should rise and fall with the cost of production. But that never happens and the CDC continues to act without oversight and artificially inflate Canadian dairy prices,” says Jones. “This is hardly a recipe for long-term success. No matter what business you’re in, it simply doesn’t make sense to milk your best customers and drive down demand for your products.

“We want to work with the dairy industry to increase demand for dairy products, but it’s impossible under the current pricing system.”

Studies from the International Dairy Federation, the Organization for Economic Cooperation and Development, and the federal Ministry of Agriculture, clearly show that Canadian dairy prices are well above world prices. “The OECD report indicates that consumers subsidize the dairy industry by $2 billion a year – the equivalent of a $178 tax on the average Canadian household,” says Jones.

“A price hike of this magnitude, made without justification, calls into serious question the credibility of the Canadian Dairy Commission,” says Jones, “Taxpayers are being double-billed for BSE compensation now that the CDC has unilaterally decided to hand out this extra cash to dairy farmers. This completely undermines efforts by the federal and provincial governments to determine appropriate levels of compensation for beef and dairy farmers.”