B.C.’s Red Tomato Pies is growing solidly with the help of a loyal customer following 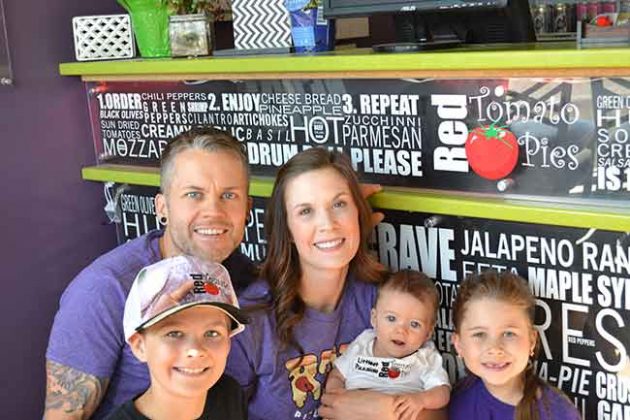 Red Tomato Pies is crushing it when it comes to customer service. The fun-loving pizzeria with locations in Williams Lake and Golden, B.C., is a favourite pizza spot for locals and tourists alike.

Locals love that it is a family-owned and -operated business that values people and relationships. Tourists love it because it was put on the national map in 2013 when it entered Saputo Foodservice’s Hall of Fame.

The pizzeria’s popularity and growth in traffic may stem from a growth in social media savvy and a dedication to the art of customizing pies to please all comers.

Owners Jason and Amber Akeson and their three children live in Williams Lake, a city in the Central Interior region known as the Cariboo, with a population of about 11,000 in city limits and about 30,000 in the surrounding region. The two big industries in Williams Lake are forestry and copper mining.

The Akesons run the Williams Lake store, which opened in May 2010, with the help of 16 employees.

The story of Red Tomato Pies’ growth is as winding as a B.C. mountain road. Amber’s experience is in the hotel industry, while Jason studied biochemistry with an eye toward a profession such as dentistry. But he started working in a friend’s pizzeria, Cdn2For1, when he was 21, loved it and became a partner in the business.

Jason and Amber moved to Golden, some 600 kilometres west, and opened a Cdn2For1 there and, later on, another in nearby Cranbrook, which Amber ran with her mother. The couple lived apart for eight years, running the two stores and visiting each other two days a week. “It was hard but there’s nothing like a bit of distance to make you realize you want to spend the rest of your life with someone,” Amber says.

The couple married in 2004, lived in Golden, and, after selling the franchise in 2008, moved back to Williams Lake where they conceived and opened Red Tomato Pies. They reopened the Golden store, which Amber’s mother and brother had continued to run with a dozen employees, in 2012 under the Red Tomato Pies name. Located in the heart of tourist country near Kicking Horse Resort and not far from Banff National Park, it does the lion’s share of its business during the summer tourist season.

Customer traffic drops from September to November. “You really notice,” Jason says. Staffing is harder in Golden because it’s such a rush in the summer and students go back to school in the fall and no longer want full-time hours. However, the shop is busy enough even without the tourists, Jason says.

Williams Lake’s business, on the other hand, is steady year round. Located halfway between Prince George to the north and Kamloops to the south, its good shopping is a draw, Jason says, even more so than in the larger cities.

The Akesons have three children, Solomon, 10, Avah, 7, and their new son Nova, who was born last May. With so much on the go, they feel fortunate to be able to balance home and work. “There is always one of us at home and we hand off to each other,” Jason says. “That’s a huge reason why it’s been so successful.”

They are able to make quick decisions to resolve situations that come up and keep customers happy, he says. Their staff, who, generally speaking, range from high school age kids to their mid-20s, don’t always feel comfortable making those kinds of decisions or immediately grasp what options they have, he adds.

HALL-OF-FAMERS
Red Tomato Pies have some pretty tangible evidence of their customers’ love in the form of their Saputo Hall of Fame award. The award means a lot to them because winners are determined solely by their customers’ votes.

The first time they entered in 2013, they finished first in their province and placed in the top 5 in Canada. “It was crazy there near the end,” Jason says. “Some bigger pizzerias like Maizerets in Quebec City had double the Facebook following we did, and I was curious to see how they did it.”

Coming so close to the top spot whetted their appetite to win the following year in 2014, and gave them incentive to improve their reach on social media. “We realized we had to engage customers,” he says. Engage they did, and it won them the overall title.

Red Tomato Pies has also been nominated for Chamber of Commerce awards several years running, something they consider an honour.

“These awards and distinctions have given us that bit of recognition. They tell pizza lovers, ‘Hey, we have to stop here and eat!’ ” he says. “Our community is proud.”

ONLINE FROM THE START
“We’ve always done online ordering,” Jason says. Their POS company helped set them up with an online ordering system. “It’s very streamlined and bumps to a service if the web goes down,” he says. “No orders are dropped and customers don’t even know there was any problem.”

Occasionally, there is confusion between the two locations, with people ordering a pizza through the Golden store, for example, then showing up in Williams Lake, he says with a chuckle.

Thirty to 35 per cent of their sales happen online, he says. “I think some customers are less timid when ordering that way. They keep adding what they want and that creates a much higher cheque,” he says. “Also, we have a Boston Pizza, Domino’s, Pizza Hut and Panago in Williams Lake. When you have that kind of competition, if you’re not offering those ordering options, people will go where they can get them and where other technology is available.”

‘WHAT COLOUR AM I THINKING OF?’
Red Tomato Pies has a unique way of repurposing pizzas that for whatever reason aren’t picked up (see the above confusion between locations) or come back due to topping mistakes. Staff post questions on their Facebook page, which is “liked” by more than 3,800 people, and award the pizzas to the fan with the first correct answer. Questions range from the non-skill-testing “What colour am I thinking of?” to menu-testing quizzes. “We try to relate it to our menu and business to draw people in,” he says.

“It gives people a chance to try something different on the menu,” he says. “People take it quite seriously.”

Customers take seriously their pizzas, which are often “staff-inspired.” They are always trying to stretch the envelope, Jason says, adding that they are probably best known for their Carnivore, Hawaiian and Crazy 4 Pepperoni pizzas.” Chicken pizzas, such as the Chicken King and veggie-style pies seem to be popular, he adds.

They do a gluten-free pie on request prepared on a separate cutting board and baked on parchment paper. “We’ve tried quite a few recipes. We’ve done a cauliflower crust and one made using ground almond meal, but it doesn’t rise the same. But we have to offer it, just like the chains.”

Although in some ways they are obliged to match the larger chains to keep up, they also feel that as independents they have a distinct advantage. “Independents are able to listen to their customers and customize their orders. They can cater to the customers, and as long as they are able, and willing, to do this, they will have that edge,” he says.

“We look at our pizza as some people look at their steaks: everyone wants theirs a particular way,” he says. “As soon as you’re saying ‘no’ you’re going to lose that customer.”

As for future plans, fans are telling them they should consider opening stores in Vancouver and other large centres. Jason says that’s something they may have to consider in future.

After all, the customer’s always right.