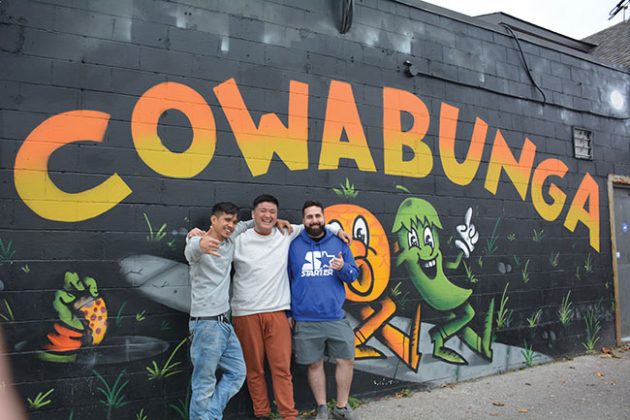 Cowabunga Pizzeria partners Justin Tanada, Andy Huynh and Joel Soares realized a dream in 2020. Says Tanada: “People shouldn’t be too scared to jump in and try something.” Photo: Canadian Pizza

For Justin Tanada, co-owner, the name means fun: “It’s what puts serotonin in my body,” says the 25-year-old, whose photo “Spicy Pep” was named best photo in our recent virtual competitions (see our Summit coverage in this issue).

The three took over their building in a busy suburb on Hamilton Mountain in March 2020 and were preparing to open when the pandemic hit, says Tanada during a visit by Canadian Pizza. With a wisdom beyond their twentysomething years, they hit pause to rethink the opening.

They went on hiatus for two months, cleaned working on recipes, brainstormed operations and marketing ideas while gutting the interior. The result is a cozy store with bright white subway-style tiles and a “cube wall” as they call it inspired by Q-bert. It’s also a cheerful place based on the music playing and late-morning team prepping for the day’s opening at 4 and enjoying their tasks.

The location on Hamilton Mountain plays into its business plan, but the business seemed designed as more of a brand than a single location.

“There were pizzerias before there that didn’t work,” Tanada says. “We thought it was a perfect location: central in the city, up on the mountain, an equal distance to most places in Hamilton and on a bus route.”

“We wanted to go for a ‘pull’ model,” he explains. “We wanted to attract people who will travel from far away to get our pizza.” He cites a customer from Timmins, an eight-hour drive away, who found them on Instagram and sought them out.

They employ about 10 people. Staffing has not been the issue it is for many in the food services.

“We’ve been able to find people whose motivation is not only money. “People get all kinds of skills in this job,” he says. “They want social skills.”

They prefer to hire someone who is keen to learn skills. It’s a model he calls “will versus skill. It’s important to have good trainability,” he says, adding that management’s most important role is to teach, lead and train.

Tanada, who worked for several years as a telesales manager, is interested in the psychology of what people want. “I don’t think fancy and gourmet pizza hits on social media,” he says. “People are looking for playful posts awesome photos.”

They have found this an efficient way of operating. People pre-order starting at 10 a.m. and that lets the team estimate and assign pick-up times between 3 and 9 p.m. It’s a system designed to maximize efficiency and profitability.

Under this streamlined takeout-only model, they rely on Facebook and other social media to take orders. Tanada, who has operated the @pizzatography Instagram page since 2017, racking up an impressive 22,000 followers. No doubt many of those followers migrated to the Cowabunga Instagram, which has 14,000 followers.

Their idea is always to give people what they can’t get elsewhere. They use a house blend of high-quality pepperoni. Dips are made from scratch. And they import U.S. snacks such as Mike and Ike candies and Tahiti Treat to create a sense of nostalgia.

How is business? “Well, we have no investors and we are selling out every weekend – making 100-200 pizzas,” Tanada reports. It’s a customer base of repeat customers that is steady and growing with new fans. | CP