Christmas at the pizzeria 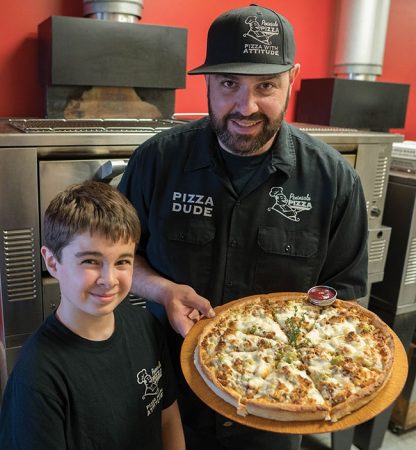 Forget Santa. We all know the holidays are about spending time with loved ones, showing kindness to others and sharing delicious food. I spoke with three pizza professionals who are helping unite their communities by making creative, delicious pizzas and serving them with love.

We hope reading these stories will fill you with good cheer and inspire you to create and become a hub for your community.

PIZZA WITH ALL THE TRIMMINGS
Rick and Tina Scott of Peninsula Pizza in Saanichton, B.C., make a mouthwatering Turkey Dinner Pizza that prompts wise customers to start placing their orders in November.

Rick’s parents, Ray and Janie Scott, started the tradition after opening the pizzeria in 1999. Rick and Tina have run the successful pizzeria, which is located in a strip mall not far from new subdivisions, family farms, schools, for the last 12 years. Rick describes the pizzeria’s motto as “Pizza with attitude!” which involves a little good-natured “giving it back to customers.”

Rick, 46, has worked in the business for more than 30 years since helping his uncle in another restaurant. When the couple assumed full ownership in 2016, Tina took a leave of absence from her government job, planning to return to the job once things were running smoothly. “It’s been two years and she hasn’t had to go back,” her husband says, somewhat incredulous.

They have carried on the tradition of the Turkey Dinner Pizza with enthusiasm. It all began with a fridge cleanout, years ago. They started out serving the seasonal pizza on Christmas Eve at a big party. Now they offer it throughout December.

They start taking orders for the Turkey Dinner Pizza in early November. It sells at a higher price – slightly higher than a normal classic, but customers are paying with pleasure.

He has tried a pumpkin purée base, but without the same level of positive feedback. When they introduce a pizza they know right away it’s a hit if they get six or eight immediate responses on Facebook. Rick figures he’s tested 150 pizzas over the years and, like Ebenezer Scrooge taking a tour with the Ghost of Christmas Past, he sometimes scrolls back through his posts for inspiration and to revive past ideas. Creativity is important to the pizza chef, who believes, “If you can dream it, you’ve got to make it come true.”

Building on his experience marketing musical bands, Rick has been diligent about posting a new pizza on their Facebook page every Friday for the last five years and he’s finally starting to see a good response. He and Tina now have 1,233 followers on the platform. “Good pictures and a little comment go over pretty well,” he says. “It’s a way of testing out our pizzas.”

“My marketing strategy is ‘If I like it, other people will,” Rick says. But customers are front and centre: “It’s all about catering to people’s needs and wants,” he says, a strategy that prompts comments like, “Best thing I’ve ever eaten!”

The family complements their specialty holiday pizza by giving their time, effort and product as part of community outreach. For the past 14 years, Peninsula and the Saanichton Village Association co-host a Saanichton Community Christmas that includes a pancake breakfast by the Central Saanich Lions, a visit with Santa, appearances by town mascot Marty the Marmot, gingerbread cookie decorating and carriage rides.

At the annual Christmas bazaar they donate pizzas to local organizations who then sell it by the slice and keep the funds raised.

The Scotts also keep an eye on the less fortunate and ask local politicians which neighbours may need help. They then hold a fundraiser and give the money and a couple of pizzas to a family in need once a year.

ITALIAN DESSERT PIZZAS
A continent away in Rome, Maurizio Capodicasa, a master pizza chef and consultant, is busy in his kitchen dreaming up festive dessert pizzas featuring popular Italian sweets, panettone and torrone (nuts and nougat). Capodicasa answered our request for holiday pizza ideas on Twitter and let us know about his magical creations. A culinary consultant and award-winning pizza chef, the gregarious experimenter enjoys the creative side of pizza.

Capodicasa has an interesting career story, which involves a creative change of direction. As he explains with the help of his assistant, Luisa, in the early 1990s he owned a successful car rental business that served well-known Italian politicians, journalists and other public figures. After the “Mani Pulite” corruption scandal, all contracts in effect at the time with external services societies were revoked and the businessman had to reinvent his life. After attending a pizza-making course on a whim, he opened his own pizzeria, L’Arte della Pizza, in 1995.

However, he found his true calling was to teach and three years later started teaching pizza making. He taught in a prestigious private school in Rome for 14 years and held pizza courses subsidized by the European Community in co-operation with Regione Lazio.

In 2012 during the SIGEP exhibition in Rimini he won the world championship of pizza in teglia (by the cut) and he was awarded second place with his teglia dessert pizza.

His winning pizza was made with cauliflower mousse together with salmon in rose sauce, rucola (arugula) and black pepper. His winning dessert pizza was made of sliced apples moistened with Cointreau and topped with Irish cream, powdered sugar, chopped hazelnuts and edible flowers.

During these years Capodicasa founded his professional pizza school, Pizza Consult, where he teaches individual courses and helps operators plan, design and start up their pizzerias. He is an expert in making the specialized Pinsa Romana, after having worked with its inventor, Corrado Di Marco, to develop a flour made of rice, soy and wheat flours, and to find the correct way to manipulate the dough. Capodicasa has taught the technique to others for 14 years.

The creative chef wanted to create dessert pizzas that reflect the Christmas atmosphere. He chose as his main ingredients nougat and panettone because they are the typical Italian Christmas sweets.

Torrone pizza
Torrone, a type of Italian nougat candy, is a cream-coloured confection of sugar, honey and egg whites speckled with toasted, sliced almonds. While it is normally a treat eaten around the holidays, torrone can be enjoyed any time of the year, the chef says.

The history of torrone is convoluted and uncertain. In Italy, torrone is usually sold in long rectangles – a light-coloured confection with sliced almonds visible throughout – like an oversized candy bar. In all of its forms, torrone is beloved all over Italy. The best honey candy, however, is made in Sardinia, Calabria, Sicily and Abruzzo – anywhere the best almonds and hazelnuts can be found. In the Veneto region, a form of torrone called mandorlato, made with almonds, is very popular. The length and method of toasting the nuts seems crucial in the making of an excellent torrone.

Traditionally, torrone is eaten after lunches and dinner from Christmas Day until Jan. 6, or the Epiphany. Today, many varieties exist: soft and hard, classic or with chocolate, with almonds, hazelnuts or occasionally pistachios. Torrone is often served with an after-dinner amaro (bitters), sambuca (a sweet anise-tasting digestivo), or a liquor such as Strega.

The torrone pizza consists of a crust smeared with honey, mascarpone cheese with rum and powdered sugar inside, and savoiardi biscuits (ladyfingers) moistened with rum and crumbled. It is topped with a torrone and dark chocolate crumble, and pistachios.

Panettone pizza
Panettone, perhaps Italy’s most famous Christmas export, is a sweet bread full of raisins and orange zest and baked in a distinctive dome shape. It was created in the early 20th century as an affordable dessert, and taken halfway across the world by Italian immigrants. “Most Italian families will have panettone at Christmas time, but you can be sure to find it everywhere in Milan, its birthplace. Panettone is sometimes served with mascarpone custard – just what you need after Christmas lunch!” Capodicasa says.

You can find more pizza ideas and details of Capodicasa’s pizza courses at pizzaconsult.it.

ROOM AT THE INN
Peter Marinakos loves his community so much he included it in his name when he opened in 1974.

Marinakos, owner of Tops in Orillia, celebrates the holiday by opening his doors on Christmas afternoon and making pizza, free of charge, for the people of Orillia, Ont. (a city of about 30,000) and surrounding area. He and his family – wife, Toni, and grown sons Jimmy and Christopher – open their store from 1 to 3 p.m. on a day when finding an open business of any kind can be a challenge.

It’s a tradition that began in 1992. As Marinakos tells it, “I started thinking about doing something for Christmas a couple of years before that. I wasn’t sure how to do it.” Tempted to make a traditional Christmas dinner, a friend convinced him to serve the pizza their restaurant is so well known for.

“We didn’t know what to expect. We opened and more than 60 people came,” says Marinakos, whose restaurant is known for its gourmet Greek, chicken souvlaki and Garden of Eden roasted vegetable pizzas.

The family won’t take any money on Christmas day: Marinakos is firm about that. “If they try to pay me, I thank them and tell them, no thank-you. I tell them, ‘Please, let me live my life the way I want to,’ ” he says earnestly. “The goal is to make people happy.”

And they’re not counting the slices that day. One year a man showed up, nearly frozen after riding his bike to the pizzeria. After eating a complimentary slice, he was offered a second slice by Marinakos’ wife and partner, Toni.

The tradition aims to meet needs in more ways than one, and it seems to echo the idea of the Christmas story of Mary and Joseph, who could find no room at the inn for Mary to give birth. Tops in Pizza is a place that is open when other places aren’t – it’s just one way they differentiate themselves. So if you’re travelling and need to make a stop to, for example, change the baby’s diaper, you’ll find the shop open on Dec. 25, the owner-operator says.

While non-family staff is not asked to work on Christmas day, they sometimes volunteer to come in. They are open and serving 18-inch pepperoni and cheese pizzas for two hours, from 1-3 p.m., but they begin prepping at 11 a.m. and don’t finish cleaning up until 5 p.m. His rough estimate suggests they made about 80 or 90 18-inch pizzas, including those served to first responders.

The pizzeria also provides complimentary pizzas to the local hospital, fire departments and other emergency staff who must work on Christmas day. They don’t call first – they just show up with pizza. “We know how many pizzas to deliver based on how many staff are usually on duty,” Marinakos says. “It’s our way to say thank you for all you do for us.”

Of the tradition, he says, “It seems to fill a need. The day no one shows up, I will be happy.”