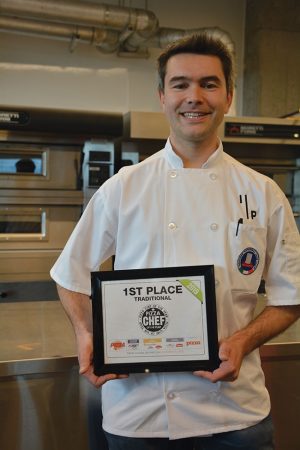 Giuseppe Cortinovis never fails to surprise me. In the past, our Traditional Chef of the Year has wowed me with his dough experimentation, amazed me with his travels around the world in search of ideas and impressed me with his capacity to learn.

During a phone conversation from his home in Vancouver, he surprised me once again with the sheer number and variety of jobs and special projects he is juggling.

Through the week the bright, energetic Cortinovis works for Ignite Pizzeria in Vancouver, making pizza and developing the shop’s menu.

On weekends he waits tables at Mangia e Scappa (translation: Eat and Run) in Fort Langley, B.C., about 40 minutes southeast of Vancouver. He likes the change and is enthusiastic about the work.

I express surprise that he has the time, energy and interest in being in the front of house – considering he has so much experience in the kitchen and an obvious passion for experimentation.

“I love it!” he says with a laugh. “It’s less stressful compared to the kitchen. At the end of the day, I’m clean. I can go to the pub and drink a beer.”

Cortinovis explains: “After a day of working in the kitchen, you can get pretty dirty. Sometimes I need to have a shower to get rid of the oil, tomato and especially the smell of garlic.”

Serving is another kind of stress, he adds. But the pay is good. While policies vary from restaurant to restaurant, at Cortinovis’ weekend job a server takes home 79 per cent of his tips and shares the other 21 per cent with the kitchen.

People talk about the gig economy. This energetic 38-year-old is living it, with more projects and hobbies on the go than there are days in the week.

EXPERIMENTATION
He is a member of the APCI Canada (Professional Association of Italian Chefs of Canada), for whom he recently taught pizza-making courses at Vancouver Community College. As part of a larger goal, he is now promoting Italian food in Canada and around the world.

Once a month, through the the Italian Cultural Centre of Vancouver, he instructs a class of home cooks on the finer points of pizza making, including baking using biga. Cortinovis is a big believer in the biga, a type of pre-fermentation used in Italian baking that is thought to add complexity to a bread’s flavour and create a light, airy texture. In March he will collaborate on a course at the ITHQ (Institut de tourisme et d’hôtellerie du Québec) with the School of Italian Pizza to teach these and other skills to restaurant operators and those looking to get into the business.

“I’m still working on hydration – trying to make my dough more hydrated,” he says. “This gives it a better structure, it rises better.” While a Roman dough typically takes 12 minutes to bake, the crust he is working on now takes only a couple of minutes, he says. It is made using semolina, is cooked on a stone and is thinner than a Roman pizza crust.

“When you start experimenting in dough, it’s never-ending!” he says excitedly.

THE FUTURE
Nearest and dearest to his heart are plans for his own business – a pizza shop, bakery and café he hopes to get off the ground with his girlfriend and business partner, Mizuho Furukawa. “We are still on the design phase,” he says.

They are considering locating in a 2,000-square-foot heritage building. “It takes a lot of electricity to run the equipment, including coolers,” he says. They are thinking about having candlelight service, partly because the electrical capacity is limited and partly for the ambiance.

“We will have a meeting with an architect soon to see if the location that we have in mind can work for our business model,” he says.

He and Furukawa have been to Italy and London, England, to learn about new pizza trends. They will soon travel to Japan to complete their menu ideas and explore new baking technology.

“The menu will contain three different innovative styles of pizza,” he says. “One of them will be traditional with a twist on the hydration level and proofing and maturation methods; the second one will be deep-dish from Roman tradition.”

The third one he is keeping under wraps. They hope to open a year from now.

Furukawa, who focuses on the management side of the business, came with Cortinovis to the Canadian Pizza Summit in Toronto in October, where the competitive pizza maker earned the title of Chef of the Year – Traditional.

Afterwards the two went to Europe to research trends in preparation for their restaurant venture, stopping in his hometown of San Pellegrino Terme, Italy – a resort community in the Lombardy region known for its namesake mineral water – to visit his parents’ bakery. The bakery, Sapore di pane, is thriving, he says, adding that his sister is using social media effectively to help draw in customers. This is allowing the family to shift its focus from supplying retail stores to selling their bread in house only.

SCHOOL OF LIFE
Cortinovis has an impressive store of experience, much of which was gained on the job. He spent his teen years working in restaurants as a server and pizza maker. Cortinovis’ mother opened Sapore di pane when she was 50 in 1999 in partnership with his uncle. Cortinovis helped in the business from Day 1, making pizzas to help pay his way through university where he studied engineering. When his uncle left the business, Cortinovis worked at the bakery full time for several years.

On a quest for adventure, he found himself in Fort Douglas, Australia, where he and a partner opened a restaurant called Trattoria Eataliana and a bakery (Anna’s Rolling Pin). His next stop was London, England, where he got into a jam – literally – creating and selling innovative flavours of the sweet concoction as The Covent Garden Jam Company.

After immigrating to Vancouver, he worked as a pizza chef at Bella Gelateria, a café; Glowbal, an upscale steakhouse; and Nightingale, a restaurant owned by Hawksworth Group.

Cortinovis has more credentials under his belt, among them a professional course in traditional pizza at ITHQ in Montreal and a Roman pan pizza course with respected chef Massimo Bosco in Sardinia. He is well trained after working in many restaurants. But he is a believer in learning by doing – and by travelling. This love of lifelong learning is celebrated on a website he built to begin consulting: giuseppecortinovis.com.

‘THE QUEEN’
Cortinovis’ winning pizza, “The Queen,” is a twist on the traditional Margherita. He happily recalls the day it earned him top honours:

“I was quite calm and I remember when I checked the pizza that day, I was quite happy. You know, sometimes you bake the pizza and you think it’s good or it’s not cooked or it’s overcooked? That time I took it out of the oven and it was just how it’s supposed to be,” the veteran competitor says. He used a round screen to help prevent the crust from burning, which he says is a common concern in competitions, where the oven temperatures are variable and must accommodate a lot of competitors.

His pizza was double-baked. First, he baked it with San Marzano tomatoes and pecorino romano cheese to about 80 per cent doneness. He then took it out, added buffalo mozzarella and cooked it another 20 per cent. After baking the buffalo mozzarella so that it didn’t melt too much and retained some texture, he added extra-virgin olive oil. The final touches are Maldon salt and basil. The basil is specially arranged as a metaphor for the evolution of the Margherita. He explains: “I put the micro basil close to the edge, then I put the big basil in the centre. By doing this, I would like to show the life of the basil from when it’s small to when it’s fully grown in the centre. The leaves get bigger and bigger and bigger until you get a big leaf in the centre. The idea is to show how the basil grows and how the Margherita [changed from] when it was created to now.”

PIZZA EVENTS: ‘A MASSIVE CHEAT OF INFORMATION’
In addition to two stints as runnerup to the Chef of the Year in Canada, Cortinovis has competed at the International Pizza Challenge at Expo, placing second in the International division of the Traditional competition. A highlight in Europe was placing fourth at the Giropizza d’Europa at Sigep, an exhibition in Rimini, Italy, in 2015.

I ask what drives him to come out to the Canadian Pizza Summit and Pizza Expo to compete again and again. “I want to learn. It’s a good way to learn for free,” he says without hesitation. “I can go there, I can watch the other people, have fun, do what other people are doing and maybe get ideas. That’s the main reason.”

“Sometimes I like to go into a new restaurant and see what they do,” he says, adding that having many restaurant owners in the same spot all doing their thing inspires him.

“That’s even better,” he explains. To see 40 restaurants would take him a long time. “They are doing the pizza they probably think is the best on their menu. It’s a massive cheat of information,” he says.

FOOD TRENDS
As for where the pizza industry is going, he points to the trend of people ordering from home or picking up and eating at home. He also has noticed more interest in vegan dishes. He was surprised to learn from serving staff at Ignite Pizzeria that requests for vegan pizza are going up by the day. The pizzeria used to make one vegan pizza; now they make four. A pizza he has been working on lately features jackfruit, edamame and cashew ricotta. “We realized the vegan market is growing,” he says.

Cortinovis hints at a few other projects in the works that it’s too early to talk about. By the end of our conversation, my head is spinning. But it is inspiring listening to him spin his plans.

What does the soft-spoken but gregarious chef do when he’s not working? It might not be a surprise that, with a need for speed, he loves to ride his Italian motorcycle, an Aprilia Shiver 750 CC. But it might be a surprise to learn that he also writes: he’s written three books about his adventures – called IABC (Italy, Australia, Britain, Canada – he’s still working on the book about Canada). Full of fun wordplay, every chapter starts by describing something he has learned. Cortinovis is translating them from Italian to English, a project he began when he was off work after burning his hand. “It was meant to be, my body telling me to slow down,” he says philosophically.

That may be the closest this forward-looking, constantly moving entrepreneur comes to resting. But he clearly enjoys living life at warp speed and finds joy in whatever he’s doing.

The Canadian pizza scene is richer for it.

THE QUEEN (A TWIST ON THE MARGHERITA)
By Giuseppe Cortinovis

If you’re attending the International Pizza Expo in Las Vegas, be sure to watch Giuseppe compete in the Traditional division preliminary round of the International Pizza Challenge on Tuesday, March 5. Chef of the Year, Open, Dean Litster will compete in the Pan division on Wednesday, March 6. You may also catch them at Canadian Pizza’s booth, 3052!