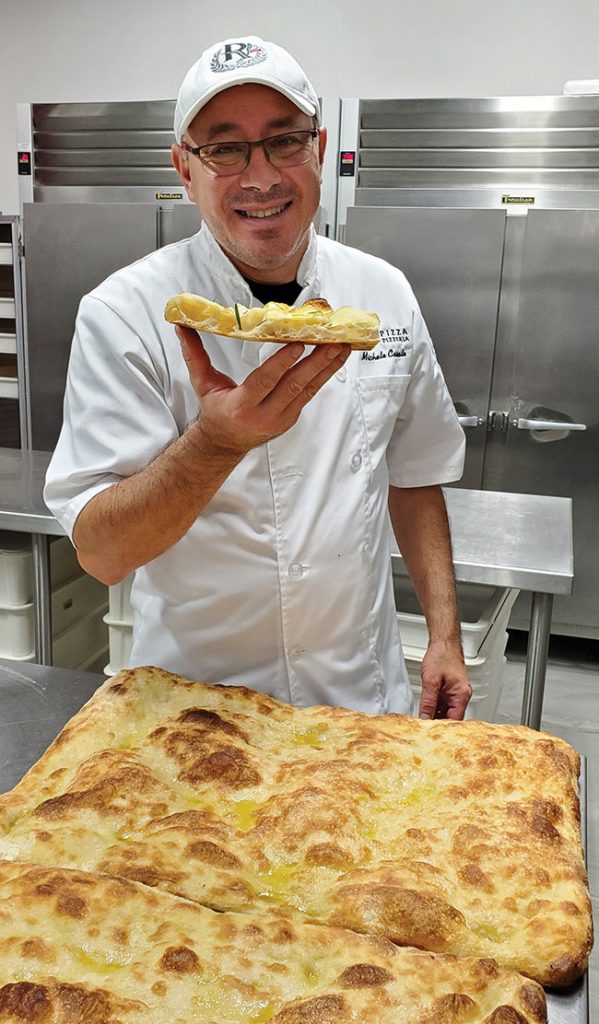 When Casale, owner of Redipizza Pizzeria Inc., a bakery and pizzeria in LaSalle, Que., spoke with Canadian Pizza in early September, he was keen to talk about the technical aspects of baking.

But his interest in the science is well matched by his passion for the process and his signature product, Roman pizza al taglio.

It had been six months since pandemic restrictions began in March and an emotional rollercoaster of a season. As a precaution, Casale closed Redipizza. Starting in June, Redipizza began doing a brisk take-out business. Customers returned and sales have been steady.


Redpizza’s story began four years ago, when Casale opened his fast-casual concept in the busy Montreal suburb. But Michele (pronounced Mee-kel-e) Casale’s path to becoming an expert at Roman pizza making began at age 19, when he came to Canada. He worked in restaurants and hotels for more than two decades. His brother discovered Roman-style pizza when visiting Italy, shared the discovery and the obsession began.

“I quit the hotel even though I was making good money,” says Casale, now 41, who hails from Puglia. “I went to Rome, studied for one month, came back to Montreal and found a location.”

He bought a deck oven 16 centimetres high, much shorter than the typical 24-inch deck used for bread or pizza. “You can customize the temperature in each deck,” he explains. For his standard pizza crust, he recommends 60 C in the bottom and 10 C in the top. For tomato-sauced pizza, he recommends 60/20. For a potato pizza, 60/10.”

He began to make Roman pizza. “It has existed in Rome since the 1990s and it has continued to progress,” Casale says. “We can perfect the technique using the best flours available and it is also a healthier version than the typical pizza dough. In Montreal, many are used to eating heavier pizza doughs but since they have discovered these lighter alternatives people are loving it and making changes.”

Casale talked with Canadian Pizza about the elements of Roman pizza.

Acid neutral alkaline water is so important for the dough, Casale says. “Protein dissolved with the water creates the gluten. Water in Canada has more calcium, so to bring it to neutral, you need to balance out the pH.”

He thinks of his airy, structured pizza crust as a dinner plate. “You can put any recipe that you want on top of your plate – your dough,” he says. “Your creativity is in the way you see your plate, or your dough.”

“Pizza al taglio is what I think of as the ‘gourmet’ pizza,” Casale says. “To make it, we need to use quality flour, and that means flour with a high percentage of protein.” He prefers Italian flour at a strength of at least 240 W.

The chef recommends putting your flour in the refrigerator immediately to prevent your dough from reaching too high a temperature. The water, too, must be in the fridge. Ideal temperatures for the finished dough are 19 C in summer and 21C in winter. After 72 hours, he forms the dough balls.

He likes whole-wheat flour, which retains many of its minerals. “But it doesn’t matter what type it is – it’s the slow process that helps. The fermentation is everything.” His flour is a mixture of double-zero at 380 W, which is strong.

Temperature is important. Casale says, “At 30 C we wake up the pizza and the dough starts growing. At 70 C the yeast dies. At 100 C the water we put inside the dough starts to evaporate. At 140 C the Maillard reaction starts, he says, referring to a chemical reaction between amino acids and reducing sugars that gives browned food its distinctive flavour, perfume and caramelization.

Roman pizza requires a long maturation and, for this, a strong flour, Casale says. “The stronger the flour is, the more protein the dough has. After 48 hours we finally have our sourdough. We need to take time to let the enzymes in the dough transform ingredients in the dough. The protein and the sugar are broken down from complex to simple.”

“That’s why the pizza is so light,” he says. “If we help our stomach with this maturation, we have no problems with the stomach.”

The yeast plays a key role in the process. “The yeast stays alive by eating the sugar,” Casale says, comparing it to a human being. “When presented with a buffet of food, a human may overeat,” he says. “In the same way, the yeast may eat too much sugar. When the human gets too full, he falls asleep. . . . With the yeast, we let the first 24 hours eat the sugar, then ‘wake him up’ and encourage him to eat more. After another 48 hours asleep, we wake him up again. We reach the 72 hours. The yeast eats all the sugar in the dough.”

“The simplicity is the perfection. It is not easy,” Casale says. “We have to balance that simplicity and improve it. If I do something wrong today I have to study more, understand what’s happening. You have to improve yourself to achieve that result.”

Redipizza draws people from afar to try the pizza, but it is also a bakery. Customers were reminded of that when COVID-19 hit in late March. Temporarily closed and growing bored, Casale, like many Canadians, started baking bread.

“I chose two days a week to make sourdough bread. I was giving free bread to my clients,” he says. “We put the word out through Instagram. People wanted to pay but we wouldn’t take it.”

Of course, the business is better known for its pizza. “We concentrate on the pizza,” Casale says. “It’s our most important product. Some clients ask, why don’t you do pasta or soup? I want to specialize in one thing. If you diversify into too many things, you don’t do your specialty well.”

“When we reopened in June, people said, ‘We missed you, we missed your pizza.’ We missed the clients as well.”

Chef of the Year!

Looking back to October 2019, the chef recalls he felt emotional when he was named Chef of the Year in the Open division in Toronto for his Pizza del bel paese.

That emotion relates to pride in his work and gratitude and love for his family.

Casale and his wife Eva Sardo met in Montreal and have been together since 1995. They have two daughters, Marcela, 7, and Carina, 4.

Michele Casale put in many hours and weeks of training in Italy before even opening Redipizza. His family in Montreal fully supported his quest. And when Marcela was a baby, he made her a promise he had every intention of keeping.

“Poppy’s going to make the best pizza. That was my promise to her,” he says. When he won, his first call was to tell Marcela the exciting news.”

“It took a lot of work, a lot of sacrifice, a lot of persistence,” Casale says.“Everything was not for the money – it was just to achieve, to push myself. It’s all about believing.”