Chef of the Year 2017: Carlo Raillo tackles the gluten-free challenge 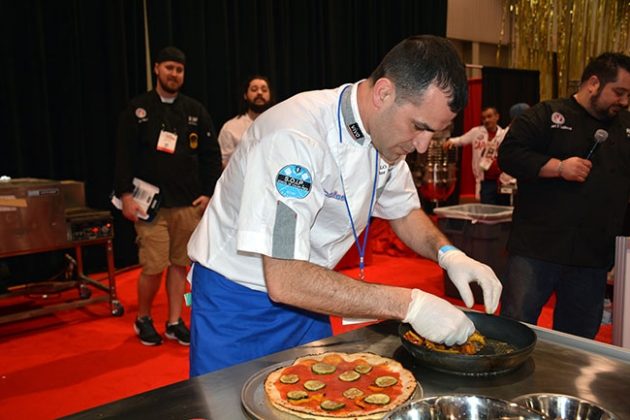 ABOVE: Carlo Raillo was inspired to create a gluten-free vegetarian pizza by customers who asked him to try.

When you talk to Carlo Raillo get ready to listen because you will learn.

The fast-talking pizza chef has a lot to say and the words sometimes tumble out faster than they can be taken in. It’s just one mark of his excitement about the pizza industry.

I caught up with the blur of motion that was Raillo between competing and networking at the International Pizza Expo in Las Vegas in March. The three-time Chef of the Year has made and competed in practically every pizza category out there: non-traditional, Napoletana, breakfast, dessert and now gluten-free. Last October at the Canadian Pizza Show, Raillo presented a tasty gluten-free vegetarian pizza with richly coloured vegetables, and he took his bejewelled pie to Vegas to compete in the gluten-free division – a first for him. The division is a relatively new one that started as an experiment in 2014 and has since grown to match the size of the Napoletana and Pan divisions.

It is not surprising that Raillo chose to explore the still-strong trend this year, but his fearless innovation and desire to always be eyeing new horizons – as well as the mischievous twinkle in his eye – says a lot about his personality.

During our conversation, Raillo – who was lively, fun and dead serious about his craft – shared the thinking behind his concentration on the gluten-free market. Nine out of 10 of people who eat gluten-free follow the diet as a preference and not because they have celiac disease, he said. That’s why he believes its customer base is growing.

Raillo said he was inspired to experiment seriously with gluten-free by customers who asked him to try his hand at gluten-free. In his Chef of the Year entry, he emphasized the need to get beyond the crust that is “cardboard” in taste and texture.

Achieving the right texture is said by many to be the biggest hurdle to making a great gluten-free crust.

But beyond the development stage, which involves seemingly endless flour, starch and gum combinations, Raillo says one often overlooked aspect of developing a crust is proper storage of the dough. “The technique is what’s important,” he says. “It can get dry so fast if you don’t seal it properly.”

Satisfaction is a relative term for the
perfection-driven Raillo, but he told me he was happy with his crust when he saw it had a good rise to it.

“I like it when the crust is high and the dough in the middle is high. But the best gluten-free is when the customer says, ‘Are you sure this is gluten-free?’ ” he said with a smile.

Raillo has worked at several restaurants in Edmonton, among them Parlour Italian Kitchen and Buco Pizzeria + Vino, now is master pizzaiolo at Vivo Ristorante where he is responsible for “everything related to the pizza” – from choosing the menu and the style of pizza to ordering ingredients to preparing the pies.

As you might expect, Raillo had already moved on to what he sees as the next big trend – Roman pizza, which he said has several qualities that appeal to customers.

“Roman style is the future,” he said enthusiastically, encouraging me to visit the Polselli flour booth where he was turning out pies as part of a colourful display that included a pizza topped with edible flowers that caught the eye of many visitors.

Roman-style pizza has been gaining ground over the last couple of years, with shops like Ciao Roma in Woodbridge, Ont., Naroma Pizza Bar in Hamilton, Ont., Trilussa in Vancouver, and on a larger scale, the Famoso chain among its purveyors. Why is there so much interest in Roman-style pizza? Our chef had a few theories.

He compared a typical display of Roman pizza, served in squares “al taglio,” or by the cut, to a colourful cooler full of different gelato flavours adorned with fruit.

“You see this pizza and you just know you want to eat it!”

He said the style is versatile and practical in a fast-casual sort of way. With Roman style, the crust is strong and can hold the toppings. It lasts longer and may be more appealing to eat the next day compared with Napoletana, for example, which has a soft, delicate crust that is best when eaten immediately.

“Classic or Napoletana style is too chewy – you can’t eat it the next day,” he said. “But the Roman you can make three or four hours ahead and heat it up as it is ordered. “Roman style is soft but crunchy at the same time.”

Ultimately it’s about innovation: “I want something new for the customer.”

“To make a good one is not easy,” he added, hinting at the appeal it holds for him – the thrill of the quest.

Raillo made use of his time at Expo to learn from another master, Massimiliano Saieva, who makes Roman pizza that is, in Raillo’s words, “the best in the world.”

Raillo, a self-described fast learner, said that after learning the basics from Saieva he enjoyed puts his own twist on the techniques. For the innovative chef, it’s all about technique. “Making pizza now is easier,” he says. “You have everything else you need. The flours, the equipment, the technology.”

I finished our conversation by asking Raillo, who won his first Canadian title with a breakfast pizza, if he sees opportunities for pizza in that meal, considering how young people seem to be reinventing it. He offered this perspective: “I think it’s very hard to push pizza for breakfast. In Naples people eat pizza for lunch. For five or six years now, people in Canada have been eating pizza for lunch, but they took a long time to develop the habit.”

Raillo, who was born in Calabria, Italy, and returns to work at the family pizzeria every August, has a true world view of pizza. “People think there is just one Napoletana pizza but there are 100 different kinds in Italy.” It’s the same with tomato sauce, which comes in a thousand different styles, he said. “There is not just one red sauce.”

However, I get the feeling that, by constantly exploring new culinary territory, Raillo and other creative pizza chefs are turning that truth upside-down.

ABOVE: Carlo Raillo was inspired to create a gluten-free vegetarian pizza by customers who asked him to try.

Lifestyle Pizza
Carlo Raillo won judges over with his gluten-free, vegetarian pizza. The Canadian market has seen a significant increase in the amount of consumers that have restricted diets, Raillo says, adding that upwards of 12 million Canadians are already eating vegetarian and nine million are on gluten-free diets.

“I want to show how you can maintain all the goodness of a classic pizza even when you think all hope is lost and you have to eat cardboard with tomato sauce.”