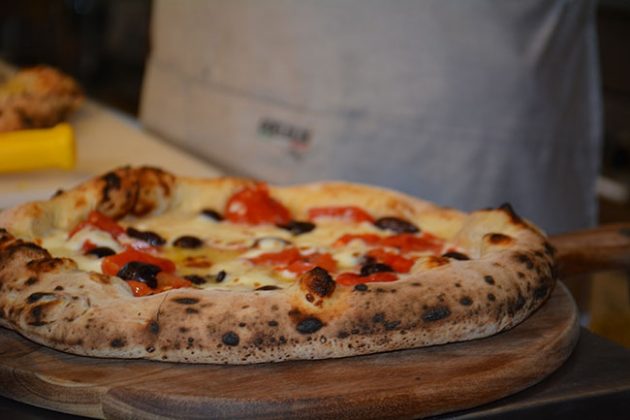 Chef Franco Pepe’s “Margherita ha sbagliato” translates roughly to “Margherita made wrong” and represents his own twist on the traditional Margherita.

Viva Napoli Pizzeria in Toronto was the setting for an exciting demonstration by a renowned Italian chef whose passion it is to master the traditional techniques and put his own spin on them.

Chef Franco Pepe, a third-generation master baker from Italy, held a demonstration as one of several industry and educational events staged by the Italian Chamber of Commerce of Ontario for its annual CentItalia week in Toronto.

Pepe, who has been ranked high in Italian restaurant guides such as Gambero Rosso and Identità Golose, is known for his singular focus on using the highest quality traditional food.

He makes his pizzas using regional Italian flavours to promote the spread of Italian products and producers and is always searching for high-quality and representative products from Alto Casertano, the northern part of the Campania region of Italy he calls home. These include oil made with the olives from his home town of Caiazzo, cured meats from black pigs bred in this area, chickpeas from the surrounding hills, onions from Alife and conciato romano, a kind of seasoned cheese.

“My dialogue is through my flavours and cuisine, and that is how I will communicate with you today,” Pepe told a gathering of about 40 people.

His sons Stefano and Salvatore join him to help with a demonstration of two types of pizza – fried and baked.

For the fried pizza – “pizza fritta” – the dough was fried in olive oil and made with fried rice, which he said is good for the digestion. Ingredients included arugula pesto, grana padano cheese and a sprinkling of dehydrated olives.

It was made, with the help of busy assistants, like a panzerotti and served in a cup by the chef himself.

Pizza number 2 he called the “Margherita ha sbagliato,” which translates roughly to “Margherita made wrong.” It represents his own twist on the traditional Margherita. Pepe took it upon himself to refute the Margherita’s claim to the title of first pizza, instead giving that distinction to a white pizza made with oregano, pork, lard, basil and pecorino cheese. But he said he is remaking it after his own style. The cheese he uses is from Naples and is made of sheep’s milk and wine and stored in a terra cotta jar to build flavour.

It featured tomato purée and a basil reduction he “blitzed together” using basil leaves, salt and extra virgin olive oil.

He arranged buffalo mozzarella on the crust and drew lines with the tomato purée. “Dot the basil purée all over the pizza and serve,” he said through a translator.

To achieve a contrast of raw and cooked tastes and textures, Pepe suggested adding raw tomatoes, basil and olive mixture. Contrasting the cold and hot lets you taste the ingredients, he said. Two years ago it was pizza of the year from Gambero Rosso, an Italian magazine that ranks a list of top chefs every year.

A third pizza featured a lean, soft textured tuna special to Campania and made especially for Pepe in Grani, his restaurant in Caiazzo. He topped it with curled celery.

Chef Franco Pepe’s “Margherita ha sbagliato” translates roughly to “Margherita made wrong” and represents his own twist on the traditional Margherita.

Tony Altimari, co-president of the ICCO, introduced Pepe, saying the chef has almost singlehandedly revived agriculture in Caiazzo, a town of 4,000 people in the Campania region where he grew up. His newest venture, a multifunctional restaurant and product research enterprise, employs many young people in farming and food service. Pepe said he likes to use traditional products that are now forgotten. He credits young people for helping revive some of the old growing techniques and products. “I give thanks for the food and the work that went into it,” he said.

Giustino Iorio, owner of Viva Napoli Pizzeria, which played host to the demo, paid tribute to Pepe’s talent. “You have to have passion. Pizza making is so finicky – just one distraction and the product changes,” he said.

Iorio also said he admired Pepe’s way of doing something for his town and community. “In Italy there are so many pizzerias, so you have to be different,” he said. “That is how Chef Pepe differentiates himself.”

Among other CentItalia week events were master classes by Michelin star chef Cristina Bowerman and chef Ugo Mura, a fundraising and networking dinner dedicated to women in business, and the launch of a book focusing on the origins and culture of pizza.

“This year CentItalia, our week-long program for the promotion of excellence in Italian food and cuisine, focused on authentic pizza,” said Corrado Paina, the ICCO’s executive director. “Special attention was given to tradition, traceability of ingredients and simplicity, which are at the basis of Franco Pepe’s recipes which date back hundreds of years.

“ICCO is proud to present the Pizza Cultura book as well as amazing initiatives like CentItalia, which allow us to act as facilitator of trade exchanges and business development in the food industry.”