Features In the Kitchen Ingredients
Cheese producers take a stand

If cheese is an integral part of your menu then you’ll
want to know that the federal government is proposing new standards for
cheese that will impact how it’s named, how it’s made and what it costs. 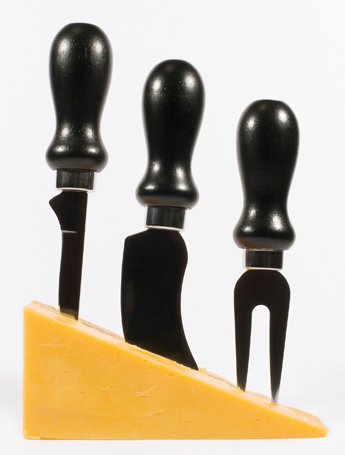 If cheese is an integral part of your menu then you’ll want to know that the federal government is proposing new standards for cheese that will impact how it’s named, how it’s made and what it costs.

For a restaurant industry under pressure to keep food costs down, these standards could make cheese much more expensive than it is currently. The government cites quality and consistency as the reason for initiating their proposed standards. Their rationale, proposal and process have created quite a stir amongst stakeholders in a multitude of industries.

But what are the real benefits of these projected standards and who really benefits? Equally important – what’s the cost financially and politically?

In a nutshell, the Canadian Food Inspection Agency is proposing a new set of standards, which include a set of ratios for the sources of protein in cheese. This was done at the direction of the minister of agriculture. The standards indicate that if it doesn’t have a certain level of fluid milk it can’t be called cheese.

Cheese makers have become very adept at mining the byproducts of the manufacturing process. Milk proteins such as whey and casein are lost during the cheese making process, but cheese manufacturers incorporate them back into the cheese. This innovation allows the manufacturer to minimize waste and improve operational efficiencies.

It also allows them to create lower fat cheeses that are quite palatable. The proposed cheese standards would put an end to the current manufacturing process and force the cheese manufacturers to make significant changes to how they manufacture cheese. Since nothing happens in a vacuum, the restaurant industry will be potentially see an impact in terms of costs, product availability and labelling.

On the flip side, the dairy farmers would now see their sales of fluid milk to the cheese industry grow. The government suggests that the new proposed regulations will provide consumers with a consistent product but still allow cheese manufacturers to create unique products. They suggest that consumers should be able to buy cheese that adheres to specific standards. The feds also highlight the fact that other countries have cheese standards as a rationale for implementing their proposal.

It sounds like a good thing on paper. Rules regarding food production are beneficial especially in this age of concern around food safety – right?

Herein lay the crux of the issue. These proposed cheese standards do not appear to be designed to address any food safety issues or other pressing consumer concerns. Many critics wonder if it’s really more about a government courting votes than anything else.

To imply that Canada currently lacks specified standards for cheese manufacturing is would be misleading.
“There currently are standards for cheese under the Food and Drug Act which spell out for the specific varieties what can and can’t be used to manufacture cheese. The Agricultural Products Act, Dairy Regulations also has standards which include a definition for what is a dairy product,” confirms Kempton Matte, senior vice-president of government relations for Saputo Dairy Products of Canada.

The CFIA has calculated that implementing the proposed standards would raise cheese makers’ costs in raw materials by $72,212,194. The cheese manufacturing industry points out that this estimate doesn’t account for efficiency losses, manufacturing changes (equipment) or loss of revenue due to decreased sales. After all, if the price of cheese increases 30 per cent, which is the estimated impact on the consumer purchase price, people will vote with their wallets and fill their grocery carts with other things.

“Up until this past year, the popular size for a large cheese brick was 600 grams selling for around $5.99 at retail. Recently, a leading marketer of cheese dropped the unit size to 520 g and others followed suit. Now, if they’re selling the same number of units overall, it’s 10 per cent less cheese being sold.  There was a seven per cent price increase in cheese milk passed on two years ago and increases incurred on top of those since. Decreasing the pack size is one way they’ve chosen to adapt to the increasing costs of raw materials,” says Matte.

The restaurant industry is already very aware that cheese is an expensive ingredient. The impact of this proposal on food costs will be dramatic. Dieticians worry that palatable low fat cheeses will be a thing of the past and this could affect the health of Canadians.

Given that these regulations will render most of the cheeses we import unacceptable, economists point out that the proposed standards are in violation of the North American Free Trade Agreement. It’s clear that this proposal has caused an intense and unsupportive reaction from many groups.

So why propose something that seems to have so much down side in relation to any real benefit to the average Canadian? Some cite pre-election posturing as one possible motive.

These standards were quietly put forth last February – right around the time the Conservative government was thinking of calling an election. The agricultural community is a key support group for the Conservative party – especially in the province of Quebec, which has been the “swing province” for the sitting government.

With fluid milk consumption at an even lower per capita consumption level than it was in the ’60s, it’s clear that the dairy industry would strive to find ways to bolster its market share. Many stakeholders were caught off guard by the proposed cheese standards and viewed the process in this instance as uncharacteristically covert.

“There has been incredible input and reaction from stakeholders,” confirms Don Jarvis, president and CEO of the Dairy Processors Association of Canada (DPAC). “These proposed standards don’t just impact cheese sold in the grocery aisle or used in restaurants, they’ll affect all products that have cheese as an ingredient.”

They could also impact the environment since those milk proteins that can no longer be worked back into the cheese will have to be disposed of. Stakeholder groups who have submitted their input include: The Canadian Restaurant Association, the Grocery Association, The Canadian Chamber of Commerce, The Diabetes Association, even dairy councils provincially. All groups have indicated in their formal response to the proposal that this move may be a true “lose/lose” proposition.

The response put forth by the DPAC includes confirmation that for every one per cent increase in the price of cheese there is correspondingly a one per cent drop demand. A lower demand for cheese will not benefit the dairy farmers in the end since they supply the raw materials.

So, where does all of this stand? What can pizzeria operators do to voice concerns? The good news is that the Canadian Restaurant and Foodservices Association is already a key part of this dialogue and has participated actively in the formal response to the government. It’s not known if and when these standards may be implemented but if cheese is a large part of your menu then you may wish to voice your concerns.

“The best place to start is by sending your concerns to the minister of agriculture,” Don Jarvis says.  A copy of your message to your federal member of Parliament would be a great idea as well, he recommends.•