Cauliflower pizza crusts and the rise of plant-based proteins 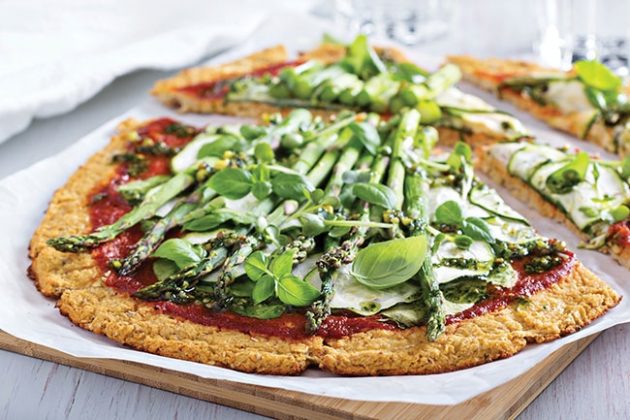 Cauliflower’s bland flavour, colour and texture actually help it function as a chameleon in a recipe. Photo: Adobe Stock

Cauliflower is the biggest thing to happen to pizza crusts since flour. Its bland flavour, colour and texture actually help position cauliflower to function as a chameleon in a recipe, shape-shifting to whatever taste profile is needed.

The trend towards replacing animal-based with plant-based ingredients in recipes appears to be here to stay. Nielsen examined 36 grocery-store categories and found that sales of packaged cauliflower products grew 71 per cent in 2017. Sales growth of this magnitude is remarkable.

WHY ARE PLANT-BASED PROTEINS A TREND?
Plant-based proteins are popular ingredients because consumers are demanding foods that are healthier and better for the environment. Research by Label Insight reported that 67 per cent of Americans say healthy or socially conscious food purchases are a priority for them. Canadians are similarly aligned, with research by Mintel reporting that 63 per cent agree that food choices impact their emotional health and 84 per cent indicate that what they eat impacts their physical well-being.

IS EATING A PLANT-BASED DIET A FAD OR A LONGER-TERM TREND?
Environmental vegetarianism has deeper roots in popular culture than one might think. The book Diet for a Small Planet was published in 1971 and to date has sold more than three million copies. It was one of the first publications to link consumption of animal proteins to an environmental impact and it recommended a diet of plant-based proteins in combinations that provided a healthy, viable substitute for animal proteins. Google reports the top vegan searches in Canada in 2017 were for mac and cheese, lasagna and pizza. One might question the notion that people want their traditional comfort foods to be plant-based, but according to one very popular restaurant chain specializing in plant-based menu items, tradition with a twist is what people crave.

COMFORT FOODS WITH A PLANT-BASED TWIST
Virtuous Pie is a rapidly growing restaurant chain based in Vancouver. With four locations in Vancouver, Toronto and Portland, Ore., this 100 per cent plant-based eating establishment is attracting fans and changing the way we eat.

The restaurant’s mission is to “accelerate the adoption of a plant-based diet by providing delicious, affordable, and fast plant-based food options in an inclusive environment.”

“We definitely find that our customers love menu items that are traditional favourites reinvented using plant-based ingredients,” says Lia Loukas, director of marketing and business development for Virtuous Pie. “The menu item we are most proud of is a Buffalo-style wing called ‘Stranger Wings’ made from cauliflower. People eat it and can’t believe it’s plant-based because they say it tastes so great.”

The pizza crusts are plant-based but not necessarily gluten-free. Gluten-free crusts are available upon request. The pizza menu includes popular formats like Margherita and Calabrese, and Italian meatballs, skillet cookies, mac and cheese and ice cream round out the homespun offering. All menu items are plant-based, and with a fifth location set to open in Victoria in spring of 2019, Virtuous Pie is a bona fide hit with diners.

While many restaurants will want to introduce one or two plant-based menu items instead of having a completely plant-based offering, the decision to offer these items is not without its operational challenges. There are several tasty meat substitutes available through food distributors and, while building a menu around these items is quite viable, the industry still encounters the typical growing pains often associated with a red-hot trend like this. “Beyond Meat is a great product but when large QSR chains decide to offer new menu items using it for their burgers, the supply chain often struggles to keep up with the demand and we see that on our end too,” Loukas says.

Cauliflower may be a great option for pizza crusts, mac and cheese, Buffalo wings and fried rice, but it’s a costly ingredient and supply issues have occurred. California and Arizona supply 90 per cent of the North American cauliflower market and cold snaps combined with increased consumption have driven prices up to as much as $8 per head.

EVERY PLANT-BASED PIZZA NEEDS A CHEESE TOO
Every pizza lover knows that the crust and the meat toppings are only part of the story. Cheese is the crowning glory and great strides are being made in developing plant-based alternatives for dairy products too. Dana McCauley, associate director of New Venture Creation at the University of Guelph Innovation Centre, has a front-row seat for the development of exciting new foods. As a chef, she understands how important mouthfeel, melting point and stretch are to an ingredient such as cheese. Often nuts are used as a base for cheese substitutes, which can be problematic in terms of allergen issues. Other options are being explored as well. “There’s a group at the University of Guelph working on a soy-based goat’s cheese,” McCauley says. The culinary team at Virtuous Pie make all of their plant-based cheeses in house. Although a small wheel of plant-based cheese could retail for around $14, customers looking for these options are happy to pay the premium.

MILLENNIALS DRIVING THE TREND
Mintel surveyed 1,876 people over the age of 18 in the U.S. who ate plant-based proteins and found that while many aged 18-34 agree that plant-based foods are more expensive than others, compared to half of consumers overall, a strong brand image helps justify the extra cost. The survey also found that nearly half confirm the importance of  brand name when buying plant-based foods compared to 40 per cent of the general population. The Mintel survey’s most surprising finding was that more than half of respondents list taste as the top reason for eating a plant-based diet. Other reasons listed were health, the environment, animal protection and diet.

These statistics give us important clues as to how we should market plant-based menu items. The best course of action is to approach the exercise as you would any new menu item: make it taste great, make it operationally efficient and then promote these foods as a fabulous integrated item on your menu –  not as some kind of weird anomaly from a carnival freak show.

As Dana McCauley points out, “Even the term vegan is going by the wayside as these foods become more mainstream.” Also, research from Mattson, a food-consulting firm from California, found consumers prefer the term “plant-based,” which suggests great taste, to “vegan,” which has the aura of deprivation.

INTRODUCING PLANT-BASED MENU ITEMS WITH EASE
If you’re still on the fence about whether plant-based proteins are a fad or a trend, look at who’s driving this shift. Eating a plant-based diet is very prevalent with millennials. Gobranded.com polled more than 17,000 of their community members and found that 15 per cent of millennials follow a plant-based diet all of the time with another 16 per cent eating this way sometimes. This is about six per cent more than the overall population. As Lia Loukas of Virtuous Pie points out, “We see kids bringing their parents into our restaurant to introduce them to this way of eating. The younger generation has so much more access to information – they’re definitely driving this shift.”

Plant-based eating appears to be a trend and not a fad. With younger consumers embracing this culinary style, the future of your business is in their hands. Look for recipes that you can introduce slowly and become known for. Consider value-added formats that will let you test the waters without too much operational hassle. Integrate them into your menu and market them as plant-based, not vegan. Lastly, a little respect to mom who always told us to eat our vegetables. Apparently, kids these days are listening.

Michelle Brisebois is a marketing consultant specializing in e-commerce and digital content strategy and retail/in-store activation. Michelle has worked in the food, pharmaceutical, financial services and wine industries. She can be reached at michelle@textrixconsulting.com.
Print this page