Catherwood and the Kiln: It takes a village 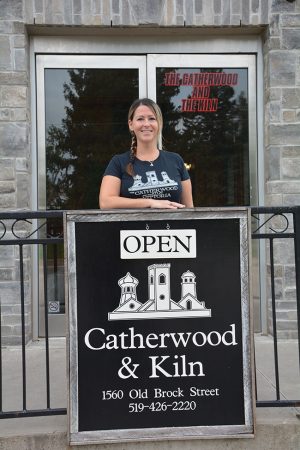 In five-and-a-half years, Jennifer VanGroenigen Hutchings has taken an historic renovation by her father, Bret Hutchings, and run with it to make The Catherwood and the Kiln a fixture in the quaint hamlet of Vittoria, Ont.

The five-year mark is big for restaurants. That’s one reason The Catherwood and the Kiln threw a backyard party last spring to celebrate its milestone.

Jennifer VanGroenigen Hutchings, who operates the pizzeria and art gallery in Vittoria, Ont., remembers the Catherwood’s first day in business like it was yesterday. “It was Feb. 4, 2013, and it was a snowy Monday,” Hutchings, 38, recalls with a smile. “Our first customer was the garbage man. He bought a macaroni salad for $4 and we still have the toonies displayed on the wall,” she says proudly.

Another reason was to thank Vittoria. “We wanted to do something to thank the people of Vittoria,” says the friendly, self-assured entrepreneur. She is referring to the roughly 600 residents of the quaint hamlet, which is located about three miles from Lake Erie and three miles from nearby resort town, Port Dover.

“We had bands in the back yard, did radio ads, changed up the signage,” she tells me from a table in the Catherwood’s inviting 26-seat dining room, which features rich woodwork. “Everyone was ready for an event!”

The neighbourhood party went on all day and into the evening in the grassy back yard and patio behind the pizzeria. Neighbours and customers who came into the shop were encouraged to head to out back to enjoy samples, order pizza and have it brought to them at their patio table, or simply groove to local bands.

The Catherwood is many things to many people in this small but mighty hamlet: a pizzeria, an art gallery, a tourist stop and a hub for community activity.

Norfolk County, where Vittoria is situated, is known for its agriculture and more recently its tourism. People visit the pizzeria while vacationing or on day trips – many who find themselves in nearby Port Dover, enjoying the harbour, fishing in a derby or attending Friday the 13th motorcycle rallies, a local tradition. Hutchings says visitors from as far away as Holland and Germany have visited the shop. “It’s been amazing to have people come from all over the world,” she says.

The hamlet has a distinguished past. It was founded in 1796 and considered the most active and important commercial centre between Niagara Falls and Detroit in the early 1800s. From 1815 to 1825, it was the judicial capital of the district and home of the district courts and the registry offices. The courthouse burned down in 1825, and the courts and registry offices relocated. However, the village, led by an army of motivated organizations such as the Vittoria and District Foundation,
enthusiastically celebrates its history.

All this history inspired the entrepreneur’s father, Bret Hutchings, in 2007, to buy and renovate the handsome 1835 building that once housed the Catherwood Hotel and over the years has been home to other businesses including several general stores. A construction manager, Bret saw the potential for turning the stately structure into a restaurant business that would be operated by his daughter. He clad the building in grey stone and preserved several of its original features.

Guests can glimpse the building’s history in historic photographs on the dining room wall and in a hole in the floor that reveals the old wooden floors and stone basement along with artifacts they found while renovating.

Hutchings is grateful to her dad for staking her the business. “He wanted to do it,” she says. “The way he put it, if I’d been a carpenter he would’ve bought me tools.”

Before taking on this venture, Hutchings notched several years of restaurant experience under her belt. She started her career in food service working at Mr. Muggs, a coffee shop in nearby Delhi, Ont., then worked for New Orleans Pizza in Delhi, followed by a stint beginning at the Ontario chain’s main office in Stratford, Ont. After giving birth to her son, Gerrit, she continued as manager of New Orleans.

HUB FOR THE COMMUNITY
In the summer of 2013, Hutchings purchased the old fire hall at the far side of the same building. Hutchings rents out “The Red Door,” as it was christened by firefighters, for special events such as birthday and anniversary parties, and community events. Renters may use her catering services or hire their own.

Between the pizzeria and The Red Door is the recently established Norfolk Wedding Lounge, a space for weddings complete with DJ and other related services. The businesses all complement one another, Hutchings says.

The Catherwood and other local businesses feed hungry bargain hunters during Vittoria’s community-wide yard sale in June. It’s all hands on deck for such special events, and Hutchings relies on the help of her sister Alex, brother Kristofer, cousin Jessica, son Gerrit (who grates the cheese), and mom, Sam. Depending on the day, they are her extra hands in the pizzeria, her on-call babysitters and her moral support. “My family make it possible for me to do what I do,” she says.

She pays that support forward in spades by becoming an important member of the community is by providing pizza to local public schools for their weekly lunch programs, business they are happy to share with other area pizzerias.

They also donate gift cards to local charity events and causes such as school raffles and the Vittoria and District Foundation’s annual spaghetti dinner, to which she donates the enviable prize of a prize of one pizza a month for a year.

She has lived upstairs above the shop for the last four years. “That makes it so much easier,” she says. There is a tradeoff: they are open long hours from 9 to 9 every day. But the strategy makes sense to Hutchings. “We’re here making dough anyway, so why not sell pizza?”

MENU OF ‘BESTSELLERS’
“Our pizza is made fresh every day using a special blend of cheeses – not many people are doing that,” she continues. Hutchings buys a lot of ingredients from Morton Wholesale, whose “Ontario Grass Roots Program” promotes and distributes Ontario ingredients in order to support Ontario farmers and businesses.

Their Canadian, Deluxe, BBQ Chicken Bacon Ranch and Gourmet Caesar pizzas are bestsellers and are clearly marked as such on the menu. This is a deliberate strategy to make it easy for customers to order and easy for staff to assist them.

“There’s a lot to learn on the menu and it changes from time to time,” she says. “This way, our servers can just point to the popular items.”

Subs are a key part of the pizzeria’s menu, and the Nitehawk is by far the bestseller, featuring salami, mozzarella, house pickled slaw on a toasted, freshly baked bun. The sandwich is named for the local Nitehawk Café, which operated for many years just outside of Vittoria. Hutchings was thrilled when the original owner visited the store and pronounced her sub worthy of the name.

They have an open kitchen and customers enjoy watching their pizzas being made. The setup also helps when dealing with customers because staff can see all who enter the shop, say hello and let customers know they will be helped soon. “No one’s going without being acknowledged here.”

In five-and-a-half years, Jennifer VanGroenigen Hutchings has taken an historic renovation by her father, Bret Hutchings, and run with it to make The Catherwood and the Kiln a fixture in the quaint hamlet of Vittoria, Ont.

ARTS CONNECTION
As we sit in the warm and inviting dining room, Hutchings points to a corner where they used to sell pop, snacks and other grocery items, but now showcases the artwork of local artists. “People can look at the artwork while they wait for their pizza or after eating,” she says.

Hutchings thinks it’s important to support local artists and artisans and she does that in a big way by giving them a permanent gallery. It becomes clear just how big a part of this venture local arts and crafts are when Hutchings ushers me to the “Kiln” out back.

Originally used for cold storage, the green, red and white outbuilding has been re-clad to resemble a tobacco kiln. This is a nod to the local heritage of Norfolk County, which was known for growing tobacco, harvesting it and curing it in the now rare tar-paper-covered kilns. A short documentary film and mini kilns in the form of birdhouses, among the treasures for sale, remind visitors of the industry’s past.

In this outbuilding they display and sell the work of about 50 local artists. She says often the drawings, paintings and folk art are often bought by returning customers who were taken with the work on their first visit.

TEAM EFFORT AND ‘MUTUAL OBLIGATION’
As with any independent business, there are challenges. Catherwood raised its prices last year before the initial minimum wage hike went into effect in Ontario. Hutchings worried about how customers would react to the inevitable price hike. But the price update has been smooth, she says, with no pushback from customers.

Having great, reliable staff helps ease the burdens of running a business, says Hutchings, who has 14 or more staff at any given time, including two dishwashers. “I like to give kids their first shot,” she says.

She is happy to have good, reliable staff on hand, including manager Kelsey Chadwick. “Now I don’t have to work from open to close. I have more energy,” she says with a smile. Her goal is to cross-train everyone in the shop so the work runs smoothly when she’s not there.

They take all orders by phone over two phone lines. “It’s more personal,” she says. “You have contact and you can get to know repeat customers. People appreciate people remembering their order and acknowledging who they are.”

And although training people on phone etiquette can be a challenge, using this method also helps ensure the orders are accurate. They have a system of check marks that helps make sure no detail of an order is overlooked, she adds.

The shop does takeout and pickup orders. They will deliver if asked – she usually does this personally – but they don’t promote the service. She has been approached by third-party services and is keeping that in mind for the future.

For now, business is good, the system they have seems to be working, and Hutchings has managed to hold on to good employees – no small feat in the pizza business. Her strategy with new hires is to commit to giving them a minimum number of hours. It’s an agreement of what she calls “mutual obligation” between her and employees: they commit to being there for their shift and she commits to giving them the hours.

“I tell them, ‘I want you to stay here because you want to be here,’ ” she says.

She is pleased with her staff, whom she describes as young and eager. “I hire for personality. No interview – we do a first shift,” she says. “A person can be shy, that’s OK. We start them on dishes.”

“It’s a team effort. We all do all jobs. I don’t ask others to do anything I won’t do myself,” she adds.

Hutchings is beginning to reap the benefits of her hard work and to relax and enjoy pride of place among her neighbours.

“This is not a job,” she assures me. “It brings me joy for people to know my name.”