Canadians in the house

Pizzeria operators were out in force at Pizza Expo 2016 to find tools, tips and inspiration 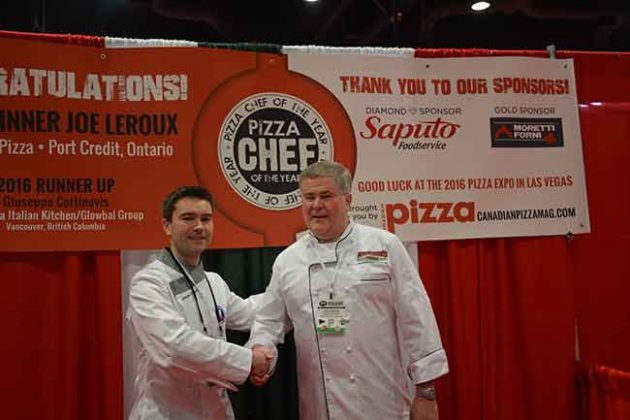 Canadians created a strong impression at Pizza Expo 2016, making their mark in the International Pizza Challenge, at education sessions and around the show floor.

The folks at Pizza Today and Emerald Expositions had another success in Expo 2016, held March 7-10 in Las Vegas.

Eight Canadian competitors vied for glory in the International Pizza Challenge – five of those in the Non-Traditional category.

Several Canadians stopped by the Canadian Pizza magazine booth to say hello – including Giovanni Sudano of Jim’s Pizza Palace in Cobourg, Ont., who told us about his cauliflower crust and dessert
pizzas, Richard Ames of Daddio’s in Grande Prairie, Alta., who is eyeing an international expansion, Ross MacKinnon of Pizzaville in Orillia, Ont., who was looking for business ideas, and an enthusiastic team from Pizzeria Defina in Toronto who were there supporting their competing chefs.

Most exhibitors we spoke with said they had noticed more Canadian traffic than usual. Could this translate into greater availability of products in future?

As usual, Canadian Pizza magazine’s top chefs performed well in the International Pizza Challenge. Chef of the Year Joe Leroux re-created his fabulous pierogi-inspired “Chi mangia bene, viva bene” pie for a final score of 23.98. Runner-up Giuseppe Cortinovis made a pie featuring Taleggio cheese and caramelized white onion to take second place in the international division of the Traditional category with a score of 18.33.

“Competing was a high,” said Leroux.

Pizzeria Defina’s Isaac Macdougall took first place in the international division of the Non-Traditional category with a lobster bisque pie. The ever-inventive Meghan O’Dea of Pi Eatery in St. John took third in the same category with a tasty pizza that included duck fat.

Other competitors included Ashley Davis of Morris East in Halifax, Tony Vacchio of Zolas in Ottawa, Danilo Lupo of Pizzeria Defina in Toronto, and past Chef of the Year Carlo Raillo of Buca Pizzeria & Vino in St. Albert, Alta.

Hunting for quality hires
A talk on how to hire millennial employees that are right for your pizzeria generated plenty of interest. The speaker, Eric Chester, a former high school technology and trade teacher and business author, suggested focusing on your best employees to gain clues to what you like in an employee and to get good referrals. Change your approach from fishing (placing an ad and hoping it pays off) to hunting, the targets being friends of current good employees, schools and competitors’ workers, Chester said.

“We don’t have a skills gap; we have a core values gap,” he said, noting that most employers say they value hard skills when what they really value are so-called soft skills like a positive attitude, reliability, initiative, respect, integrity and gratitude. These are not soft skills but non-negotiables, Chester argued. Together they make up work ethic, which in its simplest definition, is a worker knowing what to do and doing it. As a supervisor you have to teach and to lead by example.

Hunt for friends of good employees, he suggested. Look for someone who already has a job, get referrals perhaps by offering referral bonuses and continuation bonuses. People stay at a job longer if they’re happy, he said.

Hunt in the schools. Foster relationships with school staff – such as tech teachers like him – and ask them for referrals. Business and trade teachers are in the business of matching students up with potential employers and may have someone perfect in mind.

Making a one-to-one connection with your employees is an important strategy, he said. Get some index cards and start a short profile of each employee, adding information as you learn it. The more you know about your employees, the more you’ll learn about what makes them good employees and the more ideas you’ll have about how to motivate them, Chester said in conclusion.

Dessert pizza has its day
As usual, Expo yielded several delectable demos. One such fun and practical demo by Theo Kalogeracos – dubbed “The Art of Dessert Pizza” – offered insight into several stunning dessert pizzas. Kalogeracos, a former International Pizza Challenge champ who hails from Australia, said dessert pizzas are huge Down Under and have potential to draw in customers looking for an exciting dessert option. His peanut butter and banana pizza, red velvet pizza, and a showstopper he calls “The Snowman” all can be made using either out-of-the-box cake mixes or from-scratch formulas.

Kalogeracos made three delectable pizzas: A peanut butter-banana pie featuring peanut butter, sliced bananas (they can be brown), maple syrup, peanuts and icing sugar. The Snowman, a crowd pleaser, incorporated coconut milk, vanilla cake mix, shredded coconut, chocolate syrup and ice cream. Last up was a red velvet pie that made use of a store-bought cake mix. The former pastry chef said he typically makes his pizzas from scratch, in this case using beet juice left over from other dishes, but also encouraged the use of ready-made cake mixes.

The hungry audience devoured the advice – and, yes, the pizza, which happily coincided with mid-morning coffee break.

With pizzeria operators likewise gobbling up newfound ideas and tips, it’s a sure bet that at least some of what happened in Vegas won’t stay in Vegas.