Lots to see, learn and taste at our annual industry show 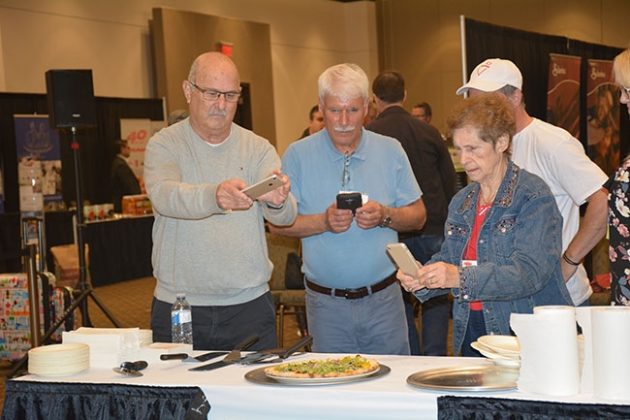 In the Chef of the Year competition area, the pizza paparazzi close in for one last beauty shot before hungry tasters descend.

The Canadian Pizza Show marked its fourth year with a record attendance of 215. The trade event, which is the only one dedicated to the fresh pizza industry in Canada, was held at the International Centre in Toronto on Oct. 16.

This year’s audience was a mix of pizzaiolos and people interested in opening a pizzeria. Attendees were treated to a great variety of exhibitors, excitement on the competition show floor and educational sessions.

And the winner is…
Matteo Cesarotto said he never dreamed he’d go home Chef of the Year, and he never imagined he’d be facing pal Giuseppe Cortinovis in a final bake-off.

The two friends won trips to Las Vegas to compete in the 2018 International Pizza Challenge at Pizza Expo. In addition, Cesarotto picked up $1,000.

In the Open division it was Cortinovis of Nightingale Restaurant in Vancouver in first place; Antonio Rupolo of Gusto Pizzaria in Brampton, Ont., in second, and Alon Zohar of XO Pizza in Concord, Ont., rounding out the top three.

Check out our chefs gallery in the next issue.

Moderator of the Seasonal challenge Diana Cline, owner of Diana’s Cucina and Lounge in Winnipeg and a multiple award-winning pizza chef, talked with competitors as they prepared pizzas built around holidays and special occasions, noting there is lots of potential for attracting adventurous customers looking for a fun themed pizza experience.

Giorgio Taverniti, owner of Frank’s Pizza House in Toronto, clocked in ahead of the Somerset dough sheeter to win the first Sheeter Beater Challenge sponsored by Somerset and SP Sales (distributor).

Taverniti served as a judge for the Chef of the Year competitions, along with award-winning pizza chef Marina Rondinelli, former Chef of the Year Tom Stankiewicz, owner of Bondi’s Pizza in London, Ont., and current Chef of the Year Carlo Raillo, head chef at Vivo Ristorante in Edmonton.

Back to school
The education component to this year’s show comprised two important facets of today’s pizza business: customer service and market trends.

Longtime industry veteran and pizza chef extraordinaire Diana Cline shared her top tips for capturing the vegan pizza market in your community. Cline, who developed her own vegan cheese as part of her foray into the growing niche, gave the audience ideas for marinating and seasoning vegetables and using oven-roasted pulses like chickpeas and various beans. Cline has written about the vegetarian/vegan market in her column for this edition on page 11.

Jeff Dover and Geoff Wilson, principals of FS Strategy management consulting firm brought next-level inspiration to the show floor with a focus on the “premiumization” of ingredients, how to effectively increase prices and menu strategy for greater profits.

In the Chef of the Year competition area, the pizza paparazzi close in for one last beauty shot before hungry tasters descend.

A tour of the show floor
Exhibitors brought an exciting array of pizza products and services to Canada’s only pizza-dedicated event. Thank you to Lallemand, LeSaffre and Gay-Lea for providing a full day’s supply of coffee and tea on the show floor (it was a busy spot).

Viau and their distributor Daniel’s: The first company to produce and market dry cured pepperoni in Canada, this large manufacturer of meat toppings is still best known for its market share in pepperoni.

Haymach: Specializes in new and used equipment for front and back of the house. Ontario based but ships worldwide.

Valassis: A marketing specialist in quick-service restaurants and pizzerias on the print and digital side, the booth showed a number of samples of company capabilities.

Ardent Mills: The company, a gold sponsor of the show, was educating the industry about its Primo Mulino Neapolitan complete pizza flour mix designed for thin-crust pies cooked in high-temperature ovens in 60 to 90 seconds. Pizza makers just add water and yeast to the mix.

Krinos: This gourmet toppings specialist was highlighting its olives and feta cheese, while introducing its new cubed feta product.

Marsal & Sons pizza ovens: As a sponsor, Marsal was showcasing double brick ovens doing double time as one of two available for Chef of the Year competitors. The oven uses two different types of brick to create an even heating environment that absorbs moisture. The MB series gas-fired ovens feature a unique burner design that eliminates the need to spin and rotate the pizzas.

Lallemand Baking Solutions: Attendees could stop by for a whiff of their new beer and wine Florapan aromatic yeast line for added flavour in your finished product. For pizza, they can provide both flavour and leavening. Dough makers can choose from beer, white wine or French red wine.

LeSaffre Yeast: The booth focus centred on the company’s SAF Pro Relax +YF deactivated yeast. The yeast is designed to improve the handling of the dough, and reduce shrinking and tearing. Produces a mild yeast flavour.

Finica Food Specialties: Local goat cheese and Canadian-made cow mozzarella were up for sampling alongside a showcase of premium menu toppings from Italy.

Technical Standards & Safety Authority (TSSA): The safety authority was on hand with messaging about “lowering the heat in the kitchen” through proper ventilation, equipment, technicians and fire-extinguishing systems.

Chase Global Foods: Representing Sugardale and Burke brands, which include fully cooked pork and beef in sliced and dry-cured formats. Some of the latest Burke products Chase Global is promoting for 2018 include a cooked sriracha sausage crumble and a cooked breakfast sausage crumble. The booth was bringing attention to Burke’s hand-pinched style sausage for pizza. Designed to be user-friendly and safe/fully-cooked.

Pizzabot: This text message ordering system is based in Ontario and brand new to the market.

Hobart: The equipment manufacturer showcased its entry-level pizza prep table, which exceeds NSF standards for refrigeration. Its dishwasher on the show floor carried energy-recovery technology that captures the heat used to wash the dishes, thereby saving usage on the hot water tank.

Salamina: Quebec-based experts in protein for pizza. MSG-,
gluten-, peanut- and lactose-free. The booth focused on pre-cooked bacon and pepperoni.

Ak-Pak: A pizza ingredient importer based out of Quebec.

Message on Hold: This service sells on-hold advertisements in North America to raise your average ticket by upselling while also reducing hangups. Specializes in the pizza industry.

Olymel: The foodservice company reps were serving and sharing wings and things with the crowd and exhibitors. Olymel was showcasing its add-ons designed to build the average cheque.

Bakers Journal: Attendees could pick up a copy of Canada’s trade publication dedicated to bakers for helpful dough and dessert tips.

Faema (Chef of the Year gold sponsor): Canadian Pizza learned that the Faema Culinary Academy will be taking students starting in early winter. Courses in pizza, barista skills and gelato will be offered at the company’s Dupont Street showroom in Toronto.

Moretti Forni (Chef of the Year gold sponsor): As a Chef of the Year sponsor, an oven was fired up for competition action. Customer focus was on the company’s economy iDeck ovens.

Favero Mills: The booth highlighted its Antica Pinza Romaina flour, which incorporates wheat, rice and spelt. The company also sells thermodynamically sealed flatbreads made out of the flour and bean flour that come frozen and bake up soft on the inside and crispy on the outside (true to taste test).

PizzaAR (Ecocarrier): The company turns the pizza box into a source of income – that’s been done – but the logo on the box becomes a dynamic interactive moving ad when the phone app is hovered over it (a house for sale can turn into a virtual tour on the phone). Show video straight from the box. AR/VR/MR -enabled. Captures data. Location aware. Cool!

Crown Cookware: Only large Canadian-made and -owned manufacturer of pizza pans, racks and other commercial cookware. Been in the business for 37 years, and do custom metal work. Among the products on display were Covertex delivery bags.

Splice Digital: The team, which provides marketing and creative services to businesses, is focused on website development and
mobile experiences.