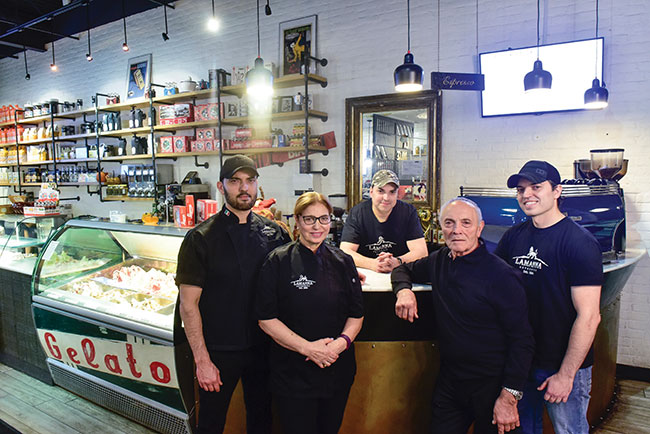 At Lamanna’s Bakery the Big Slice is a Big Deal. The original Big Slice is just over two feet long and about 18 inches wide and covered in pepperoni. Over the years the bakery has created many variations on the theme by loading their Big Slice with sweet toppings that are delicious in their own right, including pink-iced (Simpsons) doughnuts, churros, custard tarts, gelato and torrone (almond nougat), pumpkin pie slices, birthday cake slices (complete with lit candles).

These and about 1,500 other eye-catching, drool-inducing, over-the-top images are getting noticed by lovers of pizza and baked goods from Toronto and well beyond.

Lamanna’s Bakery may be known for its photogenic Big Slices, but it is a well-respected authentic Italian family bakery with a tight connection to its Scarborough community of Rouge Hill and deep roots in Italy. After separate, decades-long careers in baking starting in Italy and ending in Toronto, husband-and-wife team Peter and Rosa Lamanna opened their own bakery in 2004.

Among other positions and projects, Peter worked at Canada Bread and Rosa had run a popular wedding cakes business for many years. Petercame from Monteleone di Puglia in and Rosa from Ragusa, Sicily, to make their home in Toronto in the 1950s.

The original idea was to open a small boutique bakery to showcase favourite family recipes, says David Lamanna, the youngest of three sons who work in the business with their parents.

“My grandparents had a vineyard in Sicily,” Lamanna says. “Generations of recipes accumulated. My brothers and I would go to the vineyard, and we were inspired to see how they ran the business. My grandfather ran the business very personally and, when we put our name on the door of our bakery, we didn’t know it at the time but that’s what we were doing. Everything we do is an extension of us. We took that personally.”

“They had a wood-fired oven and a stone oven, and my grandmother would make amazing pizzas, drying her own tomatoes. A lot of planning and effort went into every meal. It was a joyous experience. We wanted to carry that on.”

David’s oldest brother Joe opened the bakery with his parents, then Lorenzo joined, and finally, because it got so busy, David came on board. The three brothers brought different strengths to their roles.

“We brought a lot of that business side to the bakery. I worked in sales and a lot of the things I learned I could apply to the bakery. We all apprenticed with my parents. Joe’s focus is on scratch-made gelato and the coffee side of the business. Lorenzo focuses on the baking. He has a natural talent for this,” Lamanna says.

Of working together: “My brothers are both really creative. Joe has a really strong sense of retail. Lorenzo’s outrageous with his creative thinking. I have a serious business side. When we brainstorm come up with ideas it’s fun to see the reaction before we get to a new product.”

They found themselves working together and ended up being closer. “I feel blessed we could do that,” David says.

In the beginning just the five of them. Then the bakery took off – this was even before the Big Slice and Food Network, Lamanna says.

Says Lamanna, “It’s interesting that we had our hands on every single piece of product. Now we have a staff of about 30 people [slightly lower than their pre-COVID numbers]. Now a lot of what we do is manage what other people do. You think you’ll always be hands-on but things change.”

Peter and Rosa are retired but still very involved in the business, he says. They are the first to come and the last to leave. “My dad does the doughs and bases every night from scratch,” Lamanna says. “Their presence really brings the bakery together. It’s kind of been a real joy working with them. Most people don’t get to do that.”

Joe, Lorenzo and David have all completed courses in baking, but David believes “there is nothing like learning from someone who has that much experience on a daily basis.”

Lamanna’s bakery and pizza business have grown in tandem. Their staples have been baked goods, pizza, gelato, hot foods, coffee and the deli. “Bakery and pizza I think were always the biggest,” he says. “We had to let go of deli in order to expand the pizza business. We’ve always explored the idea of sweet and savoury with desserts. For example, blueberry on focaccia just seemed normal to us.”

Lamanna’s Bakery is famous for its striking photos of savoury and sweet treats, such as cannoli. PHOTO: LAMANNA’S BAKERY

The Big Slice
Lorenzo is the one behind the dessert-topped slices and the Big Slice. “He thought it was a fun idea. The buttercream base was fantastic and we tried it with different toppings – doughnuts, churros. Chocolate bases are good – Nutella is a natural fit).

At first it was just a fun distraction, a private joke. Social media, especially Instagram and more recently TikTok, helped it to reach a wider audience.

“We first promoted the idea by posting a photo of Joe taking a bite of the Big Slice pepperoni pizza. That’s when we exposed ourselves to the public. People didn’t know if we were joking. It’s really fun – you can’t take it too seriously. People come in as a group and order a Big Slice and have this challenge to see if they can finish it.”

They had to custom-design a specific box size to fit the large size. “I thought, ‘How do we package this?’ Lamanna says. “In the beginning we found the biggest pizza boxes we could. That wasn’t working, so then we had specific big-slice boxes made. They are a little over two feet long and about 18 inches wide.

Marketing and branding
The bakery is located in the east end of Toronto in Rouge Hill near the border of Pickering and Scarborough. “Our customer base is real diverse,” he says. “The same is true of our employees. I would say the main group is families – it’s a suburban neighbourhood.”

“Most of our marketing is social media. However, word of mouth number 1 focus. In-store sampling is a good way to introduce new products.

Recently, when they decided to rebrand, they shot for the moon and reached out to a New York City designer they admired, Jon Contino. “We like him because he’s edgy. We reached out. He was so taken aback by what we do. He said, ‘I have to be part of this.’ We’ve explored other designers and ideas, but nothing worked until Jon came along. The look is edgy but true to ourselves.”

He describes the look: “Colours were important to us – red, gold, chocolate. The main brand was the mountain lion – a tribute to Monteleone (which literally means lion on a mountain). It’s our nod to where our brand came from: family. We didn’t want something too cutesy. That’s not for us.”

Their pizza boxes, featuring a stylized lion’s face, are a great example of the new branding.

David Lamanna does most of the photography, but he seeks out help from staff. “Usually if I find that one of the employees has a natural ability, I’ll kind of take them under my wing. I use an iPhone sometimes, but I’ve got a good camera and equipment. Lighting is most important thing for photography. We’re lucky we have a great space for that.”

The store has been renovated three times – the latest an expansion next door to grow the pizza side of the business. The last reno was by Commute, a Toronto company that designs nightclubs and other business but had not designed a bakery. As with Jon Contino, the connection with principal designer Hamid Samad was instant.

“He said that was the first time anyone’s ever brought their parents to a meeting,” Lamanna says with a chuckle. “Everyone appreciates the family dynamics.”

“I think that is another part of branding who we are and bringing the bakery up to date.”

Lamanna believes developing your branding should be given proper time and attention: “It’s important to invest in it, and not just make it an afterthought. Put some effort into presenting your best self so people can appreciate your brand. You want to stand out – it’s easy just to blend in.

“Having a call to action is pretty huge on social media. Branding comes from consistency that’s where you start to evolve into a brand. Listening to customers, modifying along the way – not being so egotistical that you won’t change. Have fun with it – and others will have fun with it.

“Don’t underestimate the power of branding – even down to that coffee cup on the subway. I don’t think people really think about that, they just think about baking a pie. Branding is expensive, so you really have to tailor your branding to one product that is special. And look for natural collaborations.

“At the end of the day, it goes back to the customer and offering something you really believe in. I want people to continue to tell their friends about us.”

Bestsellers
Bakery bestsellers are traditional pastries such as lobster tails, sfoglia, cannoli and napoleons. On the savoury side, it’s their lasagna and pizzas. There are many pizza options – margherita, quattro stagioni, caprese, grilled cheese and Hawaiian) among them – but the most popular are pepperoni, cacio e pepe.

Lamanna describes their crust as a thicker, Sicilian style of pizza. They use two old recipes. The first is from a pizzeria operator in Toronto who consulted with them in the 1970s and which they modified to suit their pizza sizes. The second is their grandmother’s recipe, which they modified to make a big batch recipe.

“We’re actually experimenting with other styles and once we expand the pizza side we’ll see which ones work best for clients,” Lamanna adds.

Social media
Lamanna’s has an enviable social media presence on social media gained through posting consistently and engaging with followers in creative ways.

A post from June 2021 asking for customer feedback on a chocolate-treat-covered Big Slice is a good example of how to interact with followers: “CONTEST! Help us name this new pizza concept right out of Sunday’s test kitchen! If your name is chosen first you can win this pizza! Also let us know if we should add this to the menu! #lamannas #lamannabakery”

When John Catucci came to film an episode of his Food Network TV show Big Food Bucket List! they served him poutine-topped Big Slice and a Great Canadian loaded with bacon, pancakes, maple syrup and butter pats. Clearly delighted, Catucci chats with customers as they share a Big Slice and describe what they like about Lamanna’s pizza. That video has been viewed more than 13,000 times.

The Lamannas have had fun with their Big Slice, appearing on Good Morning America and Toronto’s Cityline TV shows and collaborating memorably with Warner Brothers by branding a box for them with their Godzilla Vs. Kong logo.

“We’ve always been a traditional Italian bakery with traditional recipes,” Lamanna says. “We don’t take ourselves too seriously and we like doing outrageous things. As long as we’re committed to quality, I think it’s OK.”  | CP